Hi, sorry if I speak badly, use google translator.
The game does not allow high resolutions, and dgvoodoo by an error in the menu.
How can I fix it?

Which version of dgVoodoo are you using?
I tried this game with dgV 2.54 and it works.
It's true that it only works with default CPL settings, with 'Unspecified' scaling mode. So, upscaling the resolution and such won't work because this game doesn't like when its window get resized, etc.

(Altough the game worked for me even natively, on Win10).

I needed dgvoodoo to increase the resolution, because 640x480 looks bad.

These are the settings.

Does the game run for you natively?

Without dgvoodoo yes, but the maximum resolution of the game is 640x480, too low, I wanted to force it with dgvoodoo

I have same problem with this game. Another Disney game Monsters Inc. works fine with dgVoodoo and resolution is upscaled good. Can anything be done to fix this in A Bug's Life?

OCG, i solved by modifying the exe, try it.

OCG, i solved by modifying the exe, try it.

That works for me at least:

Though if I wanted to play this game I would probably just emulate the PSX version. The PC version just looks to be the PSX emulated version anyway: you'll see plenty of the kind of 3D rendering artifacts you would expect from a PSX in this port and no texture filtering (forcing with dgVoodoo2 results in more artifacts).

IIRC Bug's Life (or maybe Toy Story 2, cant remember) have the Playstation IDS inside the disc. Not the discs but the IDS in a dummy file.

Lots of games from those days had a launcher with options like z-buffer or texture filtering. Options that dont make sense for PC but they have a lot of sense for Playstation, a console that lacked all of those features as well as many more. 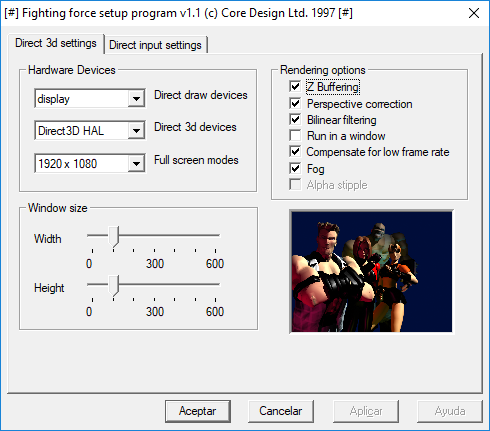