No , that wasnt the issue. FOr some reason, my display drivers were uninstalled... No idea why. I reinstalled them and most stuff works . The only game not working seems to be Stubbs the Zombie. Starts up but crashes or even laods the game but missing somegraphics like my character model. Though previously it wouldnt even start up so this is a start in the right direction.

Some Thrift store retro PC game pickups from the past week

I have Beach Head 2002 in big box, but I had to have this small box when I saw it. The cashier even gave it to me for free since the disc was missing.

Shivers Two is sealed and I nearly passed on the card making software but it is from Sierra so i grabbed it.

The CEs had everything and all but the game cds were sealed.

A couple lucas arts games in with the boardgames at value village.

So years ago I decided to go on a quest to collect the original big box edition of every single Jane's combat simulator PC game. It took a few months and a lot of time on eBay looking for only top quality specimens, but I eventually got them all. They all contain complete original documentation like spiral bound manuals, maps, software info, etc. I believe the collection is complete. The only ones I did not acquire are the collections such as Naval Warfare and Air Superiority, because those are redundant of the original individual versions. I did not get the "classics" versions as those are just the CD and I only cared about the originals.

I also have a new big box Total Annihilation Kingdoms, and a whole pile of small box and loose games in jewel cases and sleeves. I have a Redump project approved Plextor external CD/DVD drive which I'm planning to use to properly archive all this stuff. 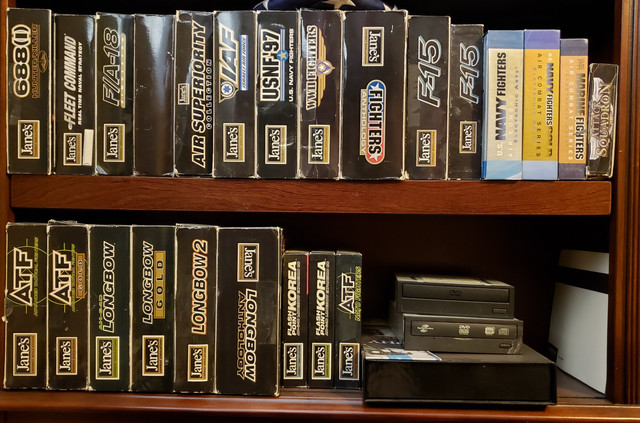 Some games and shit.

I just pulled this out of storage today. Was looking for something else and came across it in a box of my old stuff.

I'm going to see if any of the game demos and, in particular, TrueSpace works with Win 10.

Welp, so far TrueSpace refuses to install on Win10
Daytona USA complains of not being compatible with NT 6.2
Moto Racer installed without a hitch, however I can't set my display to 16 bit so it won't run. I'll probably try it out on one of my Win7 machines, I may be able to get it to 16 bit color then.

Intersting. This one was new to me.

The i740 chip was everywhere back then. All of the major board vendors made an i740 based-board and quite a few of the cheapie "white box"-type companies did as well. I've written this about it here a while back, but the OpenGL ICD for the i740 had full OpenGL compatibility so the day Quake 3 Arena Test was released, it was one of only a few cards that could run it. My Permedia 2 based STB Glyder Max II being one of the others. The successor, the i752, was also a competent 3D chip but I've only ever seen one company release a board based on one (Joytech) and that core was ultimately integrated into the i810 P3 chipset (though it's 3D performance is a bit lower than the standalone i752 board).

Silly Rabbit - Q3test is for Macs!

All those Jane's simulations.. This is my dream collection.

I've just picked up a 60$ game pack and I checked them out on my main XP rig:

Prince of Persia 3D (2CDs and manual, no case)
I'm a fan of the series, but I never played this. For a long time I was unaware that after PoP2 and before PoP:SoT there was a 3D episode.
It installs, but it crashes on start, even in compatibility mode.

Gorky 17
Some Polish RPG I've heard a lot about in the earlier half of the noughties, but never tried yet. Installs and plays.

Colin McRae Rally 2.0
One of my most played racing game. I never owned a legal copy until now. It's very scratched, but installs and plays.
It's as good as I remember. Can't wait to unlock the Morris Mini. I remember it lacked power, but had insane cornering so I ran my fastest times with this one.

Colin McRae Rally 2005
I've played a couple of times, but for whatever reason I've never started the championship mode. Back then there was a lot of games I was interested in so I've rarely beaten any of them before moving on to the next.
It looks like it's protected with StarForce. Shame.

Worms 2 + Armageddon pack
I was only interested in Armageddon, but it was 2 for the price of 1. That Sold Out installer is hell, it only installs with the game's own installer. It starts, but black screens when I try to start a game.

Icewind Dale with Heart of Winter expansion pack
I have it on GoG, but I always wanted a retail copy. It's in mint condition. No printed manual sadly.

Icewind Dale II
Also own the GoG version. The manual for this one is a freakin' Bible! It's at least 1cm thick barely fits in the case. Also in mint condition.

Baldur's Gate 2 Shadows of Amn
Sadly, no manual, also own on GoG. This was probably my first RPG. I remember back then I got the demo with a gaming magazine and I was surprised it was a full CD. I didn't know any english and I barely find my way out of the character creation. I wasn't ready for the game in more than one ways. I'm still impressed that a game in 2000 released in 4CDs.

Tomb Raider: Underworld
Not part of this pack, but a recent purchase. An early CD Project release with cardboard outer box, art book and bonus disc. It puts some of my Collector's Editions to shame (looking at you, Need for Speed: Carbon).

Recently, I got the Warcraft III Battle Chest (small box version). It is a nice package, pity they left out the "tech trees" pamphlet.

Also got the Russian jewel case releases of Warcraft III (official localization by SoftClub), the Russian version of "Heroes of Might & Magic Platinum Collection" (comes on 3 CDs instead of 4 like the English release), and the original big boxes of Virtual Pool & Virtual Snooker.

I don't frequently get big boxes of single games, as they take too much space, but these two are among my all-time favorites. I spent many hours playing them against the computer, and a few hours against friends. I still cannot beat the computer on the higher skill levels, though. 😖

A lot of these were really cheap. I mostly went for games that I like that weren't on Steam/GOG (at least, weren't on there when I bought them. A lot of them have appeared since.) and aren't obscenely expensive. Also, I didn't even know Mobil 1 Rally Championship came out in the US until I saw the copy I have now on eBay.

And yes, I do love golf games every bit as much as this image suggests.

(wega still need to be moved out !)

even if they're old....those old dos games are still the best!!! 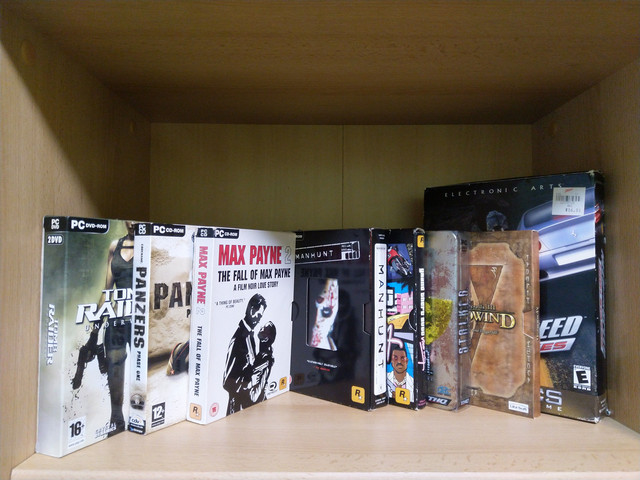 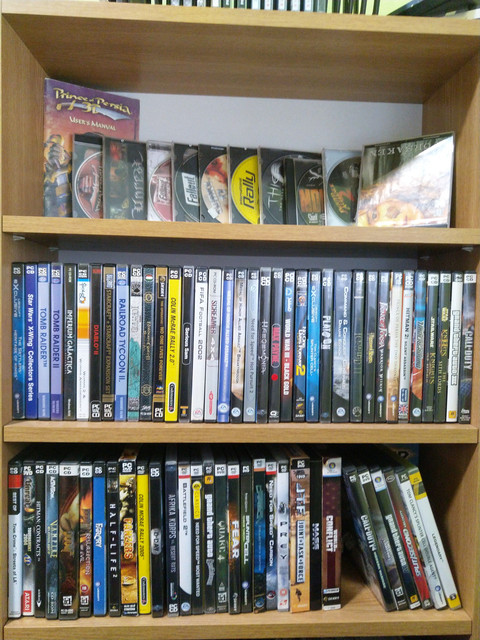 Second image, top shelf, only Prince of Persia 3D and Unreal are not magazine bundles. And I have both Fallout 1 and 2, it's a two disc jewel case. I have 50 more magazine bundle games.

Two recent acquisitions. Ultimate Strategy Archives is pretty weird in that it includes the Windows version of HOMM on the disc full of DOS games, and despite being a US release, X-Com actually installs the European UFO: Enemy Unknown. Also, games with manual lookup copy protection are still protected, but the answers are thankfully in the manual.