Not to mention the actual money needed to acquire each separate.

Yep, a crystal based sound card costs about $30 on fleabay, and with the release of ARGUS PCBs the Gravis clone is about $40...

As the main ARGUS-person I strongly endorse this card, it's very obvious that it's a product of passion. It's made by 3 persons which had large, positive influence on the ARGUS project - they know what they're doing.
If you have a cheaper way of achieving the same result -> good for you. Doesn't make this card any worse, nor does it save you an ISA slot.

This card sounds like the most amazing piece of new-old tech I've seen in a long time.

There is one person in the world making new Nixie Tubes. There are people making new Gravis Ultrasound and MIDI cards. We can attach a solid-state storage device to a 30-year-old PC with a variety of new hardware.

We live in a world with artisanal electronic components, and I love it.

I'd pay in advance for this card if it helps production.

As for the first one, I'll get one of these as soon as it is officially released.

I agree. It's a wonderful time to re-live the past.
Spent 10 hours straight fighting EMS memory and DesqView on a 286 last night. Back when I was a teenager I would probably have gone ballistic from all the trouble, now it was just 10 hours or zoning out and enjoying the research process. With beer close at hand, module files playing, it was as good as any vacation :D

I noticed you asked the same question only a few hours ago. I think keropi mentioned that he's not ready to release it quite yet. Hopefully soon though!

We're all patiently waiting for him to make an announcement.

looks like many projects appeared recently, this one is beyond mind blowing! 🤯 kudos to the devs! 👍

just stumbled over this right now, sounds like an awesome device, finally the one card to rule eh solve them all. Looking forward to listen to the sound when it arrives at my place some day 😀
keep up the awesome work!

Satisfied Orpheus I owner signing in here.
Out of all my dos cards/modules only GUS is missing. With current ebay prices I'd rather shell out same 200+ EUR for replica with modern audio grade analog output.
Also last but not least I think engineers like keropi truly deserve our AAA+ level incentives for this kind of effort!

As for CMS function, please share information about using MUS-1099 or SAAYM CMS card along with Orpheus I or II if there any. It seems many games require 220h for CMS and it is the same address of SB part of Orpheus I or II. I wonder if it is possible both card can share 220h.

I want to present you the Orpheus II LT 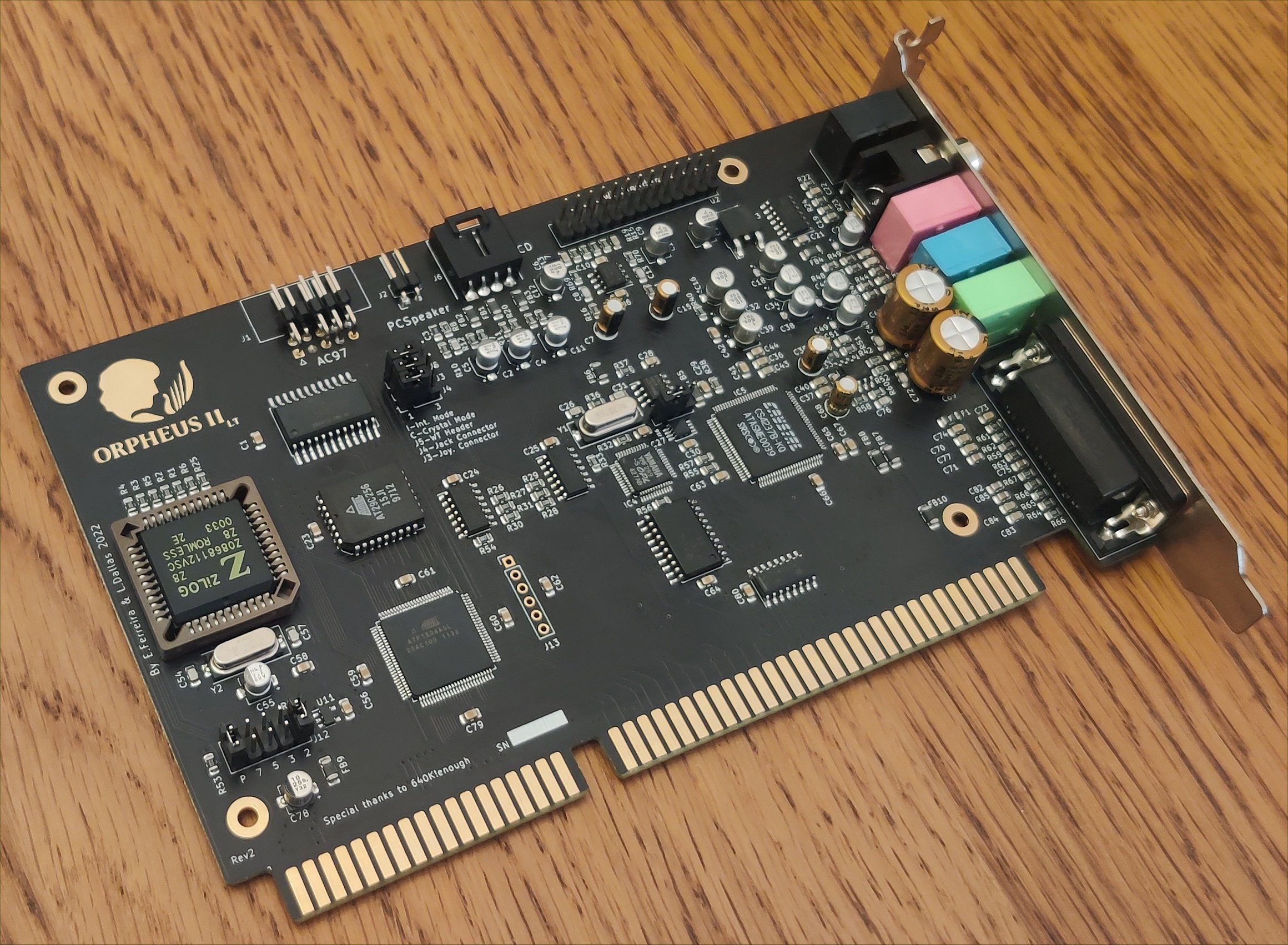 note: on this "early bird" version there is a jumper next to CS-4237: as-is it will work just like the original Orpheus meaning that under windows we are still locked to Crystal-FM
but once the new version of ORPHINIT and firmware get released, you can flash the card with the new fw and move the jumper to the other position -> it will allow OPL3 to be selectable under windows just like the full orpheus shown in previous posts

In order to help fund production costs we have made 12pcs of these "black edition" LT boards , after these the next ones will be classic green color
if anyone wants one of these just head over to http://pcmidi.eu/orpheus2LT.html and grab one while stock lasts 😀

Wow, so busy I cannot reach the site ("Backend server unavailable" according to BitNinja)..oh man!

Would love a black LT, and a "full fat" with the Interwave later on..

Awesome to see this 😀

I just put in my pre-order. Can't wait to see full version come out.

What a beautiful card!
congratulations!

no modifications on the line-in levels as they are implemented according to the Crystal recommendations
but if you are really interested you can modify this by swapping some passives, if you can do that I will tell you which

Does the LT have Gravis Ultrasound support? Or is that what the Interwave chip does?

I'm a little tight on money right now, so I'm skipping this generation of Orpheus, but these are beautiful cards and I appreciate all the effort that has gone into them. I'm super satisfied with my Orpheus I. It's probably the coolest computer part I've bought in the last 20 years.