Should be fine if it's got a socketed CPU... I don't think ASRock did it, but ECS did... there were some mATX KT133 boards around with soldered in Morgan Durons 1.1, 1.2, 1.3 and then a couple of years later, same again with applebreds 1.4, 1.6 and 1.8 with I think KN266. Then there was maybe even a third go round with semprons, but unsure if they were socket A or socket 754. They are probably great if you want a win98 system cheap and don't wanna mess with it. But if you're tryna buy something that takes a variety of CPUs you want to avoid them of course. So kind of a PSA, confirm CPU is socketed when buying mATX "Socket A" combos.

More ewaste pickups
Yeah, another Voodoo Rush. This one looks like it'll work too. There's some unpopulated areas for ram. Makes me wonder if I could add some and get an 8mb card. I'd be interested to see if more ram could redeem it's bad reputation.

A really old WDC i/o card and a memory module for an apple iie.

I actually have an apple iie mobo squirreled away, but I was immediately lost when I realized it won't take ISA cards. I guess it's not as simple to get working as an IBM compat. Maybe if I start collecting apple iie parts, i may be able to get it to work down the road. Or maybe I'm asking too much from luck.

Local thrift shop had a dual PCIe LGA775 board , Gigabyte GA-P35-DS4. It was a steal at just $25. I will be installing a Core 2 Extreme X6800 and a brace of 7800GTX for a representative period correct "Crysis PC". Also picked up a GF2, PCI SATA I card, a couple of vintage Microsoft mice in good condition and an IBM/Lenovo 40Y8686 external USB DVD drive, which I am hoping will be Win98SE compatible. Interestingly, they had entire boxes of some old vid cards such as the FireMV2200 (probably next to useless for DOS gaming) and probably 50 PNY 8400GS 1GB PCIe cards. I am wondering if those would be useful for DOS gaming on later hardware such as P4 and Athlon 64...

Just got an offer to buy a lot of vintage hardware for $110. Includes a Sun Ultra 60, Dell Poweredge 2950 and a tub full of late '90s/early '00s video cards, ram and other expansion cards plus 3 vintage SCSI drives (those are hard to find and I just got a free Iomega SCSI card). All I did was respond to a CL ad yesterday for a pair of 1905FP monitors and ask the seller if he had "any old junk from the '90s". He said he thought he threw all that stuff away but texted me back today to say he found a bunch of stuff in his shed. The Ultra 60 is worth $500 by itself. And, while I already have like 40 vintage video cards, I could really use a few dozen more because I want to do some exhaustive benchmark testing of video cards from 1995-2005 or so.
I had already decided I was going to call him to ask him to dinner. When two lonely, gay computer nerds meet, it is like fireworks. I was gonna wait 48 hours for the sake of propriety. But at least now I know he likes me too 😀

That WD card is a interesting find.

This is MFM or RLL for hard drive, with floppy controller, serial and parallel all on one card. Good catch.

Yeah, it was big and old so I took it. It just felt good in the hand.
I was actually looking for a period correct controller card for my 386 build. I unfortunately don't have an MFM or RLL drive. I only assumed the ewaste place wouldn't let me walk away with any storage devices due to privacy concerns.

Received a Radeon X1950 Pro AGP card for my Windows 2000/early XP system, should be more than enough horsepower to run any game through the first half of the 2000 decade at highest quality. 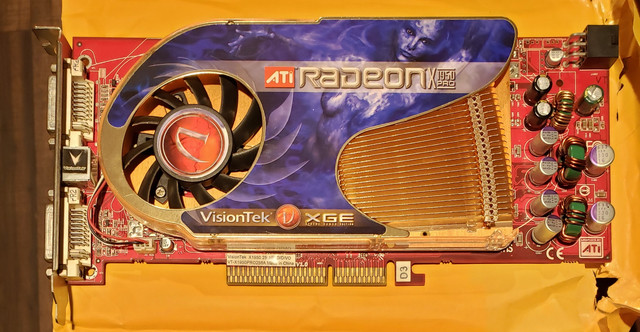 Also stumbled across this gem for sale locally, the legendary Logitech Z5500 5.1 speaker system complete and in great condition, asking price far less than I've seen them sell for on ebay, so I jumped on it. Not that I need another PC speaker system, but this set seems to be held in very high regard. The sub is a lot bigger than I expected! 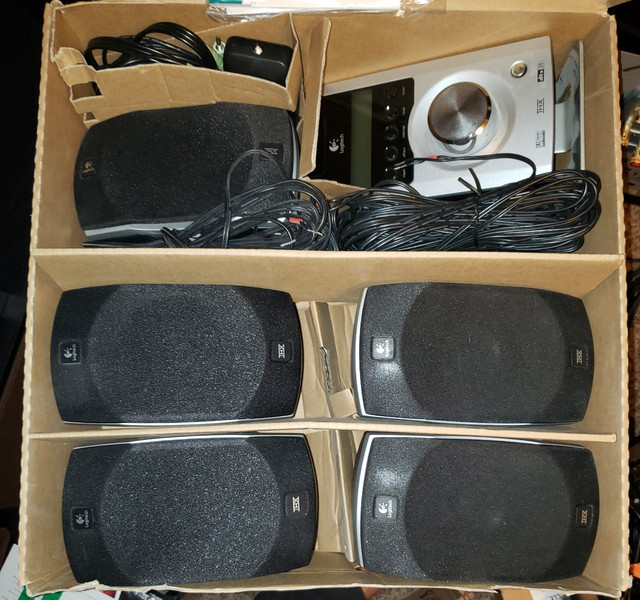 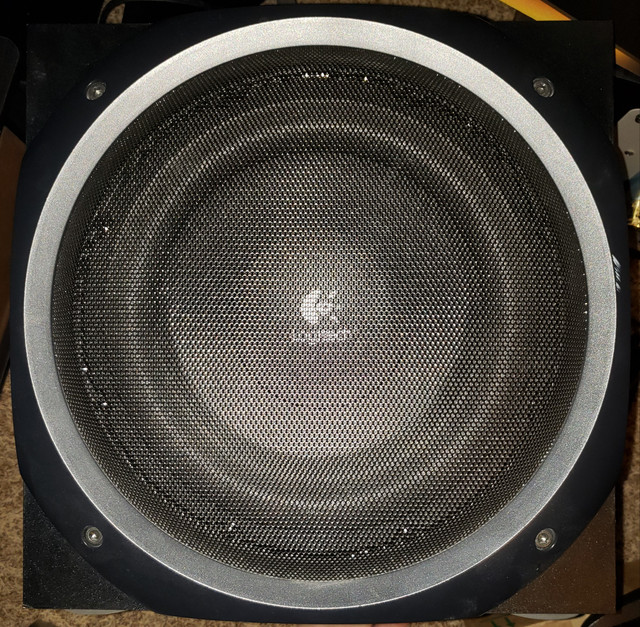 I recently tried a Sapphire Radeon 3650 DDR2 - AGP, the only issue was that Catalyst drivers wouldn't install. Tried all versions for 32 bit OS and no go with XP and 7SP1.
I used SDI driver installer and it worked. Saying this to save you some time if you'll have the same problem.
Steam wouldn't work even with workarounds, I had to install old games from CD/DVD to test. 3Dmark works but I had issues getting a score because of some errors.

One of these days I should try to figure out why my X1950PRO AGP died and manage to revive it..

I recently tried a Sapphire Radeon 3650 DDR2 - AGP, the only issue was that Catalyst drivers wouldn't install. Tried all versions for 32 bit OS and no go with XP and 7SP1.
I used SDI driver installer and it worked. Saying this to save you some time if you'll have the same problem.
Steam wouldn't work even with workarounds, I had to install old games from CD/DVD to test. 3Dmark works but I had issues getting a score because of some errors.

Thanks for the info. The video card is the last piece I needed for that PC, so now I need to install XP and see how it goes. Hoping it won't be an issue. It's a KT266A motherboard and AMD Tbird 1.4 GHz system which I know works well in XP. Worst case scenario I also have a GeForce 6200 I could throw in there.

Just picked up this neat board. This photo is the seller's.

I use an APC Predator I Plus as my main 386/486 board right now and it gives excellent performance. That board has a Symphony Haydn II chipset, and a similar layout with two VLB slots at the bottom of the board. The jumpering is simple, and the board seems really robust and very fast. It's easily the most stable and complete 486 board I've used, and it's the most interesting hybrid board I've used. Unfortunately, the 386 side of things does not like 486DLCs very much, and I've had issues with cache coherency that I am still working out. Everything seems stable now--except SpeedSys.

This board, however, intrigued me for two reasons: (i) it's another APC board, so why not trust it there; (ii) the chipset.

I have NEVER seen this chipset before. Has anyone heard of it or seen it before?

I referenced the almighty mR_Slug's Chipset Database and found some neat things out about this chipset:

That last bullet point, right there, sold me on the weirdness of this chipset. I have read that VLB 2.0 is marginally different to the extent that the contrasting factors pertain to burst reads and writes, but apparently VLB 2.0 is 64-bit and also supports 50MHz officially within the spec. While I realize that a 486 probably can't take advantage of the former, and the latter is mostly off the table, it's still intriguing to me. (I guess I'm a VLB nut 🤣) I don't know if this means that this board contains an actual VLB 2.0 implementation but, to my knowledge, other than integrated devices sitting on the VLB bus, there are no VLB 2.0 compliant cards.

I wanted to share the datasheet for this chipset, but it only fit on my Google Drive. Here's a link, if you want to check it out. I've done the Adobe text recognition conversion, for your convenience.
When the board comes, I'll probably make a proper thread.

I have one of these in storage, only used for a few months. Capacitors may have burst by this point, it's been unused for basically the last fourteen years now. A shame. I should probably sell, but I won't.

More importantly, I used to sell them back in the day, and I know their power. That's a good buy 😀

Local thrift store has a whole pile of x1950s for $5 each. But that speaker system has me green with envy.

Just picked up this neat board. This photo is the seller's.

these boards were sold for industrial use and are extremely high quality, the company is also known as Corvalent and is still in business

A 486 based Platform, Designed to Offer the Versatility of Over 21 Complete Industrial Grade Motherboards In One Simple Type: Baby-AT

The Predator 747™ is a 486 based platform, designed to offer the versatility of over 21 complete industrial grade motherboards in one. With a quick change of the CPU and simple jumper setup, the Predator 747 can be configured to accomodate any of the following microprocessors: Intel® 486SX, DX, DX/2/4; AMD™ DX/2/4, 5x86. The Predator 747 features on-board built-in I/O controller including: two serial ports, one parallel port, dual floppy controller, two EIDE interfaces and one PS/2 keyboard and mouse header. It also offers expandability of seven 16-bit ISA and two local bus mastering VESA slots. Its standard configuration incorporates: 128KB of secondary cache memory allowing up to 256KB, and AMI WinBIOS plug & play with an option for Flash BIOS.

here's a later board they made, an AT 440BX socket 370 used in Pelco camera control systems

I don't find a single match on google images: "ESS ES1869f FM" so I guess I will have some hard time to make that FM chip work.

Bought a ton of stuff today, a real mixed bag for $110. Highlights are...
Sun Ultra 60 Dual 450MHz 64 bit RISC workstation
Dell Poweredge 2950 2x4 core NetBust Xeon (haven't checked SKU), set up for 6x3.5" SAS (RAID-6)
Matrox G2+ 8MB AGP
Diamond Stealth 3D 2MB PCI
Creative CT4500 AWE64 ISA
EPoX socket 462 Mb. AGP
Dual Opteron 280 Mb. PCIX
ATI Radeon R6 DDR SG32M AGP 32MB (Rage 6)
ATI Radeon 9250 AGP 64MB (Rage 7)
ATI All-In-Wonder 2006 Edition AGP 256MB (Rage 8 )
There were a couple more sound cards, several more video cards, numerous Ultra ATA controller cards, SCSI cards (including PCIX), some SCSI and SAS drives, two large fistfulls of RAM from 30 pin EDO to DDR3 ECC, lots of CPU coolers, miscellaneous cables and adapters.
I am going to use the 2950 as a RAID-6 NAS as soon as I can get half a dozen 2TB SAS drives. It will mainly handle music (original art) so it doesn't have to be huge, just redundant. The Ultra 60 will help me learn about RISC architecture and coding for Linux and FreeBSD. As for the rest of it, I am collecting video cards from 1995-2000 because I want to do benchmark and compatibility testing and start a database. I also had to add a bunch of stuff to my wishlist to go with stuff I just got, you know how it goes, 🤣. I have an 8400GS PCI but I really need a GT520 PCI to go with that dual Opteron motherboard, drives for my NAS, something to put in that Socket 462, etc.

In the unicorns an leprechauns section:

Got the Ultra+ version as well, comparing the specs