I got these four Plextor PX-760A PATA drives today. One needed a lens cleaning. All work fine and are flashed to the latest RPC1 firmware now. This and the SATA version PX-760SA are the last drives made by Plextor. (The successors were made by various OEMs like Pioneer.)

I have a 760A too and I was looking for the firmware upgrade (if any) and plextor software to go with it, can you point me in the right direction for them? I installed plextor tools on my windows xp machine but they refused to work, can't remember the version though.

Finally picked up a motherboard I’ve been curious about for some time: the Alaris Leopard VX/Tornado LX. Apparently, this board has a matching CPU/interposer setup that allows it to run an IBM BL3. Fascinating.

I have an Alaris Cougar, so that’s not a bother, but I’d be interested to find one of those some day and see how the performance compares between the two, as the SiS471 is objectively a much more performant chipset than the OPTi499, at least when it comes to memory-intensive benchmarks.

I guess I have a thing for Alaris boards, as I also have a Leopard LX and Leopard. Both are fun pieces to mess with and the 486SLC2 is an interesting chip as well. I’d love to find one of these someday. It’s like the Cougar’s little sibling, with an SLC2 instead of the BL3. I find it almost humorous to have a 386SX-based chip and a full-fat 486 on the same board!

Anyway, attached here is a picture from the seller. It’s on its way, so I’ll update with a proper thread once it arrives and I can test it out. I really need to get caught up on a backlog of things to test and document, but haven’t been in the best condition to do so as of late, but I digress…

The Leopard VX is pretty fascinating. It’s a typical Alaris part—well made, but oddly implemented. The Efar EC802GL chipset, identified by mr_Slug, seems to be a clone of the SiS471, so that’s pretty nice. What’s most interesting, though, is the combination of the SiS471 with an OPTi 82C822 VL-to-PCI bridge chip. Granted, while these OPTi chips are not known for the greatest PCI performance, my hope is that the PCI implementation does not detract from the VLB performance. It’s also equipped with an MR-BIOS, but thankfully that BIOS is already in the collection stored here on Vogons.

I’ll be sure to test this one and report back. I may make a short video about it or something too, just because.

Also, I recently snagged an ABIT KT7A non-RAID, Athlon XP 1700+, and a DataExpert EXP3406 hybrid 386/486 board. The EXP3406 has an OPTi495XLC chipset instead of the usual 495SLC. I’d be interested to see how this compares to my OPTi495SX hybrid board. So far, the fastest hybrid board I’ve used is my APC Predator I Plus, which has the Symphony Haydn II chipset. Unfortunately, the APC board dislikes Cyrix DLCs and TI SXLs and, while it works with these parts, it’s temperamental when it comes to the L1 cache setup and I can’t get it stable enough to run SpeedSys. Everything else seems to work okay (Norton SI, Landmark, &c.). But that’s a project for another day.

The KT7A is probably going to replace my CUV4X PIII setup for now, as I’ve been curious about Athlon XPs and cheap Tualatins have all but dried up…

EDIT: Turns out this is a Tornado 2. And it needs some TLC. Time to do some repairs and find some jumper manuals...

Between bouts of mental health (not mine) related family issues I finally got the shelving put in for my vintage stuff. Before that that stuff was all precariously stacked on top of each other. Much nicer now.

Between bouts of mental health (not mine) related family issues I finally got the shelving put in for my vintage stuff. Before that that stuff was all precariously stacked on top of each other. Much nicer now.

Shelving makes such a difference. I used to have all my systems stacked and hooked up but I only ever used one at a time (if I was using them at all, usually on the weekends or something). You can imagine to cable mess that would have made. When I moved house I decided to go for a shelving solution as well but decided to put all my systems on the bottom for easy "slide out". All I have to do now is to grab one and hook it up and when done, simply slide back.

I see you have a massive CRT, I guess you want to keep that one as close to the floor as possible due to its weight.

Yes, that Magnavox TV and the other monitors on/toward the bottom is one of the main reasons for getting the shelving in the first place, because prior to that I had to stack the monitors on top of there in a Tetris-like fashion, and then had a TUB of wires and crap sitting on top. The computers had to sit in the actual "lab" next to my halfstack amp.

Now all that can live on the shelf and I can get to it much easier. Sure I have to move the server to get to the Tv, but I don't swap that as often. Most of the time I use a Mitsubishi TV that has a line out that I can capture game footage off of. I usually switch my machines out seasonally Spring = 286, Summer = Tandy, Fall = Compaq, Winter= 486), but that's all messed up since I just got the Compaq Deskpro (which is right off camera to the right), and I'm enjoying playing around with that for the time being.

EBay sellers get serious discounts on shipping. I recently sold a complete tower which weighed I think about 25 pounds, and figured it would be crazy shipping. When I purchased the label, after discount it was only about $30 to ship. I was mind boggled, but the discount was about 50%.

The last Voodoo 2 cards I bought, there was a seller on ebay with 4 total, 2 matched STB and 2 matched Diamond. I made a deal with him on all 4, I think it was maybe $340 shipped for all of them. This was years ago. Sure glad I sprung for those now, 🤣. I don't remember what I paid for my 5500, must have been between $100-$200. I haven't even tested the thing yet, but it was sold as working. I do need to get around to testing the pile of stuff I've accumulated.

I wish I'd bought a Voodoo 5 years ago. At this point I'll probably have to trade for one. I can't afford these prices.

That was years before I started collecting.

I have a small cache of interesting bits that I've bought up over the years for the purpose of trading. I suspect that at some point this will become an alternative currency between collectors if prices continue to trend upwards.

That was years before I started collecting.

I have a small cache of interesting bits that I've bought up over the years for the purpose of trading. I suspect that at some point this will become an alternative currency between collectors if prices continue to trend upwards.

https://coinmarketcap.com/currencies/retromoon/ Something like that? How about a coin that generates faster on older systems?

* this post is satire, please don't take it seriously*

If I had a time machine I would go back and buy bitcoin. Because then I would be a millionaire and could easily buy anything else I wanted at any price. Like a GPU in 2021 and 2022. 😀

If I had a time machine I would go back and buy bitcoin. Because then I would be a millionaire and could easily buy anything else I wanted at any price. 😀

Gotta feel for the people who mined 10's of thousands of BTC back in the early days and either lost the wallets or spent it on stupid stuff like 10k BTC for a pizza.

I thought my friend was pretty dumb when he put about $10,000 into bitcoin a couple of years ago. I mean, it's a just a fad, right? I've been saying this since it came out and it's just not funny anymore.

Just look at the very first page of THIS particular topic..... those V5s were rrrreally popular back then ! 😆
I think they were around $50 then on ebay, which I found very expensive, in particular since I had to add intl shipping as well.
Bought one locally for €30 though.

Bought a Compaq Aero PCMCIA external floppy drive for the Compaq N600C, Compaq Multiport WiFi card, CF to PCMCIA card, 2x128mb PC133 CL2 and 800Mhz P3 cpu for it, Still waiting on the new battery for it from China.

I want the port replicator for it but I'm still not even sure which one is compatible for it which makes it difficult to search for it. 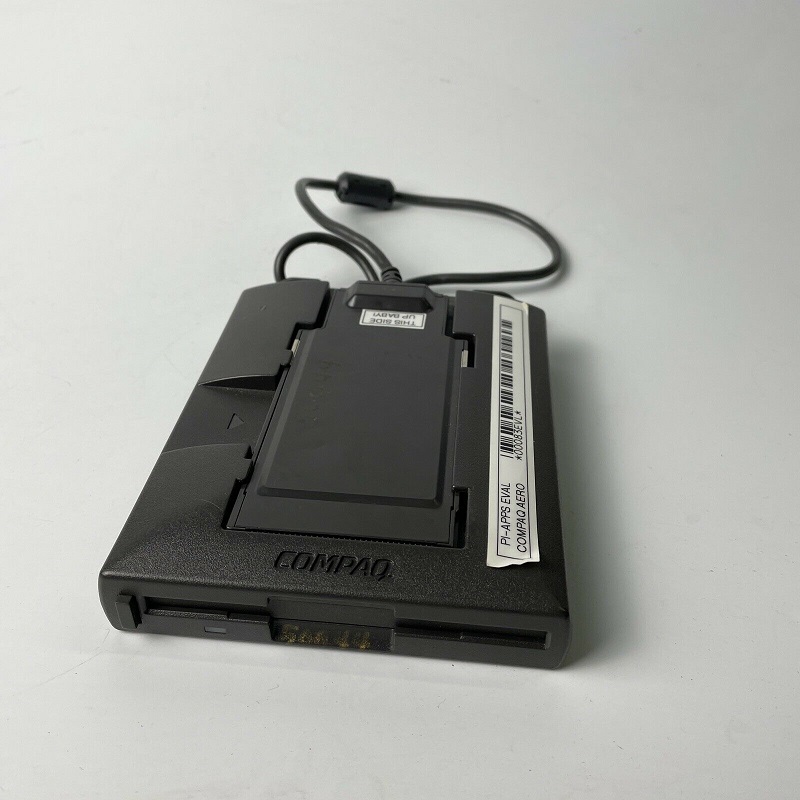 This little laptop should make for a nice DOS/Win98se machine since it has a ESS based sound system that works in DOS.

Finally got diagnostics running on the N600C and well it has a Pentium 3 Mobile Tualatin 1000-S 512 in it soooo ..perhaps it might be better to leave it as is.

Seller photos.. should be arriving shortly.

Grabbed this from a guy for 40 dollars. No keyboard or mouse, no HDD and he replaced the 5.25 inch drive with a CD-ROM drive.

I bought a 5.25 inch floppy drive for 5 bucks to swap out the cd rom .
I found an IBM mouse that is the same model this one came with which im picking up tonight along with an IBM keyboard.
This is the Mouse.