So I've been wanting to revisit Thief Gold recently, but I want to have the original gameplay experience, so I installed the original version instead of NewDark . So far the game itself runs fine, but the cutscene videos won't play! Everywhere else I've looked it's been pretty much just suggesting using NewDark/TFix instead.

I've tried installing lgvid.ax with the registry but that doesn't seem to help. Running the game as administrator just crashes the game, same with setting compatibility mode to Windows XP or 9x. I've also tried installing some recommended codecs, but still no dice. Does anyone know how I can get the cutscenes working on modern Windows?

The problem with trying to run the original unmodified game on modern Windows is you really can't (well you can but there will be issues). There is a reason TFIX was made and also a reason that Newdark was created.
With that said NewDark isn't necessary but TFIX is unless you want to jump through unecessary hoops.
TFIX has the (OldDark Legacy Engine) option in the installer to install the original executables so you'd don't have to use NewDark. I verified this last weekend when I tested TFIX v1.27 on Windows 2000. It also includes the fix for palletized textures as well. Just check that and uncheck everything else and you're good.

I do have a note in my Thief folder that if movies crash to rename ir50_32.dll in the Thief directory. I'm guessing maybe when I had that issue perhaps it was trying to use an old version so it used the newer Indeo version I had installed instead.

So I've been wanting to revisit Thief Gold recently, but I want to have the original gameplay experience, so I installed the original version instead of NewDark .

That was one of the reasons why I decided to build a retro PC.

I dislike game mods (in general, not just for Thief) because they usually don't separate critical bug fixes (i.e. stuff needed to make the game run on modern systems) from unnecessary gameplay alterations.

P.S.
Nothing against people who enjoy heavily modded games, to each their own. I just prefer having my old games look and feel the same way I remember them from back in the day.

I've been using DDFIX 1.5 with the OldDark engine and aside from the cutscenes not working it runs fine. As far as I can tell, all of TFix's additions and fixes only apply to NewDark anyway, so it has no benefit for OldDark.

Doing some further testing, the issue seems to be that the videos try to work when I run the game as administrator but end up crashing it. So it seems to be a matter of something being wrong with LGVID.AX, because renaming the file and running the game as admin again doesn't cause any crashes. I also tested the unpatched version of Thief 2 and it does the same thing.

I mean I can't really blame them because they only had leaked Thief 2 source code to work with, so it was bound to have issues. I just wish someone would make a patch for LGVID.AX, since that seems to be the main culprit for these cutscene issues.

I use DxWnd + dgVoodoo2 now. Although I used TFix once upon a time, the videos stopped working once (which was again a Windows update), I reverted to DxWnd and dgVoodoo2, and never came back. The 1024x768 resolution and the legacu GPU features along with video support kept me there (and same for Thief II as well).

Does anyone know how I can get the cutscenes working on modern Windows?

What works for me with vanilla game: there are two files in this archive. Running the install.bat install a .sdb shim. Then go to the Thief folder and edit cam.cfg and remove the line "skip_intro" and save it as a Read-only file. The .dxw file has to be imported using DxWnd and the game has to be run from DxWnd UI itself. Good luck!

I am not sure of registering the lgvid.ax and Indeo codecs, I don't remember doing that (maybe I did it in another game).

Edit: I remember this also failed on my Win7 VM until I installed K-Lite Codec pack, the game used the LAV decoder.

I installed everything as you instructed, but when I launch it just gives me a black screen. If I skip_intro, it'll take me to the main menu but once I select "Start Training " or "Skip Training", it just locks up. Is there any settings I should be changing for the LAV decoder or anything like that?

I tried deleting DivX like suggested, but that doesn't seem to help either, sadly 🙁

I installed everything as you instructed, but when I launch it just gives me a black screen. If I skip_intro, it'll take me to the main menu but once I select "Start Training " or "Skip Training", it just locks up. Is there any settings I should be changing for the LAV decoder or anything like that?

What happend on Win7 was, the game would lock up during the intro part. The .sdb file that I provided brought it back (EmulateDirectDrawSync tweak) along with another DxWnd tweak (Supress FOURCC blit capability in DirectX(2) tab, enable Expert mode from the Options menu in Menu bar).

skip_intro gets added automatically to cam.cfg, I don't know why, that's why I put it in read-only. When I had to change a game resolution or any setting, I would remove read only setting, change the setting in game, go to cam.cfg again and check if skip_intro exists and remove it, and set read only again.

Now you haven't told if the initial Eidos Interactive intro played, but what you can do is to set the game to DxWnd windowed mode (this gives more control over the game), right click the game entry in Dxwnd, click Modify and enable Run in window and try the game.

Moreover I just installed K-Lite codec pack, I didn't install the LAV decoder separately neither did I try ffdshow nor did I change anu LAV setting.

I should try these on TFix as well but I can't check that now.

Edit: You should check if the sdb installed properly, there should be a Thief Video Fix or something like that in Control Panel, the black screen in my PC is caused when the sdb wasn't installed/when executable wasn't thief.exe

I verified that the .sdb file was installed and it does show up in the programs list as well as insuring that "Supress FOURCC blit capability" was enabled in DxWnd. Running in a window just gives the same result, just in a window this time.

Maybe it only works on Win7?

I am testing on Windows 11 as well and gtx 1050ti. That keeps the GPU out of the way of problem (hopefully).Let me see what happens if I disable the ActiveMovie supported codecs, maybe that'll help

@OpenRift I tested deleting K-Lite Codec Pack on Windows 11 and the game stopped working as soon as I did that. Thus the game is dependant on K-Lite Codec Pack for something, maybe the Indeo codec (that you probably registered using regsvr32) doesn't work well on Win11. So can you try installing K-Lite Codec Mega Pack? I am quite sure that'll put things in place. 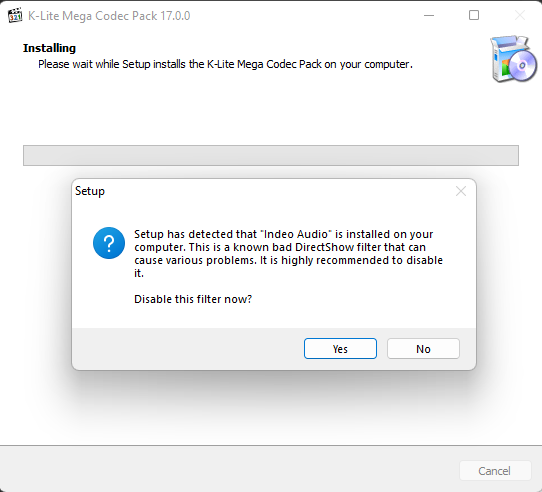 Now I think we are quite sure what the problem is, which is fixed by some version of LAV filter. I didn't try the separate LAV filter, but you may try that first as well but please note here that if the LAV filter isn't loaded in the taskbar hidden icon section during the video playback section, the installation of LAV wasn't complete.