Finally entered into the Voodoo V 5500 club... The card appear to be very well preserved, if it was in very poor condition, it was going to be waste... Now my collection is completed for me (as i like to say, a collection is not complete if there is no AWE 64 Gold, Voodoo V 5500, Pentium Pro....), or close to, as i will like GUS card, ATi Rage Fury MaXX, Terratec EWS64 and others.....

MSI was right tho, this is really an link to the future>>>>

I have the perfect system for that Voodoo V...
https://imgur.com/a/uEOwmkG

Traded these parts for the Voodoo V, also included Acer Extensa Pentium 1 laptop not in best condition, but working, COM mouse M$, some sticks of EDO SIMM memory, AMD K6-II 300, 2 sticks 256MB SDram.
The mains in the trade was SB AWE64 Gold, SB 16 CT1750, TSeng ET4000 PCI, ASSrock 754 bridge card (brand new).
The card costed me like 25 euro tops, as the parts from the trade costed me that much..

What was that 754 bridge meant for?

What AMD board had a less than 754 socket?

I knew they made 939 and AM2 boards to upgrade the 754 and 939 boards... I actually have one of the AM2 bridge boards and a motherboard to use it with.

Was looking at Apple computers for some reason and came across a 7300/200 that included an OrangePC board for way less than the OrangePC boards go for by themselves.

The video on the Apple has issues but hopefully that can be fixed. At the very least, I can either replace the motherboard or scrap the Apple and get a working PCI based Apple to use the OrangePC board in.

Will also need to get the pinout for the breakout cable for that OrangePC.

What was that 754 bridge meant for?

What AMD board had a less than 754 socket?

I knew they made 939 and AM2 boards to upgrade the 754 and 939 boards... I actually have one of the AM2 bridge boards and a motherboard to use it with.

Well it is for ASSrock 462 K7 based boards to be able to upgrade to socket 754. They was called ASRock K7 Upgrade models.
Well the socket 462 (known by most as Socket A) was before the socket 754.
They did have before the 754 and 939 had 462 boards.. Is interesting i never liked ASSrock, but i really like the transformers idea of these upgrade bridge cards they are interesting. Mine was the first i ever found here locally, but prefer to trade it with the rest things for Voodoo V, no matter socket 462 is really important for me, as i have about all high end boards such as ABIT NF7-S V2, MSI K7N2 Delta 2 Platinum, Albatron KX18D Pro II, GIGABYTE GA-7N400 Pro, SOLTEK-SL 75FRN2-RL - Golden Flame, EPoX 8RDA3+, Chaintech Zenith CT7NJS, DFI Ultra Infinity (sadly the DFI LanParty i dont have), ASUS A7NBX-E Deluxe, MSI K7N2 Delta 2 ILSR, ASUS A7M266-D Rev. 1.04..

This is a seller who knows his stuff.

And you'll waste time on top of that, trying to explain that "no, they're not the same thing" in order to get refunded. 🙁

I was about to come and post "Actually he apologies and said he'll send the right one" but he's sent another Trio 64V+ but not the one pictures in the advert - I wanted the removeable RAM chips! Oh well...

On these, they were basically giant shell, bottom is vast space for one or two large boards and almost 4 feet of ribbon cable to hook up the floppy drives. That's rather bad design.
Make sure you have a shunt block plugged into the finger contact at front to get the image on the little bitty CRT.

Had to make a new floppy cable assembly to fix the connections issue. The floppy's edge connectors are not gold so you need de-oxit fluid to maintain these weak electrical connections.

Ok. I didn't know ASRock made a 462 board that could take an upgrade board.

Found on listed on eBay for an insane price.

I did look for the 754 bridge card upgrade, on ebay, but could not find any.. Everything is priced dumb high in ebay is last place for me to look for parts, but guess since ebay+pay pal take up to 15% fee is normal stuff to be even more expensive there sadly, but on the positive side you cant get scamed easy, while in the local site i buy stuff cheap that is true, but some times the sellers are scumbags that sell dead things as working ones....

Sure it did took me a while to collect interesting stuff but i did find the eventually... And i have good amount of nice things that i have them multiple of them, once i sell them i will prob have enough to buy whatever i like to..

I finally found a Thinkpad A30p. Was looking for one for many years.
It seems to have an expired CCFL (or a broken inverter at least), but that's probably an easy fix.

Can't wait to have it arrive here. 😀
Now if I only had recovery disks or ISOs...maybe an A31p one will work. 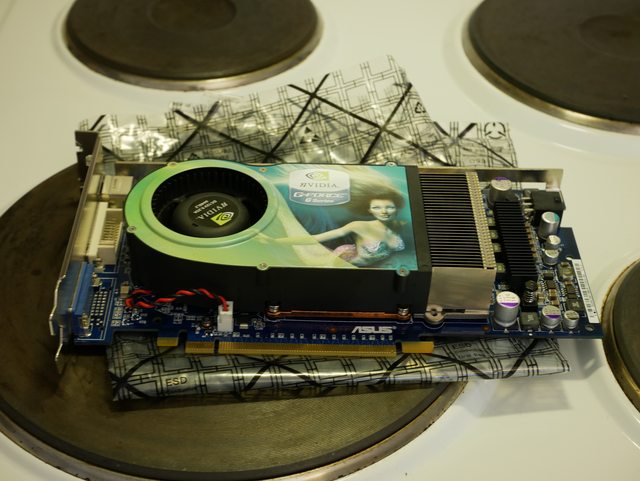 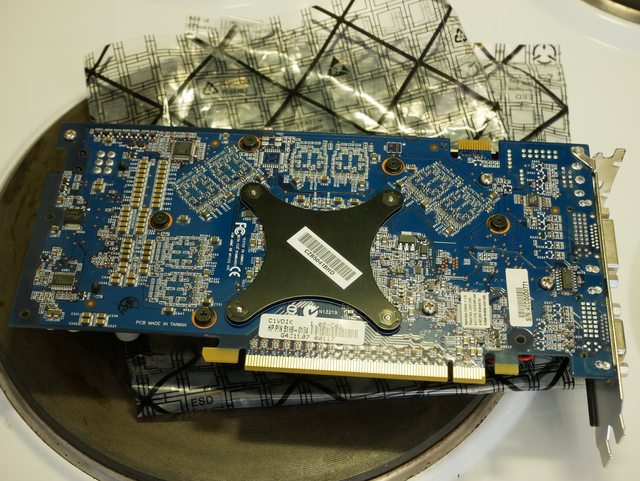 Card is "as new", tho pretty sure the previous owner cleaned the card.
But the screen connectors and PCIe edge looks like new, barely any scratch marks.
6800 Ultra design and cooler, tho 6-pin connector compared to the 4-pin the ultras use.
I think its an OEM card, but why would they pay extra to get a beefier cooler? =)
Also it has 1 VGA and 1 DVI, compared to the "normal" cards that have 2x DVI.

That's a nice find. You should install it and run NVIDIA's Mermaid Demo, since that's where the girl is from. I doubt they would release something like this today.

Nice card, but seems someone removed the ASUS cooler, and added reference one 🤣, scrap find ?!?! The stove backround is interesting 🤣, ready for frying lmao .

That's a nice find. You should install it and run NVIDIA's Mermaid Demo, since that's where the girl is from. I doubt they would release something like this today.

The only thing NOvideo will release these days will be GEforce RTX-GTX-TNT-Ultra-Super-TI Kidney edition (PREorders starts soon, if someone sell 2 kidneys they are getting "free"SLI bridge Kidney edition Super-TI) .....

Nice card, but seems someone removed the ASUS cooler, and added reference one 🤣, scrap find ?!?! The stove backround is interesting 🤣, ready for frying lmao .

Well you may be right.
But i can't find any pictures of a similar PCB, regardless of cooler.
6 pin power and VGA connector.
And it's definitely a 6800GT, got the print on the GPU and GPUz agrees.
Also if the cooler was swapped the slot-bracket should be wrong, but its clearly meant for 2 slot cooler.

Well it's been the month from hell here with real life stuff, but I got out of the house yesterday to an electronics flea market, AND a surplus store and among the goodies was a small box crammed with RAM which is what is in the pic. Looks like 7 4MB 30 pin, 4 1MB 30 pin, 3 1MB SIPP, 2 8MB 72pin EDO, 4 32MB SDRAM, 2 16MB SDRAM, 1 128MB SDRAM, 1 512MB DDR400, 2 256MB DDR hiding in shame behind it because I already have a shoebox full. Then the 2 in the packages were a separate deal, 2GB DDR3s. Not super sure I'm right on all those, that was on a "looks like" pass without too much looking up. Seriously though 7 modules, 3 modules, what savage had these and didn't get at least pairs or re-unite them 🤣

More modern stuff grabbed was 3 120GB SSD, HD7750, J1900 ITX board, RPi 2B, and some dev boards that might be emulators or peripheral adaptors in future.

Also got a pair of USB sound cards... which for some unknown reason I was on the lookout for... now I've actually paid a few hundred cents for them, I'm like "Doofus, they are gonna work on XP minimum probably, and what laptop or system built after 1997 doesn't have a built in, or a better way to add sound? Or maybe you were expecting a unicorn P133 laptop that has actually functional USB but no audio??? " Sooo, yeahhhhh.

So RAM, here it be.. I guess though having 3 odd 4MBs isn't bad, since I can stick 2 in an AWE32 or goldfinch and have 1 left over for projects. I have a faint recollection of having a 286 board somewhere that will want that SIPP, but not sure if it's extant within the bounds of my current domain, or escaped at some point.

After two years of not going to flea markets and the like, I went ahead and did today. And found only two gamepads to be worth buying:

An original PS2 controller, which surprisingly is in great condition, albeit dirty. I don't even have a PS2 since 2016, but I do have a USB adapter to use it on PC. That, and nostalgia is one hell of a drug. It surprisingly makes for a very good Win98 gamepad, if you don't need vibration.

A PC/PS3 gamepad branded Trust GXT 540. It was 'working', as the guy said, but not at all, really. Whatever, it's not like I can't figure out the problem. And I did. The cable had somehow got cut internally, as revealed by my multimeter not beeping. Soldering another USB cable fixed it right up. Also works on Win98, but no vibration again. It does also work as an XBOX 360 controller with a switch on the back, making it very versatile, on par with my F710 (also bought there dirt cheap back in 2017), except the latter is much more well-built. Only real problem is, it has that horrible rubberized texture that turns to goo. Yikes.

Both of these cost me 4 euros in total

Snagged a pair of 8 core AMD Opteron 6128s for 10 bucks, G34 boards look to be cheap and I wonder just how far these CPUs can be pushed, they aint exactly retro but I figure 10 years is pretty ancient in PC years.

Also grabbed a Golden Sample FX5200 Ultra since the seller couldn't get rid of it and he didn't want a lot for it, I really like the Gainward GS cards and have a few others in my GPU collection, really love the Red theme they went with.

I've run my Linux file server on a dual socket G34 for years and it's been great. It's not a fast CPU compared to what's available now, but the RAM is very cheap. It's still a good platform if you want a lot of memory and don't need as much raw horsepower.

I've run my Linux file server on a dual socket G34 for years and it's been great. It's not a fast CPU compared to what's available now, but the RAM is very cheap. It's still a good platform if you want a lot of memory and don't need as much raw horsepower.

With the cost of electricity today I'm reverting to a Rolodex.
😀

quite a good result for 4 euros in the end then, nice fix on the gamepad too - always satisfying to return an item to working condition