Despite having funded pretty much my entire computer hobby ~20 years ago with dredging through discarded stuff, fixing it up and selling what worked, mainly then-current motherboards, I don't think I ever encountered one of those in the wild. I was a "daredevil hotflasher", although usually the plain old bootblock recovery worked without needing to resort to that. Still, my fat lazy old self now is very grateful for his TL866.

Got this today, original Live drive for my 1998 PC which will be rocking the original Live sound card. I also have the CT4660 daughterboard for it so the sound package is complete! 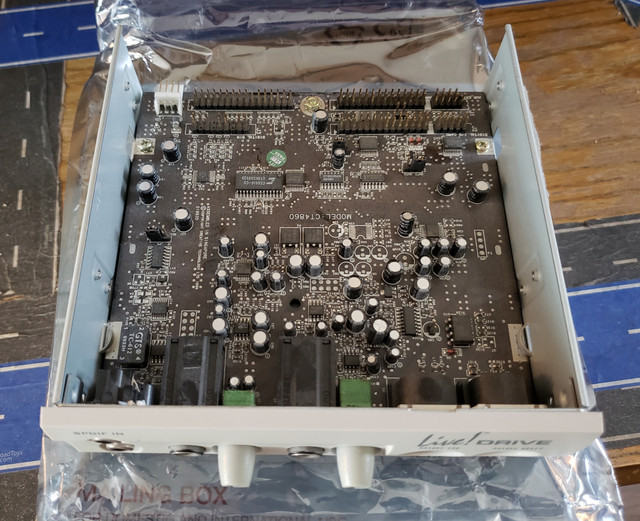 The more I get into these 7th Day Adventist Cult TV Station PCs the more I am sort of glad the 3 bland ass Vectras from the listing had been misplaced and all this shit found. This stuff is FAR more interesting than 3 bland ass P90 Vectra VE5s. So far I have a 233MHZ P-MMX Dell GN1 that is restored and working, and I've got a further 3 systems to investigate aside from this one (plus a Prolinia Server I didn't even want but was coerced into taking.... I figure I can strip it for parts). Namely a Compaq Pentium Tower, a Dell Optiplex GX1 Pentium III Desktop, and what appears to be a PowerMac G4 MDD Dual 1.25. Its heavy as shit and has rack mounting hardware mounted to its chassis so I assume its maxed out in terms of HDD and RAM as well.

Well this is a first for me: a custom built NLX form factor system. I thought NLX was exclusively an OEM form factor, I've never seen it in any other context and every NLX form factor part I've had has been OEM branded.

Specifically this thing is rocking a 333MHZ Celeron atop a KU440EX. Apparently the motherboard has Rage IIC graphics and Crystal CX4235 ISA SB-Pro compatible sound integrated. Has a high speed serial card installed and a fairly beefy for 1999 64MB of RAM and a 4.1GB HDD. BIOs has been updated to a 1999 version at some point in time (as all this hardware is Aug 98 aka Celeron launch). Such a weird combo, armed to the teeth in every way except processor in which regard it has one of the cheapest options available.

Case is pretty brittle, was trying to get around whatever weird locking tab the case had and it just broke instead of releasing. No other damage though so all is well. I'm going to replace the CMOS battery, put a 20GB HDD in it (anything less than 10GB is going to be extremely unreliable in my experience. Seems like HDD reliability made a leap and a bound around that time) and maybe even throw a DVD drive and PCI sound card in it. My records indicate there is a TNT2 M64 PCI around here somewhere which would be about right for this system, might see if I can find it. I have an NOS Pentium II out in my garage that I might look into installing, but honestly I feel like leaving it as a Celeron is the correct call.

I'm going to load Win98FE onto it and go from there. With that sound card I don't see the point in getting it setup for Real Mode DOS, and PCI graphics at max limits its 3D capabilities quite seriously. I'm also going through a bunch of floppies from the giant box of floppies and this is a great machine for that as its in the compatibility/usability sweet spot.

is there any significant reason to run 98FE over 98SE ?

IIRC 98FE was depricated due to it having far more issues than MS wanted to try fixing in a service pack. 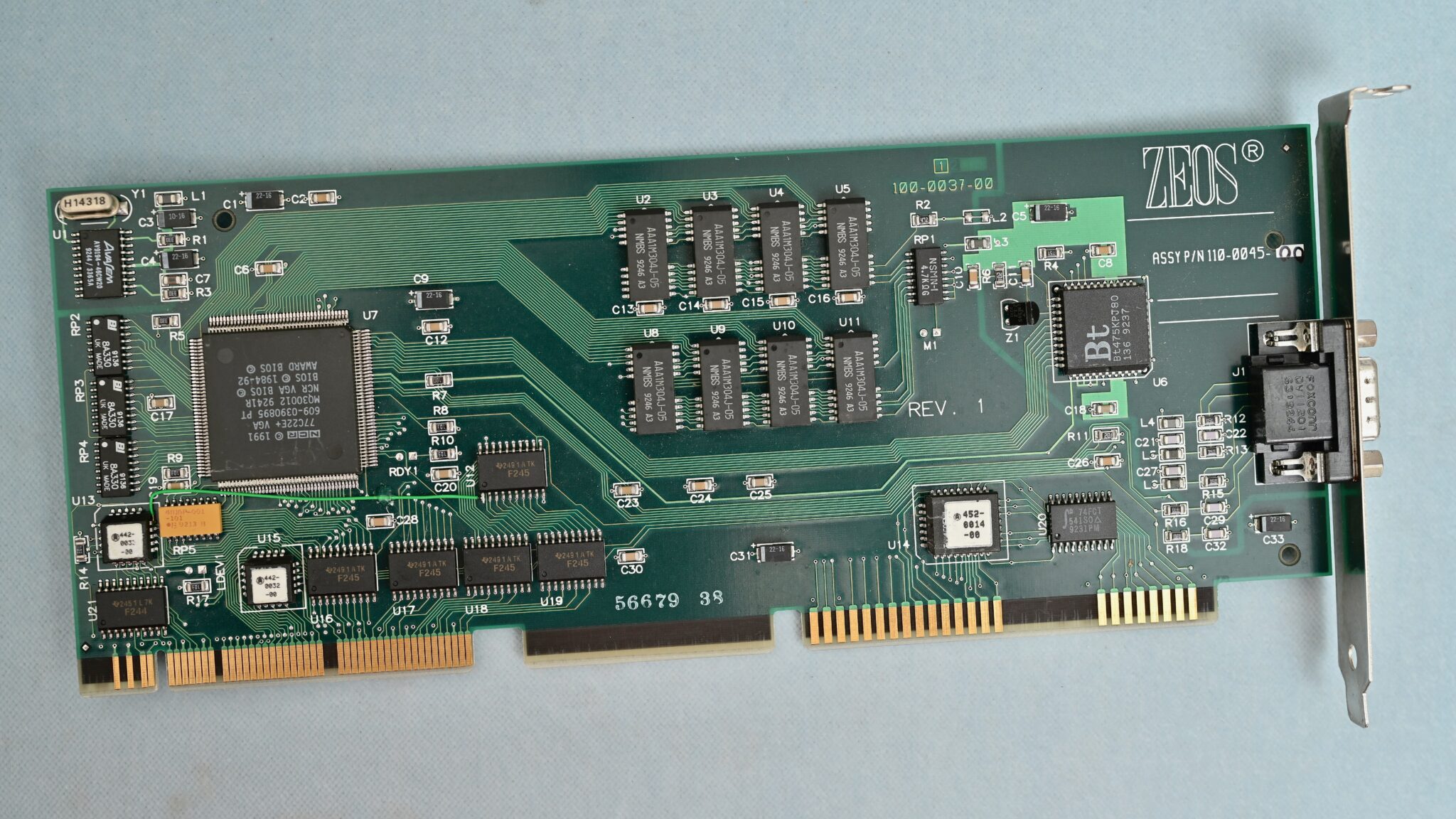 I've only seen this one on a ISA card before.

10GB wouldn't be very bad, as long as you use rubber jacketed Xbox drives mostly. While small in capacity, these were the fastest drives I ever used, besides a 20GB Hitachi Deskstar that sounds like an angle grinder (yet it's fully functional) because that's how IBM/Hitachi had created them factory.
As for 8GB, WD Protege drives from some older OG Xboxes also work and are fairly speedy. I have one laying around whenever I need to flash a BIOS, and it never felt slow.

For the Celeron... you probably might get away with a slotketed Mendocino, I guess. If the BIOS supports anything else than Covington, Klamath and early Deschutes, that is.

She's quite a beauty.

The ISA 77C22E non-plus is quite fast, matching the Tseng ET4000AX. I'd be curious to see how the VLB + variant compares.

When one is not enough. 😁

The performance of the WDs is top notch. They are probably single platter and short stroked. Look at that HD Tune graph. Plus 70MB/s for about 75% of the graph. These will fly on a retro system. Tested on a i815EP + Celeron 1000A 1333. 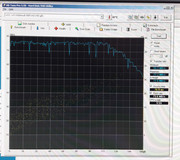 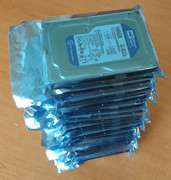 Y'know what they say - the more, the merrier!

I had never seen EDO RAM SIMMs in their original cases, let alone new ones at that. Not even when these things were new back in the 90's. I didn't even knew they came in pretty packages 😆 Pretty impressive!

The ISA 77C22E non-plus is quite fast, matching the Tseng ET4000AX. I'd be curious to see how the VLB + variant compares.

Not so bad in DOS actually. Not so much in Windows/CAD. I believe the newer NCR77C32BLT is much better.

I am in process of redoing my VLB benchmark on a new base system, new benchmarks and with at least 2 dozens of aditional VLB cards, so this is WIP.

so much VLB goodness on this page 😁

Nice VGA i/o combo there... I bet everyone with a 2 slot instead of 3 slot board wants that, so they too can have the experience of staring at an empty slot and wondering what the hell to do with it. Nah but there's some single slot boards around, usually they have onboard i/o though. Guess it also saves ISA slots if you've got a big load out of other cards.

is there any significant reason to run 98FE over 98SE ?

IIRC 98FE was depricated due to it having far more issues than MS wanted to try fixing in a service pack.

Originality. SE wasn't out when this system was manufactured.

I like to make my machines somewhat period correct at least. Like I don't mind putting a 1999 mid range PCI video card (which I WAS able to locate, with some difficulty. Thanks prior point in time me for having the good idea to note locations things were stored in my spreadsheet) in a mid 1998 machine because its very plausible someone upgraded their video card. Most people weren't going to update from 98FE to 98SE right away.

Anywho the case is EXTREMELY brittle, and the mounting rails for the CD drive were made of the same plastic so that was fun because they were of the squeeze to release type. The ends broke off so I had to drive a slot cover down between the rail and the case on each side. I'm determined to keep this rare little machine going, so I might look into designing and 3D printing replacements. Shouldn't be too hard. The 4.1GB Hard Drive is of course dead and I haven't been able to figure out how to remove the caddy quite yet. This case is an absolute nightmare, no wonder NLX was a dud as a form factor. The floppy drive also appears to be dead as it keeps signaling that its the wrong type of drive even though I've verified this is a 1.44MB drive and the BIOs is set as such.

I did figure out what hardware I'm going to put in it though, I've decided to go with the TNT2 M64 PCI and an Turtle Beach Montego (A Vortex based card) along with a 20GB HDD because again these sub 10GB drives never actually work (or if they do, they don't for very long). I pulled the high speed serial card out. I may or may not replace the floppy drive, depends on if this machine has direct CD booting ability or not. I've sadly ran out of time to work on it tonight.

Man I forgot how frustrating fun working on vintage computers can be. This is the most active I've been on VOGONs in a long time. Its also made me realize the computer hardware I have is probably worth well over 100 grand now and has destroyed any doubts I may have had about the sanity of hoarding so much computer hardware. There is no way I would get into this hobby today as a new comer.

It's too bad that that shared ISA slot is unpopulated.

Not a huge issue as I likely won’t run any ISA cards on a dual 1.4s system.

If you do consider running an ISA card, it's an easy fix.

See: Re: What retro activity did you get up to today?

I use that system with tripple boot DOS, WIN98, WINXP.

you are going to be soooooo organised from now on! 😀