Finally Finished my " End of official Windows 98 support PC" This has to be my longest running project!

The PC is built round a GeForce 6800 Ultra I got in 2012 when I found out it was the last card officially support in Win98. As Win98 doesn't support multicore CPU's I figured that made a P4 without hyper threading the last "official" CPU. (From Intel)
With the goal posts set I was able to make a start. I lost interest in computers round this era so had to research everything beforehand. In the end I ended up with,

Motherboard: Asus P4P 800-E Rev 1.02
Got this in 2012, Everything I read both old and new recommended Asus P4C800 with the 875 chipset or P4P800 with the lesser 865 chipset. In reality there was little difference between chipsets, and no practical difference between the half dozen P4P800 variants, availability and cost meant I got the P4P800-E

CPU Heatsink: Scythe Mugen 2 Rev B
None of my existing heatsinks were upto cooling a Prescott. In the end I got one of these NIB off Amazon for £44 towards the end of 2014. Not one of my better deals but NIB is rare for me.

Video: GeForce 6800 Ultra 256MB AGP
The original 2012 card was sold as untested, yeh it was dead. I didn't know about the solder issues back then so thought "It'll be fine" I was wrong.
2015 I finally got a confirmed working card for under £35, which I think is reasonable, some of these cards end up selling for crazy figures.

Audio: Audigy 2 ZS with internal I/O bay (Live drive)
Cant remember when I got this as I have now have 3 cards, and the I/O bay has been used with all 3 systems.

Case: Corsair Obsidian 650D
Got 2 of these in 2015, 2 different sellers same week, One for my daily driver had obviously been used and this one that was still in original packaging including the protective cover over the window and had no dust whatsoever. In fact the only thing showed it was second hand was Corsair and NVidia badges had been stuck discreetly on the top right on the left side cover (So near the window) Wouldn't have thought to put them there myself but they looked good and match the build so stayed.

PSU: Corsair RM750I
Originally I got an previous model Corsair 750 second hand but ended up in another PC.
Last year (2017) I needed a new PSU for another project and these were on special direct from Corsair so I ordered 2.
In the end this was a mistake as the software doesn't run in anything below Windows 7. I'll swap them round if I ever get a Win7 PC.

Fans:
2x 140MM 1x 120MM Aerocool DS Dead Silence Red LED
1x 200MM CoolerMaster MegaFlow RED LED
Red was always going to be the theme for my hot as hell P4.
I had used and liked Blue Aircool DS fans before so stuck with them, the 2 140mm up top, the 120 rear exhaust
Not many people make 200mm fans and even less with Red LED so my choice was made for me, still its nice and quiet.
These were the last bits of hardware ordered in mid 2017, until then I used the original case fans that I hadn't already stolen.

FDD: Standard Gotek
Ordered 2016 same time as I needed for my P3.

All drives I had lying around

DVD:
Some SATA DVD-RW I had lying around.

I've now got Windows installed and stable FINALLY, still need to install games, etc so that'll have to wait till next post Its time for some crappy pics
(My camera doesn't like poor lighting, which I need to truly show this off) 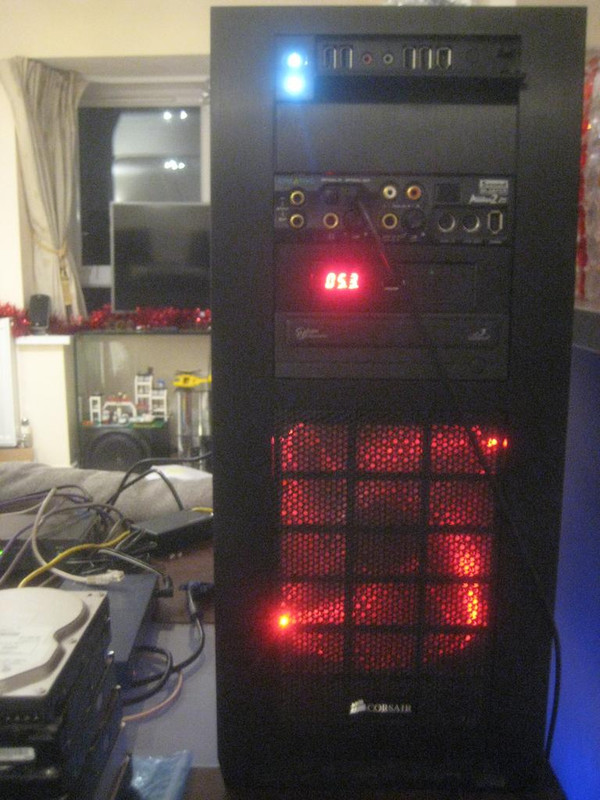 Back, The cables are for the front USB 2.0 ports, I hooked them up not that I really use them 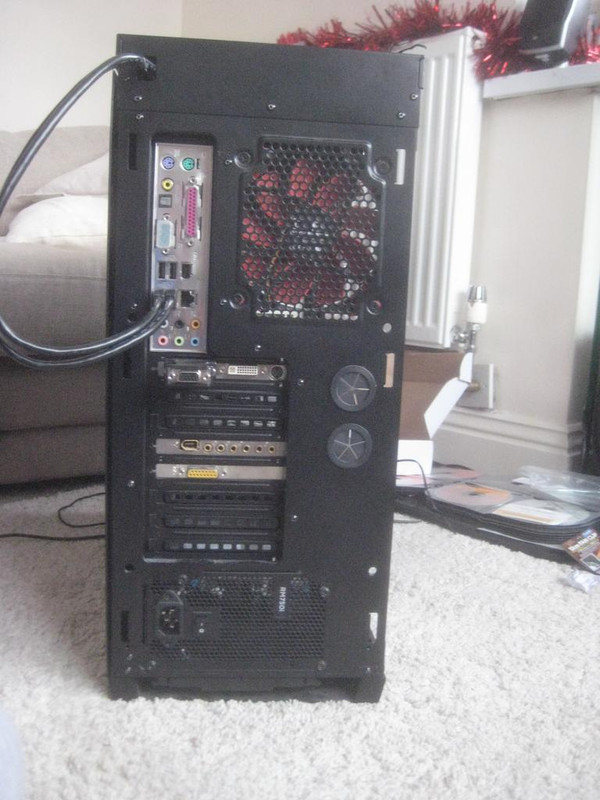 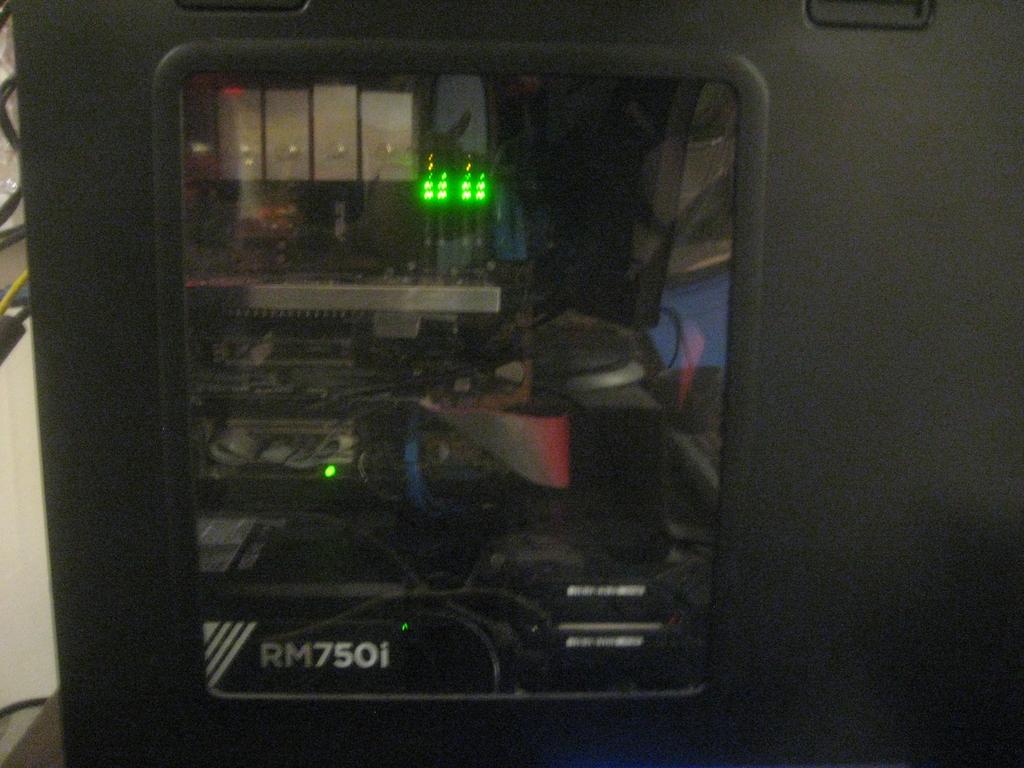 Better look of the inside, I mounted the HDD's like this as the "proper" way was blocking all airflow from the front fan, catch is they are just held in by gravity. 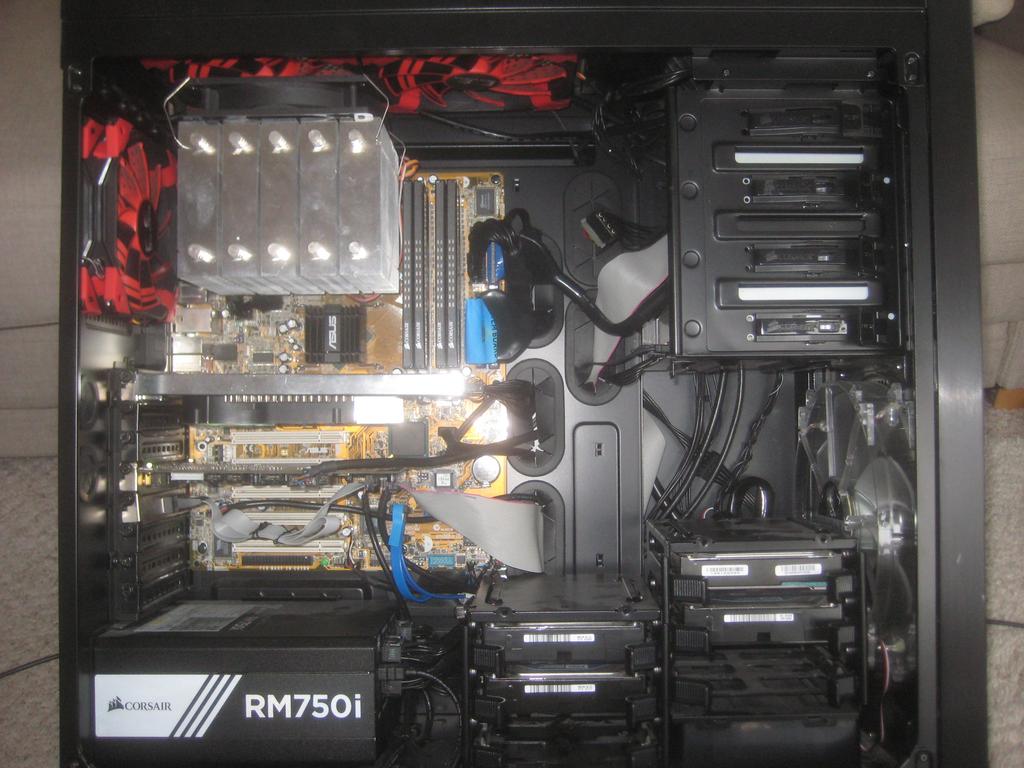 Poor attempt of trying to get the lighting 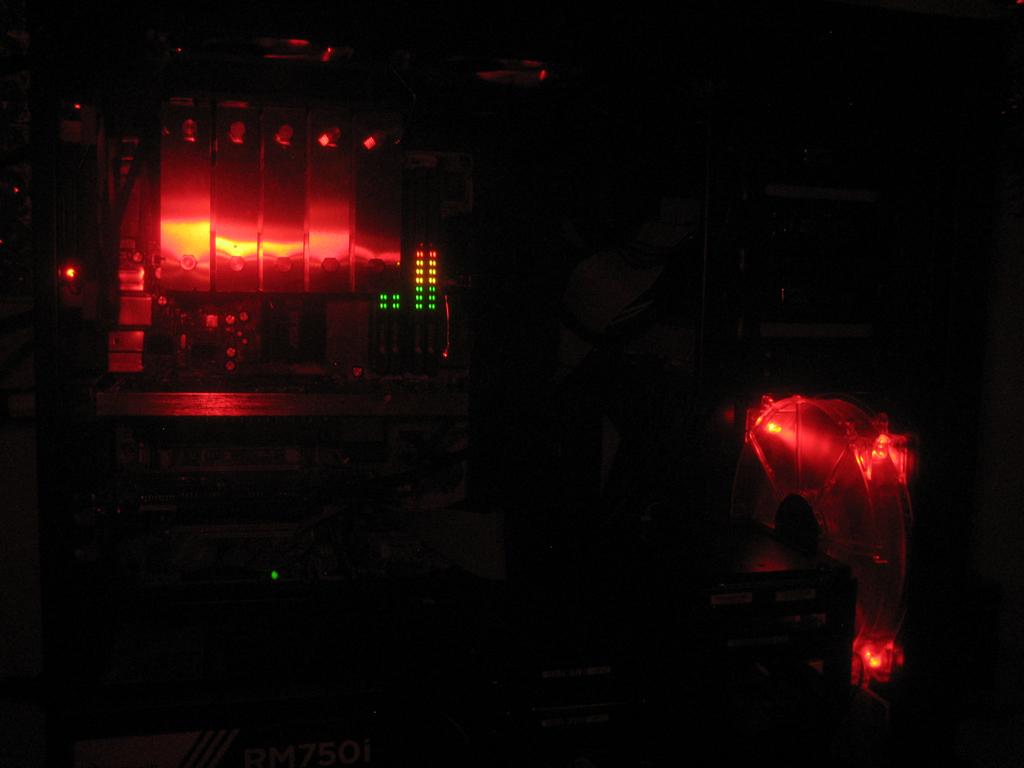 Even worse photo but showing off more of the flashy RAM, It really is quite fun to watch the utilisation go up and down 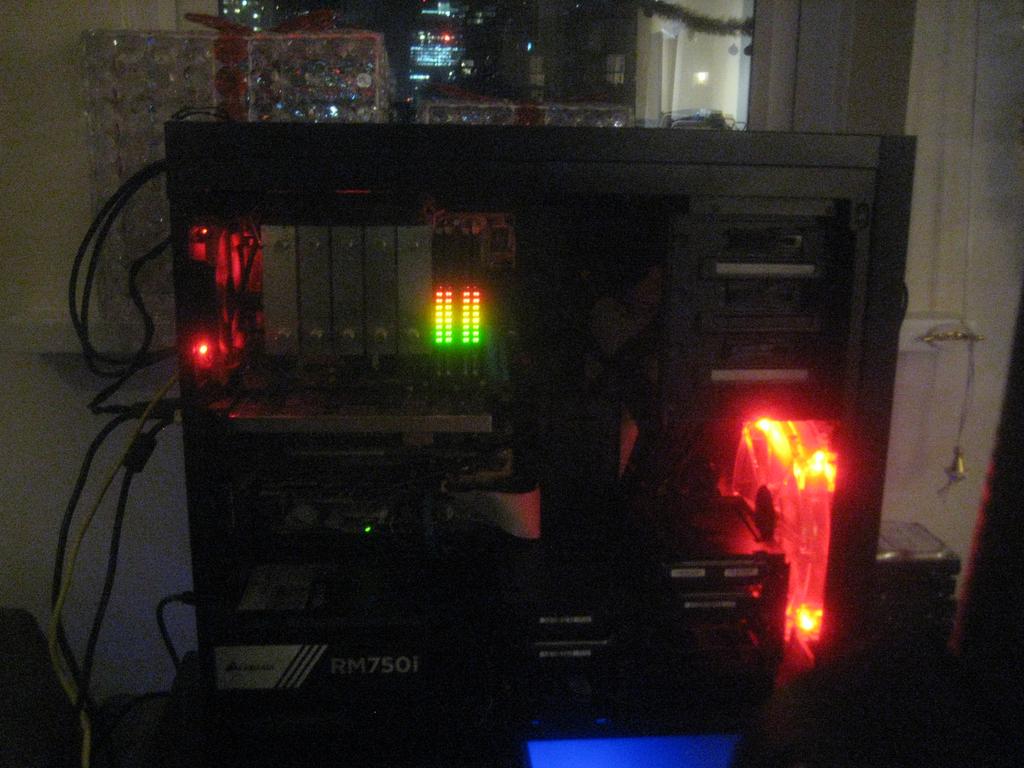 Next chapter, the pain of getting to actually work!

Nice build. The P4P800-E is one of the nicest Socket 478 boards in terms of features and expandability.

750W seems quite an overkill for this system, but since you got them on sale, there's no reason not to use them.

Why do you need all those old IDE drives? I would at least lose the 60Gig one, so that I can put each device (HDD+DVD) on an individual channel, without using the Promise controller.

BTW, do tell in your next post how you connected all the drives and configured the BIOS to get Win98 to recognize all of them. 😀

So the "fun" of trying to install windows.

This was my first SATA motherboard when I got it so know very little about it accept from installing WinXP on work computers, and even that required drivers on a floppy!
So I planned to use IDE for Win98 and then maybe use drivers to support the SATA disks in WinXP, in theory this should work as I' wouldn't be booting off the SATA drives. I didn't know how well setting BIOS to compatibility mode worked with Win98 seeing the SATA drives no problem.
At the moment I have it using Primary IDE & SATA channels (or P-ATA+S-ATA in the menu) but will probably get rid of the IDE drives all together next rebuild.

The HDD setup been surprising easy, the rest wasn't! I had read up and tried all the work around for limiting RAM in Win98 but I could not get it stable.
Installing the sound card drivers would blue screen windows, and majority of graphic card drivers wouldn’t detect the card at all, plus the system was slow and unusable even before trying to install much. I also didn’t know was graphics cards with lots of vram also had problems.

In the end I gave up and tried the rlowe patch, everything worked after that, sound card stopped crashing the system, I could use any graphics driver I wanted and it installed fine, have had (Almost) no blue screens since so paid the $20 for the full version.

I justified it with the fact $20 is less than a night out and I’m spent more than 1 night in playing with this. I guessed I’d probably use it on another computer and last month I needed it for my 2 Compaq D510’s so it’s down to $7 per PC.

I then came up with another crazy idea. Keep the 4 HDD’s in compatible mode for Win98 and I can use WinXP’s native raid support for NTFS stuff!

So the 2 320GB drives are in a stripe array (Gotek floppy has the drivers needed during initial XP setup, I didn't bother slipstreaming them)
But here is the other thing I’ve learnt. The Win98 RAID drivers work really well, so now Windows 98 also has access to a Fat32 partition on the raid

I'm not sure if I would bother with the RAID next time and I definitely wouldn't trust Win98 to boot off it.
The added risk of if 1 HDD fails then the other is effectively useless doesn't bother me, you just have to remember its a single disk. That's how the PC sees it, and that's how you have to see it as well. If it actually was just 1 physical disk and it failed your in the same boat anyway. (Lost everything)

What is a bit of a worry is all my disks are from PC’s decommissioned from work, so have few years of use on them already. but on the other hand I get a smile seeing that raid configured screen on startup and only personal data I'd loose is a few savegames. everything else is just software I've installed.
I'm really on the fence about this, oh-well, I don’t know, problem for another day.

I actually got distracted since the last post playing GTA San Andres for the first time, runs well with Antialising and Antrope on 2x and is probably one of the latest/most demanding games that'll get installed.
I am getting graphical issues in C&C Generals where the terrain doesn't show correctly which I haven't looked into yet.

Overall I like this system, I do love the flashy ram, but I'm honest I think I've out grown this build already.
I started planning this when I first got back into old hardware and overly nostalgic for Win98, The OS I used at home from 1998 thought to 2006, the last true Win9x with non crippled dos support. and this PC was supposed to honor that.

Thing is, ever since I started using Win2k in 2016 for my Win9x gamming, I've fallen out of love for Win98 and try to use it as little as possible.
If I want to play a game that NEEDS Win98 most likely its an older one that works fine on my P3 that I have more nostalgic feelings towards.
Need for Speed games are another but I'd want a system with a 3dFX card for those games.
And anything that runs in WinXP I can run on my Socket 775 WinXP box.
So really I've just spent a few years building something I don't need!

It's good to know that SATA Compatibility mode works with no issues installing Win9x. Installing XP (and I think even 2K) on this chipset also works with no problem, even with the SATA drives at "Enhanced". No drivers on floppy are needed. 😀

It's good to know that SATA Compatibility mode works with no issues installing Win9x. Installing XP (and I think even 2K) on this chipset also works with no problem, even with the SATA drives at "Enhanced". No drivers on floppy are needed. 😀

also known as rambling!
2K supports the "enhanced" mode!? that's quite cool!, I was in 1/2 a mind to install 2k instead of XP, another thing to try out next time

I know right! I cant stop watching it, different programs do seem to utilise it differently, left bank/right bank or bottom to top.
and yes you do, the lego was a Christmas present 😊

Nice to see a Prescott build, how are the temps?

Nice to see a Prescott build, how are the temps?

Good question, couldn't remember so had to test again!

Left it about an hour in idle and got....

I did fire up a couple of other PC's during the load test so the increase in ambient temp isn't just down to the P4, but even by itself its able to make the living room in our flat notably warmer