I have recently acquired this board and took some pictures of the test bench I have arranged with it, I know there are some supporters and experts of 486 EISA Systems on this forum, so I hope to receive suggestions and comments about it. 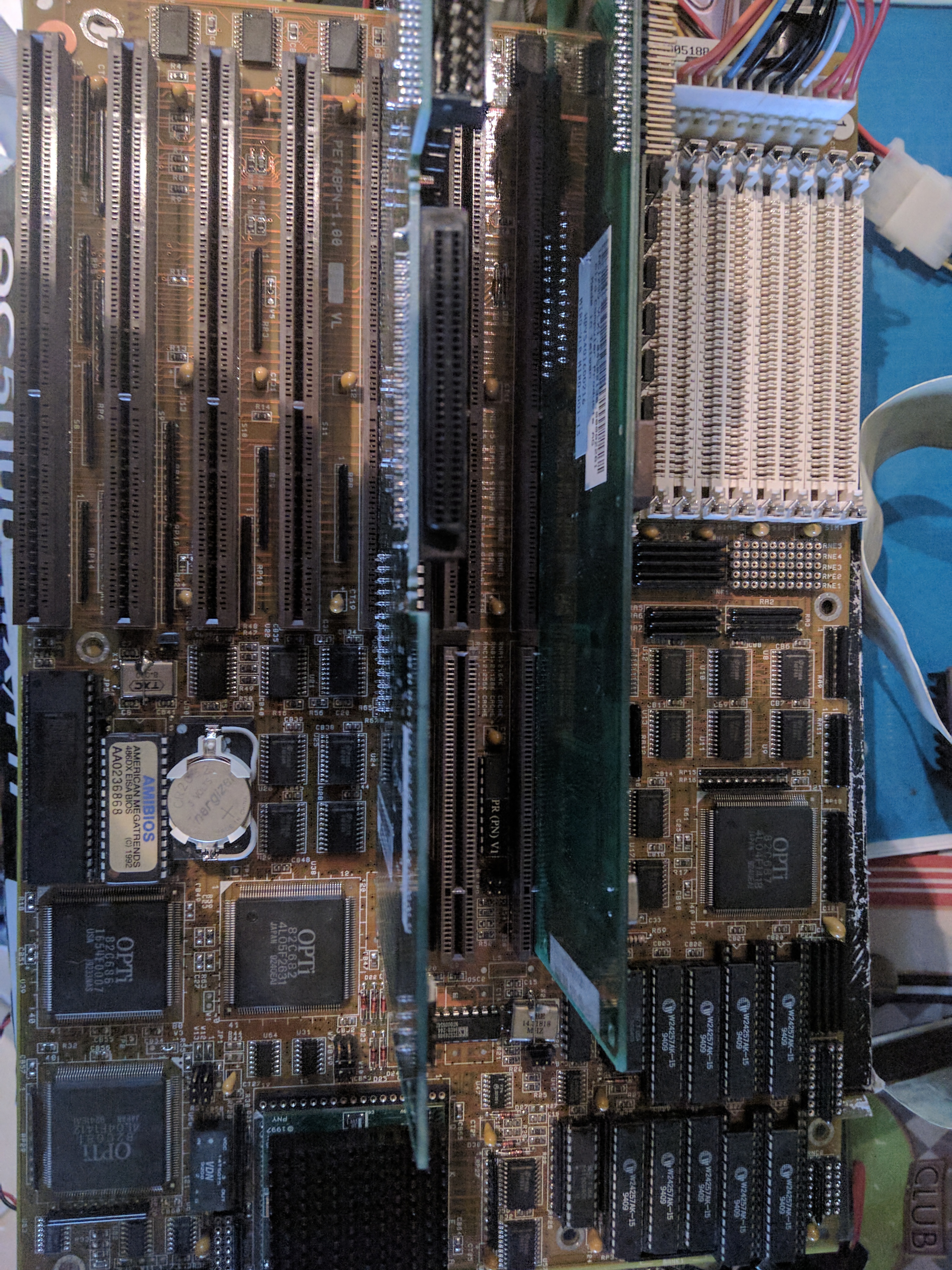 It's a TMC PET48PN Rev.1.0, an EISA+VLB board based on Opti 82C681 Chipset.
The board components datecode places it mid-1992, it has 8x 30 pins SIMM slots and 2x 72 pins SIMM slots, it only accepts parity simms from what I have tested, it doesn't post with no parity modules. There are 8x 28 pins 300 mils sockets + 4x 32 pins 400 mils sockets for L2 cache and 1x 28 pins 300mils socket + 2x 22 pins 300mils sockets for tag ram chips, the board supports a total of 128 MB RAM and a maximum of 256KB double banked or 512 KB single banked L2 cache. Due to the particular tag chips configuration it can cache all the 128 MB RAM and the cacheable memory size it's configurable in the BIOS: the settings are 4 MB through 64 MB in 4 MB increments and then you can select 128 MB. The Opti 82c681 datasheet states that the L2 cache is always in WB mode, there are no options in bios to change this. 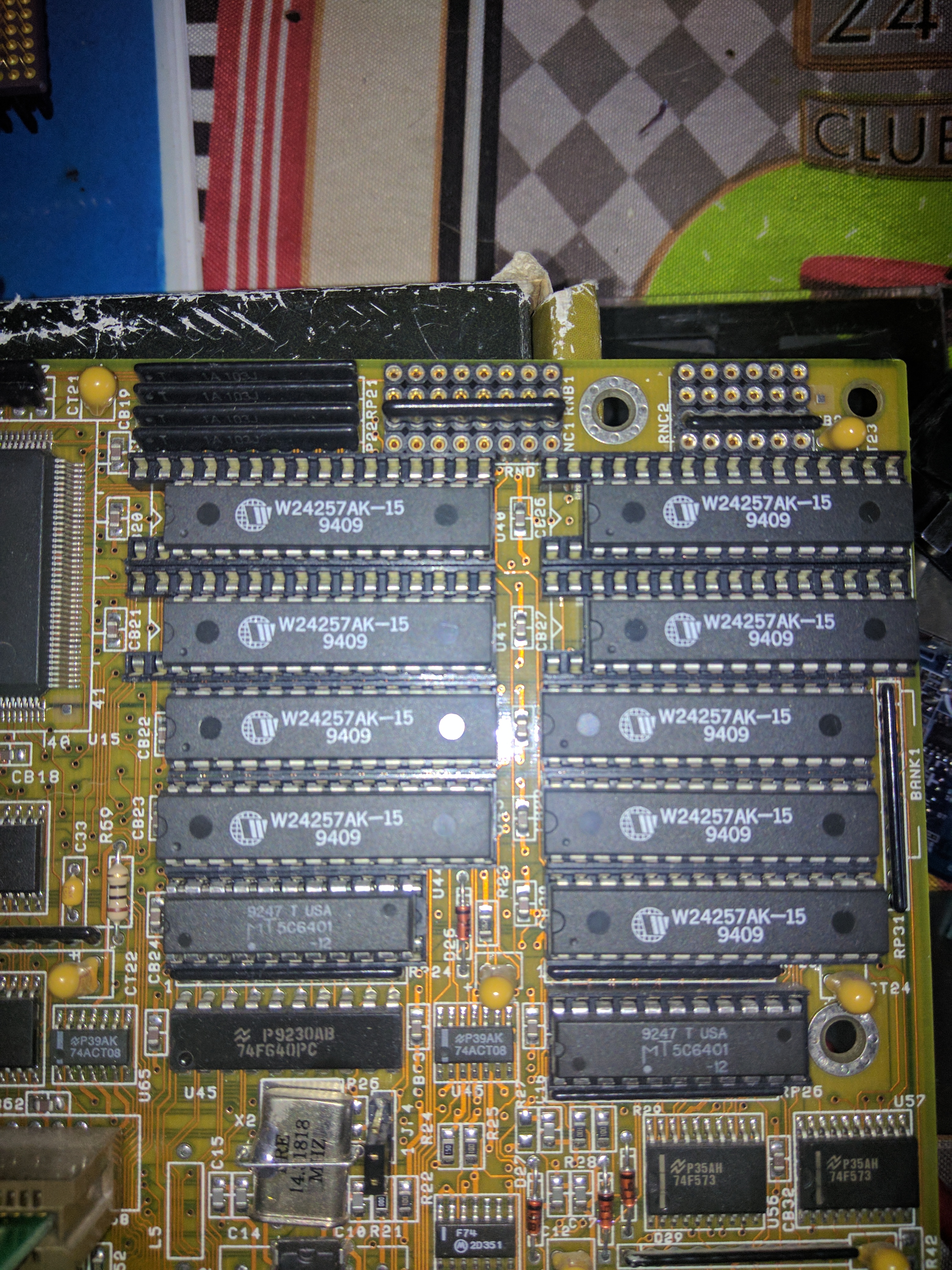 The BIOS is by AMI and it's a classic Hi-Flex with 1992 core, it got memory timing settings hidden, but they are still configurable with Amisetup 2.99. The board uses a RTC chip to save standard cmos and eisa cmos data, it's a DS1387, pretty much equal to DS1287 but with more NVRAM (4KB in total), when I received the board the internal battery was depleted so I hacked it with a CR2032 battery holder.
The board was certified by the manufacturer as 50Mhz bus capable and tested, the value 50Mhz has been imprinted on the Opti 82C682 IC, on a sticker in a corner of the board and in the bios string ID, as other EISA board it also got a unreported 66 Mhz bus jumper setting. (Jumper settings: https://stason.org/TULARC/pc/motherboards/T/T … 86-PET48PN.html)
I decided to use with it the following peripherals:

I used the following ECU to configure the EISA Scsi adapter in EISA NVRAM:ftp://ftp.necam.com/swan-zds-ftp/ecu/tmc/tmcecu27.zip
The Miro Trio32 works with 50Mhz bus at 0WS jumper settings on the mainboard. 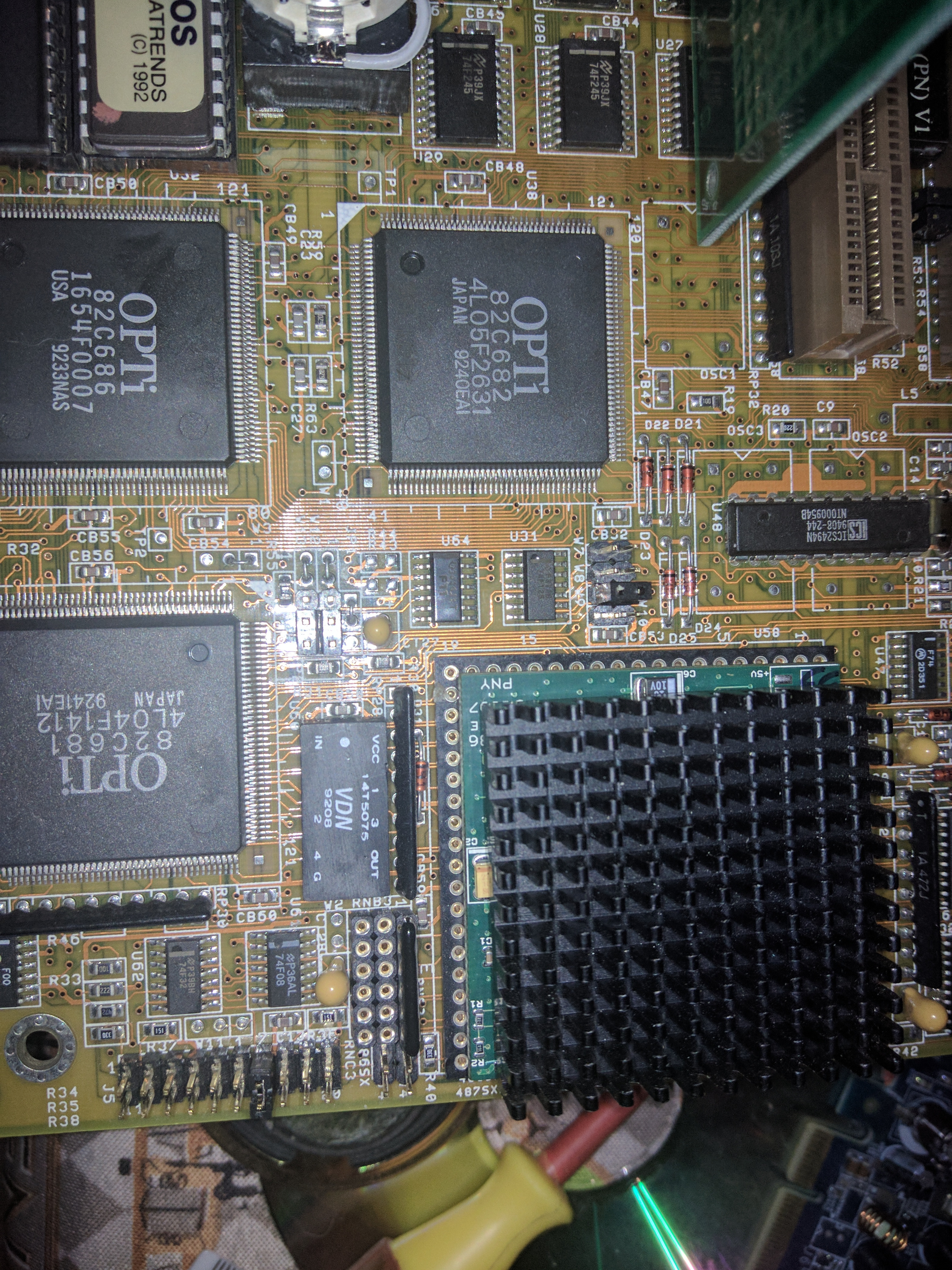 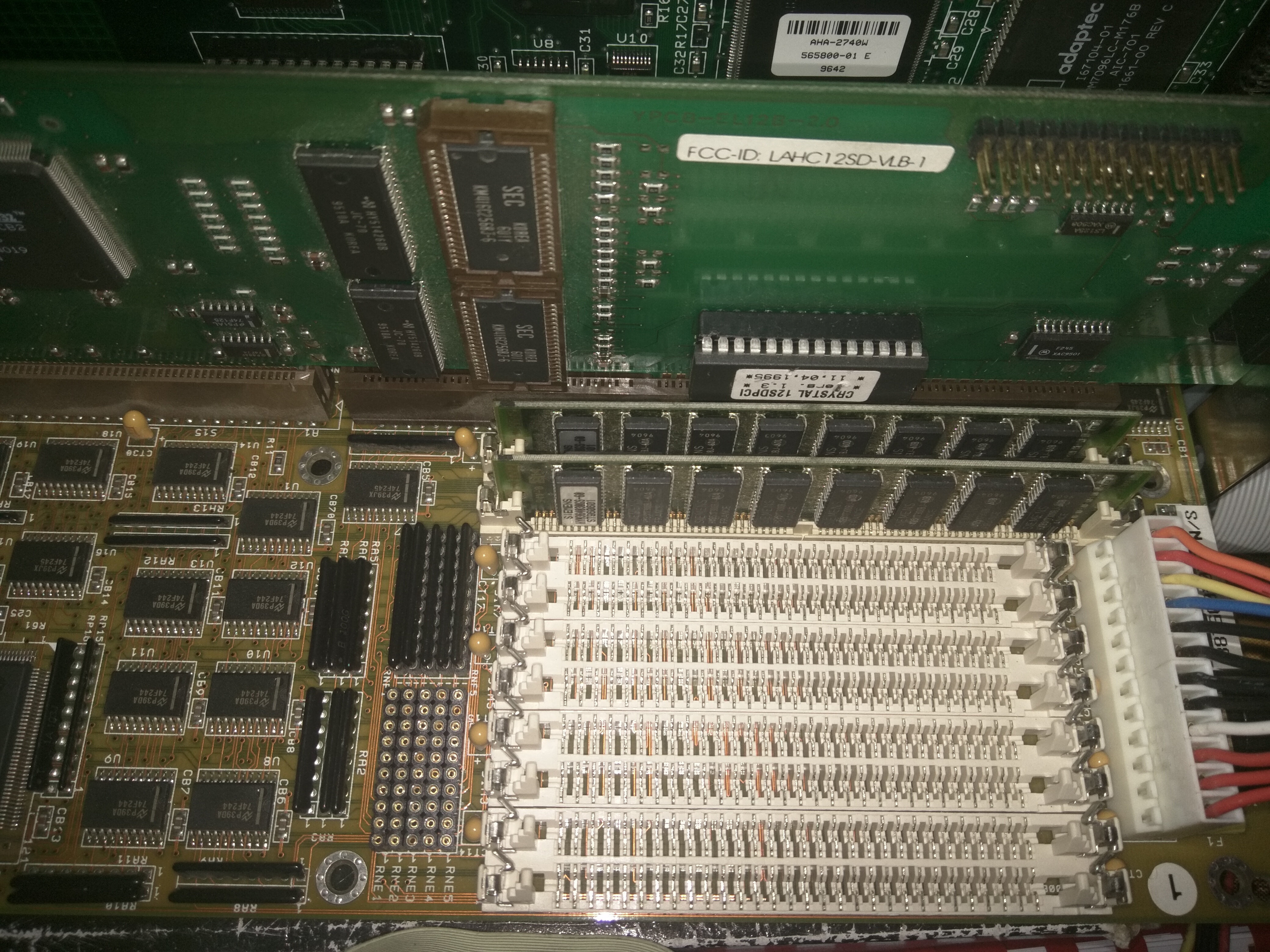 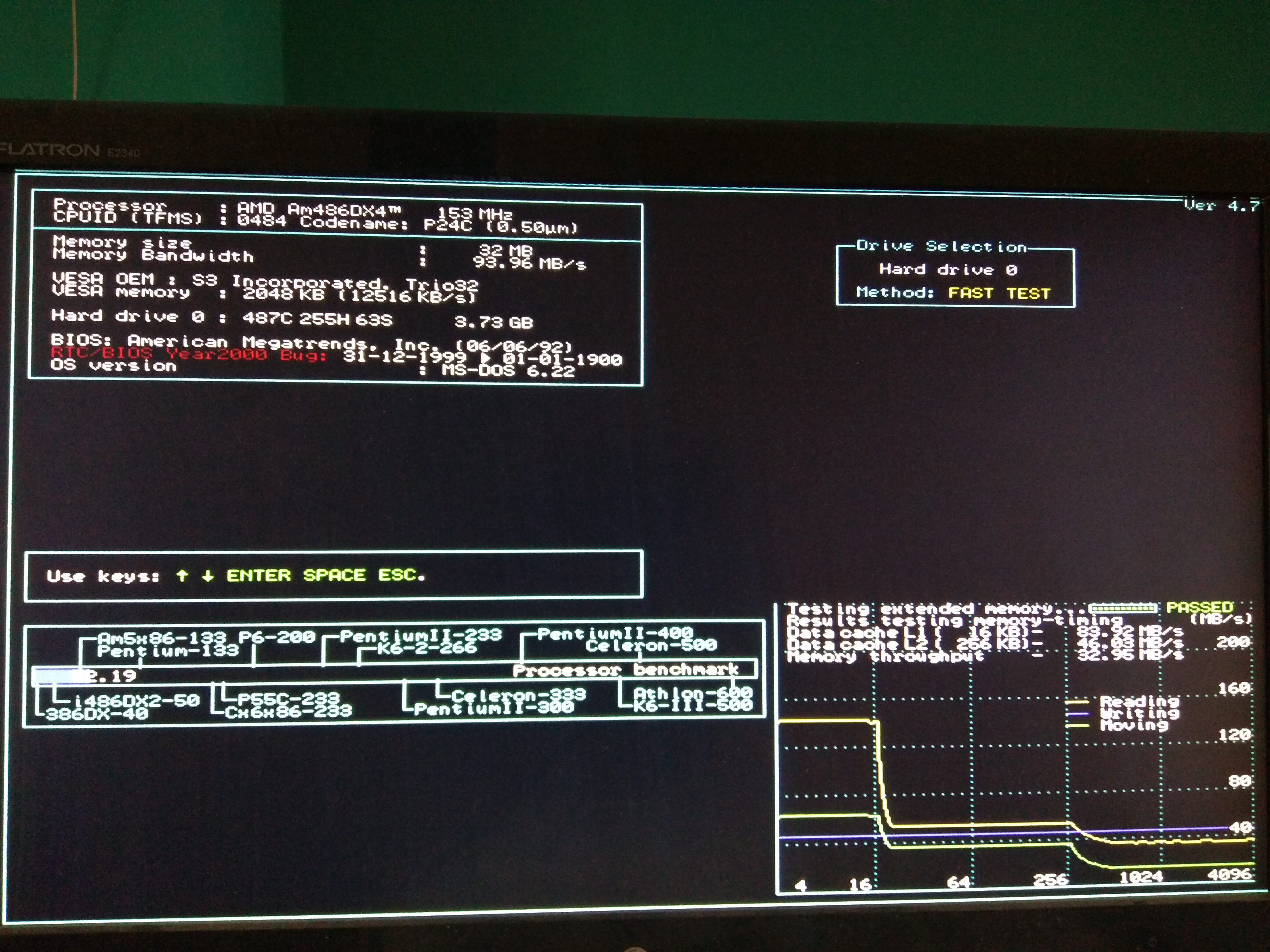 Considering that the board is from 1992 and the VL VGA is only 32bit, these scores are not that bad imho. More to follow...

Reply 1 of 47, by Anonymous Coward

Cool, I didn't know that these were officially rated for 50MHz. The memory performance numebrs look alright.
I used to have one of these, but I wanted more support for cache and RAM so I sold it and got some SiS boards.
Another thing that kind of bothered me is that these TMC boards strangely lack a ZIF socket.

Cool, I didn't know that these were officially rated for 50MHz. The memory performance numebrs look alright.
I used to have one of these, but I wanted more support for cache and RAM so I sold it and got some SiS boards.
Another thing that kind of bothered me is that these TMC boards strangely lack a ZIF socket.

Indeed the max L2 cache for Opti 82c681 is 512KB single banked so you loose the memory interleaving, memory performances are also lower than SIS EISA chipset, however it's also true that the bios is a Hi-flex 6/6/1992 core, I'm quite sure that with an updated bios from 1994 core the performances would be much better. AMI Baby EISA and ACER POWER 486e mobo used the same chipset, might try one of those bios if I will manage to find them. I also tested the HDD speed of the aha-2740w and it tops at 16MB/s using wide channel. Overall the system is very stable and it doesn't seem slower using it than a late 486 PCI system 4/5 years younger.

Reply 3 of 47, by Anonymous Coward

I think you will be sorely disappointed with any BIOS from an Acer system. I have an Acerpower EISA active backplane board (J3) with a dual P60 card (it can also take a 486 card). The BIOS is from 1993 or 1994, but it's some proprietary acer crap. It's not an OEM job from phoenix or award. The options are very limited, and the performance stinks. I think the AMI BIOS is pretty decent. I suspect the AMI Baby EISA board uses a BIOS with the sa me same core you already have. I doubt they made a winbios for that product. Generally for EISA 486 boards, 1993 is as good as you can get.

Did you try overclocking your EISA bus to 10MHz to try to squeeze out a little more bandwidth. If you got 16MB/sec out of your wide SCSI controller, you're doing pretty well. It tops out at 20MB/sec.

Also, I agree with your assessment that these EISA 486s (especially when using overdrive chips) feel more like later PCI systems.

Can you benchmark your Trio32 using DOOM Timedemo3 (Fullscreen, no sound) and 3Dbench2? I heard a rumour these are a hair faster than Trio64 in DOS and I want to know if it's true.

Yep probably you are right and Baby EISA uses the same core, I have read the Ami manual and the bios options described are exactly the same as mine. Even the shortcut keys to enable disable l1 and L2 caches works with the TMC board.
Using amisetup 2.99 I can fine tune ram and cache timings, the board at 50 Mhz automatically reverts to 3-2-2-2, 1 WS for Cache writes and 1 WS for DRam, I can maintain stability in Dos/Win 3.11 bringing it at 3-1-1-1 and 0 WS for DRam, the results you asked are the one reported in the first post:
3DBench1.0c (3DBench2): 84.2
Doom Timedemo3 fullscreen/nosound: 1474/2134 which should translate to 50.6 fps.

Edit:
Screenshot of a last minute cachechk (sorry for the flash) 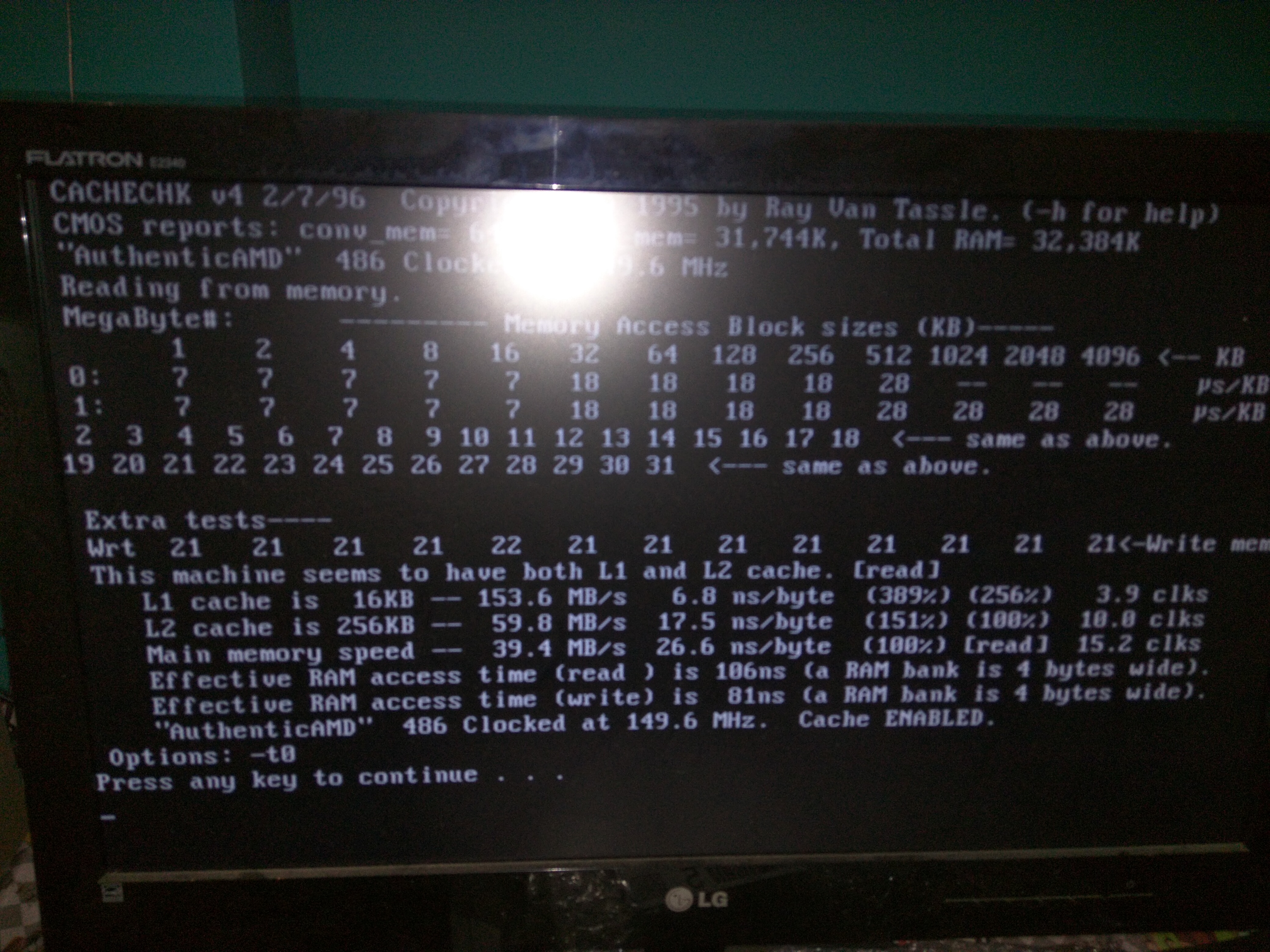 Reply 5 of 47, by Anonymous Coward

Next time I have a moment, I'll compare your results to my system with a Trio64.

If you ever get a chance, see if you can get a Cyrix 5x86 working in your VL/EISA board. I have issues getting them working.For the 2X/3X type chips I can only get those working if I set the multiplier to the "2.5X" setting, which actually connects to "BREQ". So far the only 3X/4X chip I have tried does not work at all! It's a 100/4X. I also have an Evergreen 133MHz Cyrix 5x86 kit that I haven't had a chance to play with yet. It has an interesting interposer that may fix some incompatibilities. It's supposed to be specifically for certain types of OEM systems.

I managed to acquire an Upgrade Socket3 with VRM, I tested the IBM 5x86c 100 at 40x3 and 50x2, the 50x2 wins for memory bandwith even with slower timings. The result are quite nice and the 50x2 config doesn't differ much from the AMD 50x3.
I successfully used the following 5x86 enhancements:

Reply 8 of 47, by Anonymous Coward

Well, that's certainly interesting. I honestly don't remember having great experiences with the Cyrix 5x86 at 2x50 in my SiS boards. 2x50 shouldn't be any faster than 3x33 in software that isn't I/O heavy. This is proven with the DX-50 and DX/2-50 comparisons. I'm really skeptical 2x50 is going to be faster than 3x40 for general use.

Do you have benchmarks at the other speeds for comparison?

Are you able to enable branch prediction in DOS (you'll need to disable LOOP and maybe RSTK).

I recall Anonymous Coward having issues with setting LSSER to 0 on his system (perhaps speed dependent?).

@Anonymous Coward I will post the deatiled results for both speeds, but I'm quite sure difference is minimal.
@feipoa LSSER = 0 works well while Branch Prediction is not stable even with RSTK and LOOP disabled, enabling Linear Burst crashes the system immediately. I tried to set the IBM 5x86c at 2x66 but the board does not post, while a PGA AM5x86 post at 4x50 but it does not boot, that is at 3.3V so it's pretty normal. I should modify the interposer with variable resistor for overvolting.

I didn't try the CPU at 3x33, I only tested it at 2x50 and 3x40 and it's not stable even with only branch prediction enabled and loop disabled, but it's very stable with btb=off and loop=on plus the other enhancements written above. The same CPU works fine in Dos with branch prediction enable on a LS-486E and a Biostar 8433. I got a qfp IBM 5x86c but I have to find a pga adapter to solder it to before I can test it. However I think the Opti chipset will not post at 66 Mhz bus, it's not the CPU.

Interesting. Anonymous Coward, didn't you witness the opposite result on your EISA board, that is, BTB worked in DOS but not LSSER?

Interesting. Anonymous Coward, didn't you witness the opposite result on your EISA board, that is, BTB worked in DOS but not LSSER?

For stable I mean no hangs or strange behaviours at least for 6 or more hours of use: games, benchmarks and so on.

For an Opti based board this is quite speedy.

The various results at different speeds under speedsys. 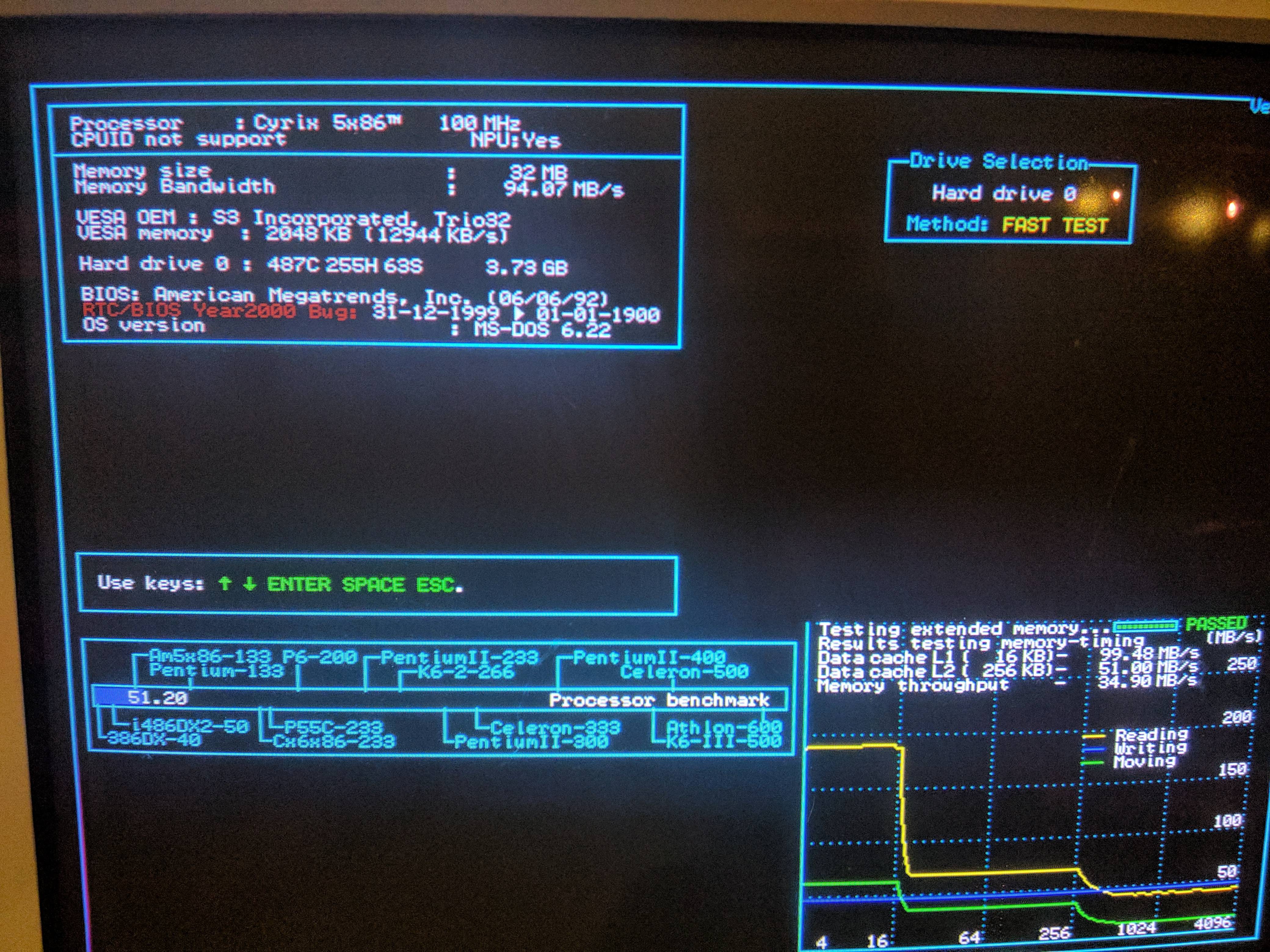 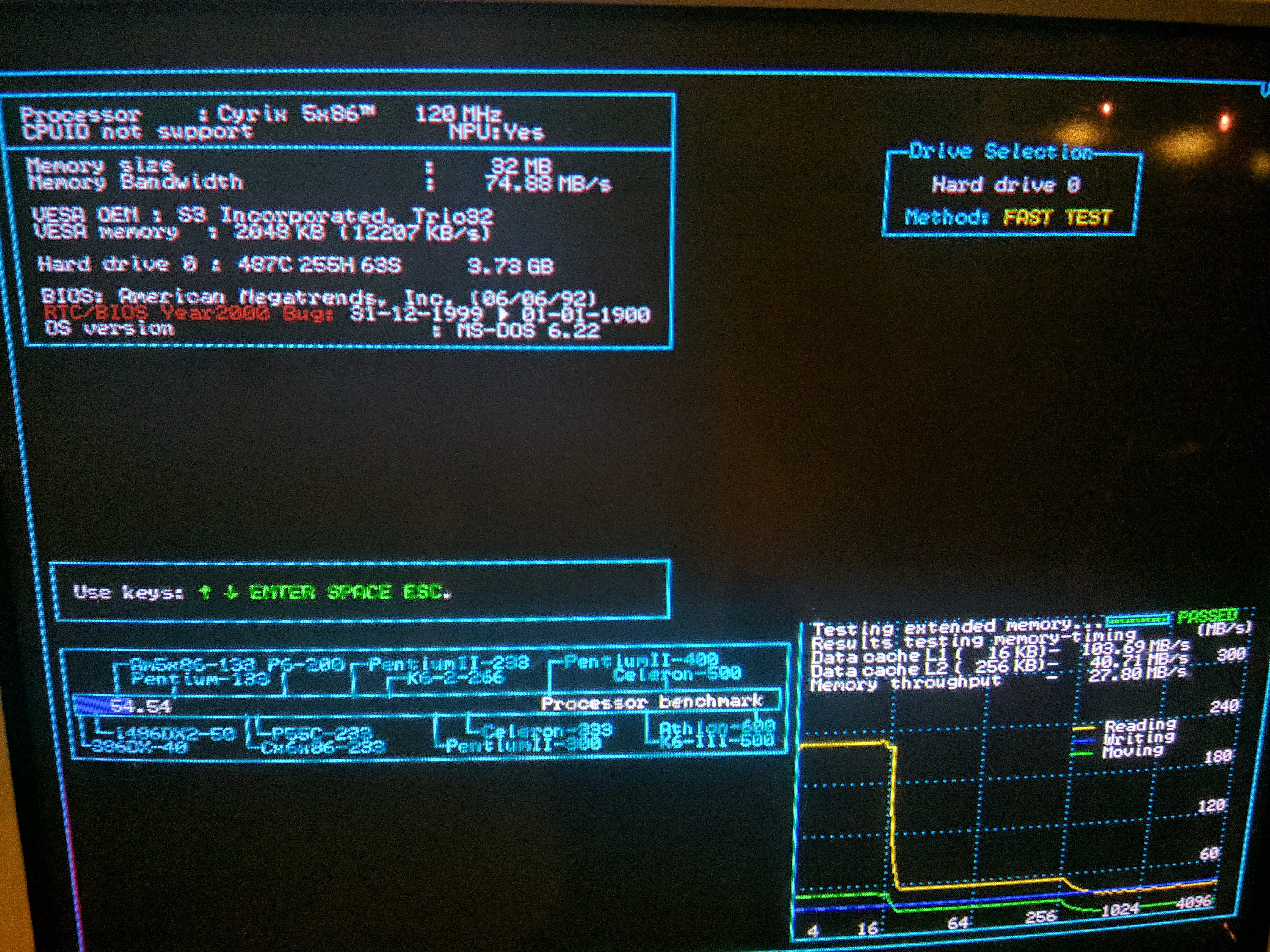 As you can see with this bios release and with the amisetup limited adjustable settings 50x2 gives the best overall results.

In the previous post I mistook the 120mhz CPU score with the 100 MhzCPU score. I'm sorry.

Are you able to boot into Win9x and WinNT4 and run some programs, e.g. internet explorer, Office, Win games, and not have the system crash?

Indeed it's slower but it's also true that the mainboard is from 1992. As I said before using the system feels quite responsive even if the scores are not on par with PCI systems, it's a pleasure to use it and it feels more like a PCI system than a Isa system. I don't use win9x or nt on such builds, I use them with Dos only. If you want I could install win95 or NT4 for test purpose.

It would be interesting to benchmark it against AC's EISA system. I think his memory scores were more in the PCI-486 range.