I own two Tulip AT Compact 3 systems. Both have problems, one has a good looking motherboard, but the on-board FDD and IDE controller is not functioning, and the other has a horrible battery leak (but is/was working fine). I decided to combine the two systems into one good one.

I have to repair the acid leak damage first. The batteries are not on the motherboard but mounted above it, this one had leaked for years while in storage (I think). I ordered new sockets in China, will desolder the ones affected and see what it all looks like underneath. I can move RAM IC's from the other board. Swapped the guts of my IWILL ZMAXdp power supply (300w) with a new FSP 400w Flex-ATX power supply and new fans. Perfect fit, and the power supply works fine. However, the old power supply blowing appears to have taken the motherboard with it. 😒 I'll have to check all the mosfets and surrounding circuitry. The computer turns on, but I get no post. I also tried a different video card and new RAM, both I know that work. No dice.. just a black screen, not even any beeps. 😠 I also have two new Opteron 250's on the way (less than $10 spent) to confirm the CPU's didn't get taken out, since I've seen similar situations before with fried CPU's. 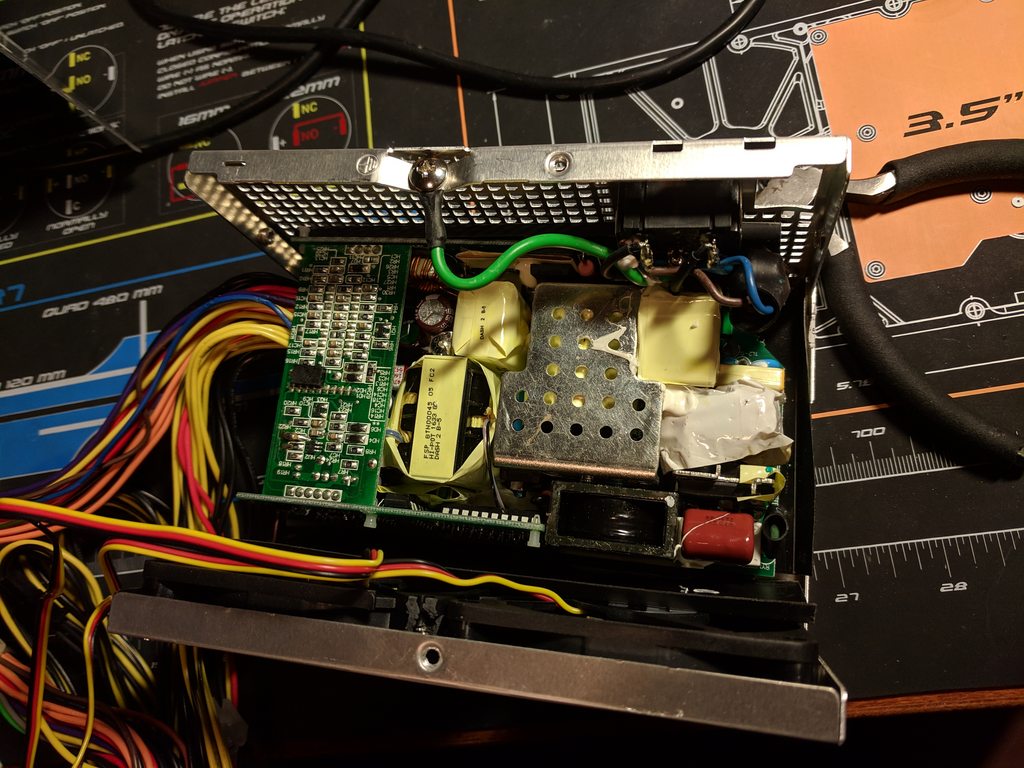 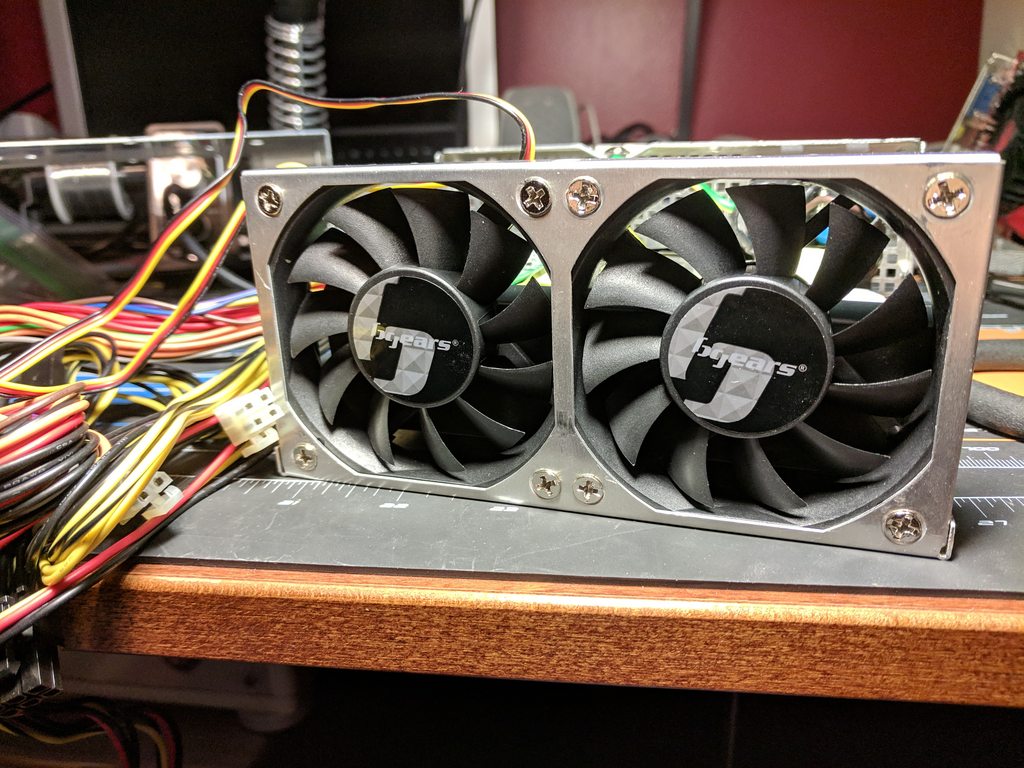 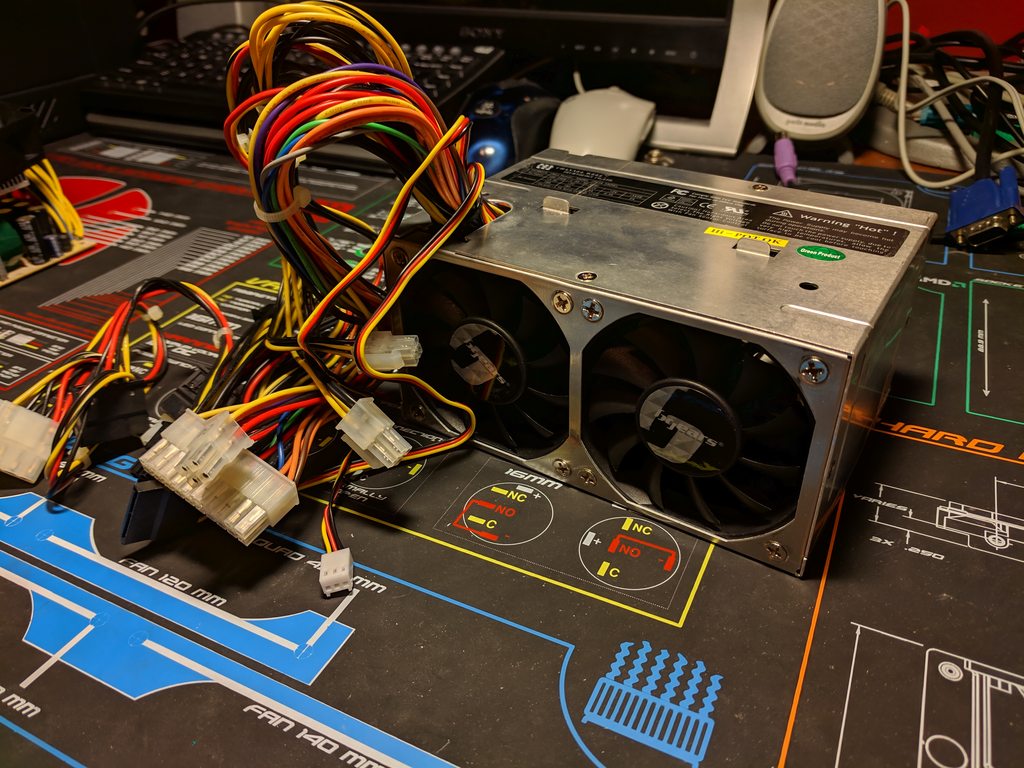 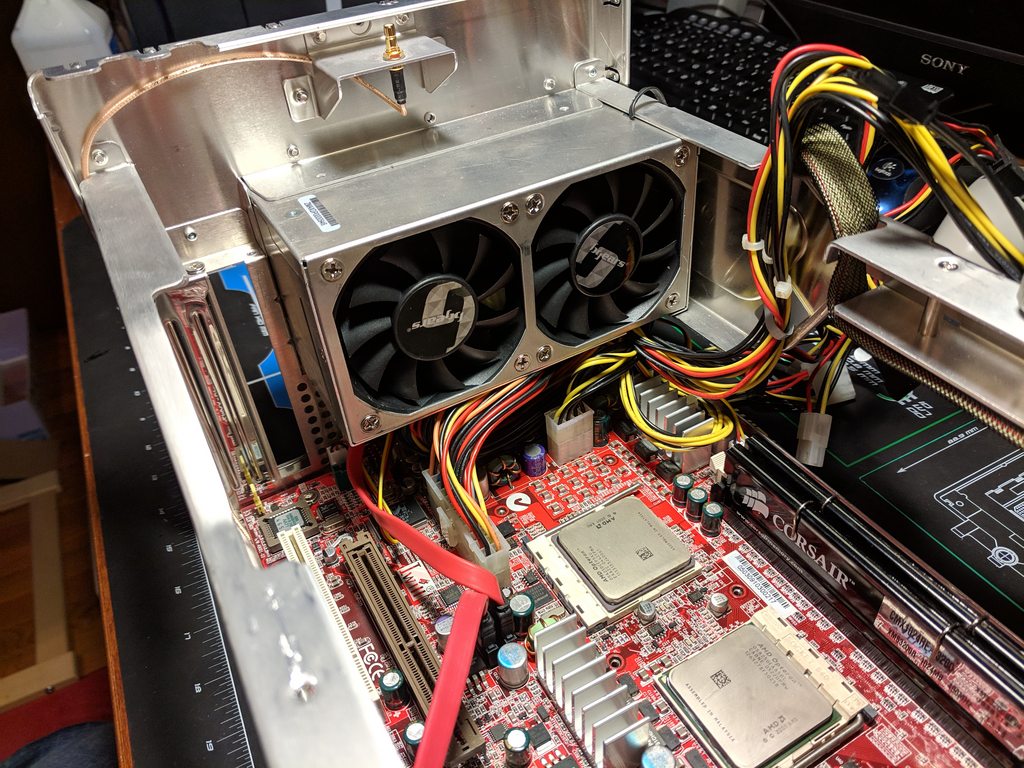 I'm using a method I saw mentioned over on the thinkpads.com forums where you just scrape it off with an old credit card or something similar. It's a bit slow going in my case, but I'm getting there. The last time I tried cleaning off this sticky rubber crap on a Thinkpad with a magic eraser and I felt like it didn't do as great a job as this seems to be doing so far.

Unfortunately as I found out previously, a magic eraser is not exactly a magically perfect solution 🙁 In fact the last time I tried it (on a different Thinkpad), it just made the lid worse. I've noticed other people having mixed experiences using magic erasers with Thinkpads where the rubber coating has gone sticky and gross... wonder if it has to do with how "bad" it has gotten. *shrugs*

Cleaned up my Sega Master System & Mega Drive consoles a bit. They're in a slightly better state now. The Master System in particular was rather disgusting inside. Pulled my games out of storage too. Couldn't find about 8 of them nor my Master System Converter, I really should get my retro storage more organised.

I've been having to go through the games 1 at a time, cleaning the contacts on the cartridges of each one. The amount of black/grey gunk that comes off each cartridge is astonishing, but they all appear to be working so far.

Never had too many games for either system, money was tight when I was a kid and games for the Commodore 64 were so much more affordable. 🤣

Wasn't able to detect the problem yet. But i found out that EZ-Drive has a sys file (ezmem.sys) that you can load in config.sys before anything else, that frees up 5KB of conv. memory that the overriding bios for hdds originally takes. So no drawback on using EZ-Drive!
Also properly configured my soundblaster card so cd-rom is now on the sound card's ide port, while hdd is attached to the super-io card.

At least some interesting things found. 😀

Next thing to try out is to use a real hard drive and see, if problems are created by the use of CF card. I have a perfect 504MB hdd for that. (But if possible at all, i would avoid using any moving parts in my retro PCs...)

Recapped my newly acquired IBM 5175 professional graphics display. This particular example had been slightly modified to take a VGA signal sometime in its life, so I'm going to use it with my IBM AT. 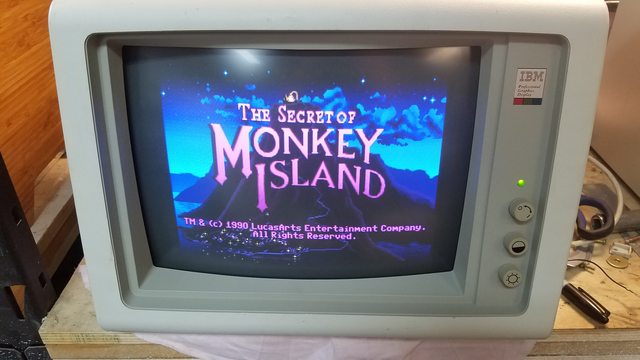 The picture is amazing.

I bet this must be a trip for whoever is monitoring the Vogons domain....

- Tweaked Arachne 1.97 GPL a bit, getting better speed wise. Kind of amazing a 30 year old computer can handle 1024x768 and render something.

- Tweaked and finally got DOSLYNX working, all I had wrong was the connection type was set to BOOTP in the DOSLYNX.CFG, changed that to DHCP and now it's happy. The difference between DOSLYNX and ARACHNE is like night and day.

I'm actually quite enjoying DOSLYNX TBH, it's not that slow at all, surprising considering this is a 12 MHz 286 I'm typing this on. Some other tweaks have made the appearance of pages more pleasant, and I'm still shocked I could logon to my acct here.

For a time now I wanted a machine that is a bit more accessible than most of what I have. Most of those are under a pile of other PCs or disassembled in boxes and I'm often too lazy to get them running to pleasure myself with them. I had a chance to save an old laptop from being scrapped. It's an ASUS L7200, which was an entry level laptop from around 2000 (give or take a year). It came with it's original charger, bag, driver CD, users manual, and some other disks. It was probably dropped. It has a little crack at the hinge a white line at the top of the on the screen and some flickering when I'm bending it so there must be some issues around the ribbon cable and the floppy drive doesn't read any of my disks and screaches as if the drive belt fell off. I will have to look under the hood, but otherwise it's in good condition and runs really nicely.

I'm currently running it with Windows 98 and planning to downgrade to 95. I'm having some issues setting up the audio driver. It doesn't want to work even from it's own driver CD for some reason.

It's performance is decent for the era of games I'm targetting. My only issue is that ASUS decided to solder a slice of potato on the motherboard to handle graphics. It's a Silicon Motion SM910 Lynx chip with 2MB SGRAM. I'd expect at least some form of 3D acceleration even if it's in name only from a laptop this young, but I'll have to do without it.
Carmageddon, International Rally Championship and Worms Armageddon, which I tried so far runs nicely, however with Quake I have to go down to 320×240 resolution to keep the framerate at a playable level.

Over all I think it will be worth keeping it on my desk after a bit of fixing. I recently orderd Tomb Raider 1 and 2 and I'm curious whether it can run them at a decent speed or I'll have to go over to my desktop Pentium MMX or one of the Pentium 2s.

A couple of days ago though;

Two of my kids were doing some retro gaming (Re-Volt on the Sega Dreamcast):

But of course I was in for the REAL retro-thing:

Added a Ralink RT2561 MiniPCI WiFi card to my IBM Thinkpad A20m. A pretty cool upgrade, considering it can do WPA2 security if you follow dr_st's instructions on his website (just google and you can find it).

It actually feels kind of surreal having integrated WiFi with WPA2 on a retro Windows 98 laptop.

The only drawback I have noticed is that the range of reception seems to have decreased quite a bit, probably because this particular machine was not really designed to have a WiFi antenna underneath it. There's a lot of metal surrounding that antenna, and it probably is in just about the worst spot on the machine.

Plus this does mean that I had to forego the Ethernet/modem card, but that's OK.

But it works, and that's what I was looking for.

Posting from the machine now, connected to my main home WiFi instead of the unsecured network I have set up for my retro computers.

JV-35/50/90/1000 expansion board. There were two, one providing a JV-35 engine and GM sound set on a board (VE-GS1), and the other providing a JV-90 engine and the JV-80/1000 sound set plus PN-JV80-04 Contemporary Composer sound set on a board (VE-JV1). And when I write "engine" I mean it's basically the heart of a synth on a board, with all parameters accessible via MIDI (unfortunately Roland borked the integration of the boards into their host synths, so accessing all parameters via the user interface isn't possible)...

Managed to fit in a bit of work on my far-too-backlogged effort to build a DOS installer toolkit analogous to InnoSetup or NSIS.

Specifically, I refactored the internals and, while I was at it, found ways to tune the routines I'd already written to shave down the final binary size by 74 bytes. (Mainly stuff like mutating pass-by-value arguments rather than using temporary variables and refactoring loops to produce tighter code, with another 18 bytes of potential savings on offer once I've got some asserts in place to ensure they don't cause hard-to-identify brekage if someone tries to build it under a memory model where the Program Segment Prefix is no longer in the same segment.)

I also try to announce anything retro-relevant on on Twitter.

Received an IBM Thinkpad 600E in the mail, and set it up. It will be replacing the Thinkpad A20m, as the A20m is simply too large and heavy.

So far I am impressed. The keyboard is very nice, much nicer than the A20m, and more akin to the keyboard on the Thinkpad 560 series. The Pentium II 400 MHz CPU ticks along just fine so far with anything Windows 98 can handle. The 1024x768 but still 13 inch screen is nice, as 14 or 15 inch screen laptops are just a little too large for me.

An SSD upgrade has maxed out the IDE interface. PCMCIA 54mbps WiFi card works nicely, and if I enable "pipelining" in RetroZilla, browsing the internet is zippy, and I am getting download speeds of 700 KB/s consistently, pushing 1 MB/s.

The battery will require a rebuild. I'll attempt it tonight. But I also have a battery for the "UltraSlimBay" coming in the mail. I'll also be replacing the CMOS battery.