Only 2 VLB devices at 40 MHz? I can see why some boards omitted the 3rd VLB slot.

I started to think about which storage option is the best for this build.

The original Promise EIDE2300PLUS isn't at all a bad performer. Is an early period-correct Fast-ATA 2 implementation, it has its own BIOS and dos driver that can tweak it and drive up to PIO2 or MW-DMA speeds.

But I picked up this beautiful Adaptec AHA-2842A and given by a kind of exotic nature of this build, thought the SCSI would be a more suitable choice.

Both have a FDC controller which is great. The Adaptec lacks serial port though, but it is nothing a simple ISA card can't fix.

Performance-wise I think the Promise has potential to be a bit faster - this is due to lack of support of synchronous SCSI transfers on the SD2SCSI v5 device I am using. But I might upgrade to v6 at some point...

Which would would you chose?

I use the Adaptec AHA-2842A in my Am5x86-160 build (Asus VL/I-486SV2GX4). I'm not sure about the NexGen, but on VLB/ISA 486 motherboards, getting a VLB bus mastering SCSI controller card to work properly with the CPU in write-back mode can be a challenge, if not impossible. The Adaptec AHA-2842A has a jumper on its PCB to work-around this issue. It worked for my system.

For systems with weaker CPUs, like a NexGen P90 or 486, normally using SCSI over IDE reduces the CPU overhead. Can you benchmark the Promise+CF vs. the Adaptec+SCSI2SD? I have only used v6 of SCSI2SD so I cannot say anything concerning the v5 adapters. I haven't benchmarked the SCSI2SD v6 in anything faster than a 386/SXL yet, but I have booted an IBM 5x86c-100 system using SCSI2SD v6 on an Adaptec 2940U2W card and it felt as fast as the system when using a Ultra100 ATA controller.

The benchmarks on my SXL system can be found here for SCSI2SD and CFtoSCSI. SCSI2SD - Comparison of SCSI SD, CF, and HDD performance

As far as I can remember, both the chipset and the SCSI controller need the work around for writeback support. Not sure how many chipsets actually supported it, but pretty sure SiS was one of them. Do you have the chipset revision?

I disabled the write-back support by opening the J5 jumper. What is it actually doing? Surely it can't control L1/L2 WB mode, because that's the matter of CPU. Perhaps it just forces non-DMA IO to ensure cache coherency?

Adaptec AHA-2842A detects the device, but reports "Missing operating system" when trying to boot from the first drive. The OS is definitely there...

When I put in my AHA-1542CP (ISA) which boots great with this SCSI2SD and card in my other systems, it doesn't even detect devices and the SCSI BIOS times out.

I think I will need to try to move things around in BIOS.

Got that. It is actually more sophisticated. The JP5 directly connects to B38 pin of the VL-Bus which is #WBACK to support cache coherency in WB systems.

Some systems, like my Acer socket 4 system also don't detect any IDE drives when I use a Promise Ultra100/133. Never figured out what the issue was, but I switched to a Promise Ultra150 SATA controller, it could detect the drives. So you may need to experiment with different controllers. On a similar note, I have an Adaptec Ultra100 RAID controller that doesn't detect my Maxtor drives, but works just find detecting 4 Samsung drives. So it could also be that your controller doesn't agree with your hard drives.

The "Missing operating system" error was due to the fact that my boot disk is 2GB and apparently the AHA-2842A with existing BIOS can't boot from it.

My AHA-1542CP despite being just ISA has newer BIOS that can handle it just fine.

Resizing the boot disk device to 512MB worked just fine. Once booted to DOS the 2GB volume can be accessed (without any driver), so it is just a matter of BIOS boot support.

As for speed, it is noticeably slower than the Fast ATA-2 Promise controller. Only about 1200kB/s reported by Checkit. The promise is about 3-4x faster. I will have to experiment with cards/settings.

Could be related to how the Extended BIOS Translation is handling drives larger than 1 GB on the different SCSI cards. I've run into this between the AHA-2842A, AHA-1542CP, 2940U2W, and another non-Adaptec VLB SCSI controller (the name escapes me at the moment).

EDIT: Thinking some more about this, I think I could not move a large SCSI drive (e.g. 8 GB) between the 2940U2W and the 2842A. Similarly, I could not move the hard drive from the 2842A to a DTC 3274VL VESA Busmaster SCSI host adapter as they use different translation schemes for either above 512 MB or above 1 GB. Do move the drive around from one to the other would require running FDISK and setting up the HDD again, basically, starting over. For drive of 512 MB or less, you are usually safe to transition the HDD between various controllers.

The system got the SCSI upgrade. In terms of performance it is a downgrade mainly due to slowish SCSI2SD 5 device.

I have two ISA slots left 😀. One will be taken by a network card. Still deciding on the model. I am actually thinking building a retro Token-ring or 100VG-AnyLan retro home network.

Also need to sort out cabling mess. I like the idea of placing ribbon cables under the board so that the interior of computer is tidy looking.

I don't blame anyone using spinning HDDs in their retro builds. But CF cards are way more practical in many ways. The best thing is that with an angle pin connector I can install it directly on the controller without wiring any ugly ribbon cables around

Here you go:
https://en.wikipedia.org/wiki/Microdrive
Hearing those spin up is the cutest thing. 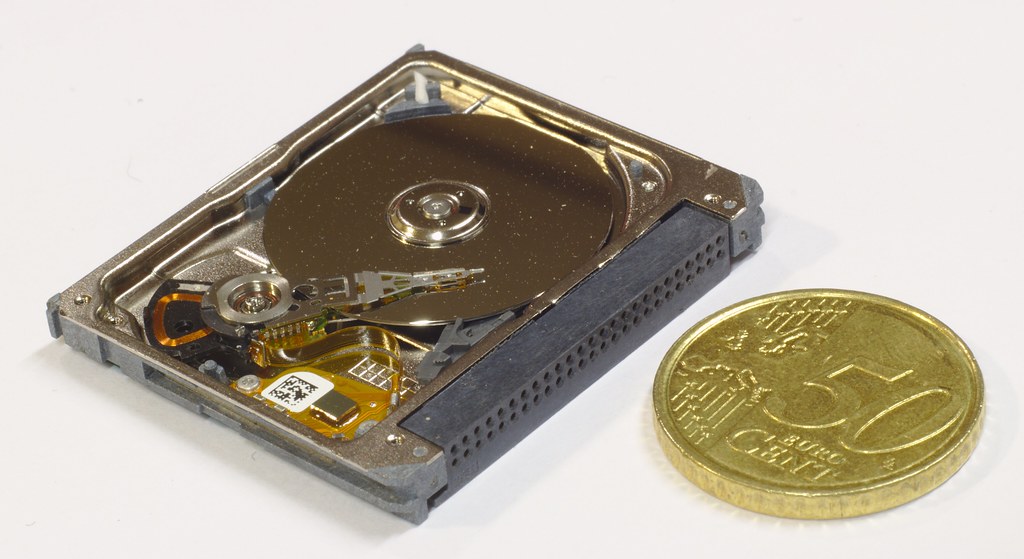 I run a Mach32 and that same Promise IO card at 50MHz VLB with no wait states on OPTi 82C895 based motherboard, it runs pretty nicely but I need 10ns cache to maximise the performance on CPU end.

I was experimenting with different storage options:

The SCSI2SD v6 really makes a difference. I think non-wide/ultra SCSI-2 (or anything attachable to VLB) can't be much faster than this. 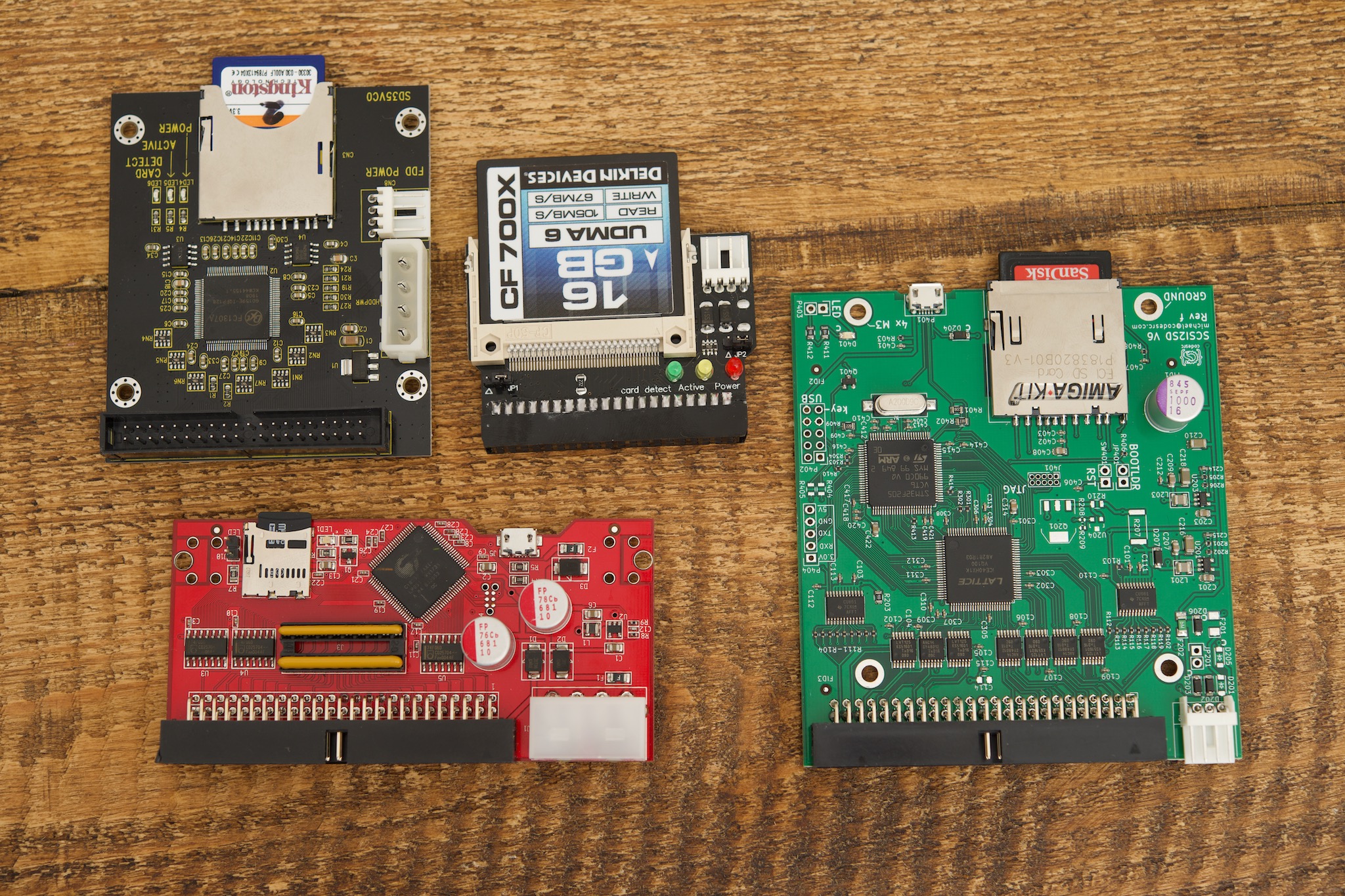 Here you go:
https://en.wikipedia.org/wiki/Microdrive
Hearing those spin up is the cutest thing.

Not a good idea. Microdrives were made to be used for a maximum of 4 hours a day. They were for digital cameras mainly, not for computers. Even when being used 4h/day, they have a very short life-time.

The Promise vs SCSIv6 difference is IMHO not noticeable outside of benchmarks. Both are 10x faster than a period correct spinning HDD. Both in transfer speed as well as "seek" time

I plan to test also different SD and CF cards. But I believe they won't make much difference.

Do some SCSI2SD benchmarks like this? SCSI2SD - Comparison of SCSI SD, CF, and HDD performance

Interesting. Are you able to benchmark the scsi2sd v5 on the 1542cp? It would be beneficial to know if the v6 offers any improvement over v5 on the isa bus.

However, that's with a different card as the v5 only takes micro-SD (and mine is average class10 rated) unlike the full-size SD (premium 95mb/s rated) on the v6. This could make some (small I hope) difference.

I will try to get one of these micro-SD to SD adapters and use the same card to see eliminate the card performance difference.