Today when I updated my system (Manjaro Linux) using yaourt command in terminal, I saw that there is this new version (dbgl 0.90-2).
But it can not be compiled.
When it validating source files, the 'dbgl.sh" fails, and gives an "One or more files did not pass the validity check!" error.

Ihave one question.
In dbgl option, there is an option to indicate rom directory fot mt32 rom.
I don't know that I must write in this part.

I have tried to indicate the path but error.
Anbody can help me?

wished it was that easy.

now, to jump on a newer train, i had a look at what actual versions incl. the mt32 patch.

all dependencies are correctly installed for this dosbox version.

starting a game in dbgl 0.90 via the new dosbox version, i can hear no music playback at all.

what am i missing?

I have a really stupid question... let's say many of my profiles (but not all) have a link named the same way and there's a typo. Can I change it on all its instances with a single step?

And no, I'm not asking this feature to be added to DBGL. Chances of people making the same mistake as I did are close to zero.

Neville, I think the easiest way to do this is to close DBGL, and make a backup of DBGL's "db" folder. Then, load db/database.script into your favourite text editor and search/replace the string that you would like to correct. Just restart DBGL to test your changes.

That seems to do the job. Thank you!

I've just released DBGL 0.91 on the website, no changes since the last beta, enjoy!

When downloading cover art from mobygames, a lot, but not all, of the images are corrupted. I have not used the cover art downloader in months, so I don't know what broke it. But the cover art that I downloaded in the past is fine. I tried it with 2 different games, and the effect was the same.

Dosbox "rook" here so be gentle!

Just bought Madden 97 (dos) and it comes with (2) cd's. What dosbox front end would be easiest to run the game in win10?

So far only tried D-Fend Reloaded with single cd games, didn't find any info on working with multiple cd's. Might've overlooked
something in the "help" files.

You can mount two or more CD-ROM images as D:, and then change between them with CTRL+F4. 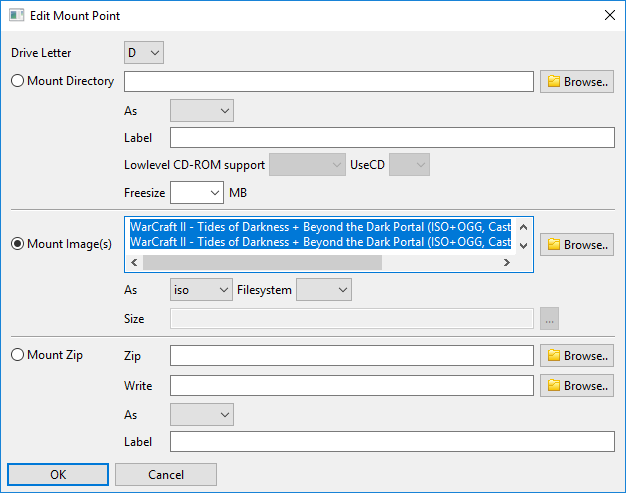 The "mounting" part is what annoys most people who use DOSBox, but it's not complicated. Normally all you need to set up is a folder in your computer to act as C:

In addition to the corrupted screenshot problem I mentioned above, I have one other strange issue.

When I right click on an entry and select "Start manually with" the behaviour is different for the DOSBox instance that is set for your global default or the game default and other DOSBox versions.

Selecting the DOSBox version that the game is set to start with, it will mount the configured volumes and change to the directory. Basically everything but start the game, which is great for troubleshooting.

But select any other DOSBox version, and it will not mount the volumes. There are also no errors to indicate it even tried. Running the mount commands manually will work fine.

FYI, I have regular DOSBox, DOSBox ECE and DOSBox-X as my choices. With DOSBox ECE set as the global default.

Thanks rcblanke. As to the corrupted images, it happens with any large image it seems. In particular the box shots seem pretty much guaranteed to trigger it. Are you converting the images between the selection and copying them to the screenshots directory? If so how?

A few corrections in this new build:

All the latest files To upgrade from 0.9x, just fetch dbgl.jar as usual.

I just applied the fix and both issues are fixed!

Another problem that I have run into. DBGL sometimes gets confused with symbolic links on Linux. Basically if the directory directly underneath dosroot is a symlink, it handles it fine, but not when the symlink is further down.

In this example I will use QFG1VGA, where "QFG1VGA" is a symlink to a directory elsewhere on the filesystem (a directory holding ScummVM games).

This works:
Inside the dosroot directory...

This also works:
Inside the dosroot directory...

This does not work
Inside the dosroot directory (same as above)...

When I say it does not work, I mean from a DBGL perspective. DOSBox itself has no problems with it.
When you attempt to close the edit dialog, DBGL first starts suggesting:
Would you like to add the mount location "QFG/QFG1VGA", and pressing No it will give an error "You must enter a valid mount location", refusing to allow you to continue.

I can "Fix" the problem by saying Yes and editing he resulting .conf file by hand, removing the "mount D..." line that it added and changing the "D:" to "C:", and changing the "cd \" to "cd \QFG1VGA".
If I then run the profile, it will again give a warning that the profile appears to be incomplete, but clicking Ok on that, it will run it just fine.

here is a quick question: how to mount games with multiple discs?

selecting 2 cues at the same time is possible, but starting dragon lore from c: will not work then?

mounting only one image as d: is fine though.