ATX2AT I think was the first solution to address the issue. But it was a very limited run. And I saw one problem with it, besides its price: it used a custom-built cable. I saw that as a problem. I didn't like the idea.

So I decided to try and address the issue. And I produced a clone of it. But it was little bit too much to bite so I chose another project which is this one right here. A simple in-line adapter to adapt a 24-pin ATX power connector to AT power connectors. Which lets me use modern ATX power supply with OVP, OCP and short circuit protection, but also adds the missing -5V.

Recently Phil's Computer Lab and Necroware released their own ISA card version, which is very clever and simple. I was impressed. Even envious of such clean design. But some commented they would rather have an in-line solution. One is cheaper, one does not take an ISA slot.

If I can improve this design, what should I add, include or change? Have you seen something else yourself? Please, comment. I have spent enough time on this to not release it. It is of no use if left unreleased. Input is welcomed.

And a final note: I have a bunch of these and I must somehow deal with them. If anyone wants to buy one, post me a message send me an email ananananas@gmx.us. I also have bunch of the ISA card versions assembled but I would like to get a comment from Phil or Necroware before I wish to sell those. I don't feel right selling them. Maybe I can release the Eagle files and if you guys want to take advantage of those and make available an assembled version, perhaps that would be a solution? Because if I could order a bunch of 30 of those since you guys released them, I see there is even more benefit to the community to let these be even more easily available. What do you think?

Awesome project! I'm one who think it's a better solution to add -5 on the AT/ATX cable than using an ISA slot, atleast for my usage as I tend to fill them all up in my builds.

One thing though, I don't believe you can reply to PM's here on VOGONS because of your low post count, so might be an idea to add an email adress or other means of contact if you'd like people to acquire these from you.

Thanks. Yes, it doesn't seem to let me do that. I updated an email instead.

This particular unit is earlier version but the second version is practically identical. In latest version more copper was dedicated to heatsinking as with full 500mA load the regulator got to around 75C, which still isn't near the limits of the regulator, but better safe than sorry.

Luckily even latest ATX standard still includes -12V in the specification, so with a linear regulator it can be used to generate -5V. I have not come across anything that actually uses -12V but perhaps that was a compromise from the body that designed the specification, to leave one negative rail in place for simple generation of other negative voltages, while freeing up the -5V pin for other use.

maybe some network stuff use -12v I am not even sure as well
what is the prize of these? can you add it?

maybe some network stuff use -12v I am not even sure as well
what is the prize of these? can you add it?

I have these on eBay for $15 but I can do $10 plus $5 world wide shipping for forum members. I don't have switches yet so if you want one could you send me an email and I will let know when they're available.

What length are the wires? The wires to the switch look less than 12 inches, too short for good cable management?

What length are the wires? The wires to the switch look less than 12 inches, too short for good cable management?

Approximately 19cm. So it would be a tight fit to get both the switch cables and the mainboard cables to reach the both ends of the case. I can try and find out if I can get custom cables made with longer wires. One alternative is to use the PSON header but that would require custom cables.

I think I would personally cut the wires and solder an extension.

This is pretty neat! I have one of those cable solutions from eBay with the in-line resistor but those are no longer available. This is much better and takes up less space!

I love the look of this project as a complete solution 😀

If I can improve this design, what should I add, include or change?

There are some things I'd love to see from one of these projects:
1. An on/off button solution to handle the momentary switch of ATX cases to operate as a latching button, like this 16-bit backplane does, or with an attiny85 or something.
2. Some way to plug directly into the AT power connectors, I'm thinking there must be some way to do this with spring contacts and a 3d printed housing on the end, otherwise it needs extra ATX to AT adapter cables to connect into an AT board.
3. Possibly an optional load for the 3.3v rail since the ebay adapters that were available previously did this so that the PSU can work optimally. That might be less necessary for more modern power supplies though, since 5v and 3.3v are usually just DC-DC step-down voltages rather than their own switch-mode rails.

Luckily even latest ATX standard still includes -12V in the specification, so with a linear regulator it can be used to generate -5V. I have not come across anything that actually uses -12V but perhaps that was a compromise from the body that designed the specification, to leave one negative rail in place for simple generation of other negative voltages, while freeing up the -5V pin for other use.

Here's another I just made.. you would just cut the ATX-to-AT adapter and solder this inline. Top is input from the ATX side, bottom is output to the AT side. Then just put some heat shrink over the whole thing. 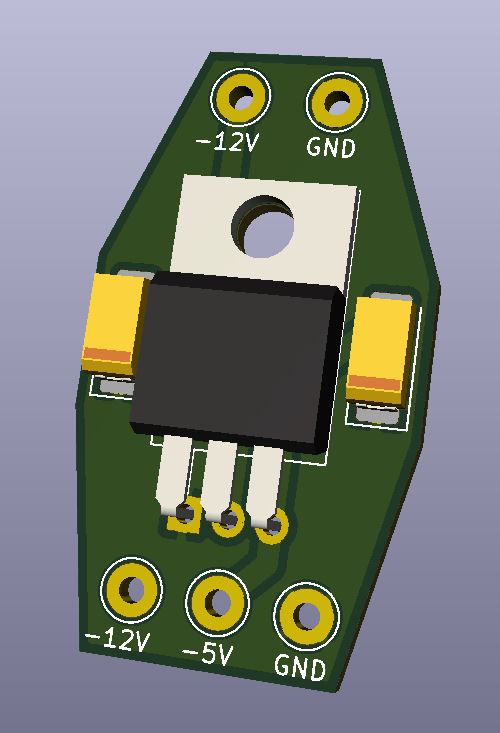 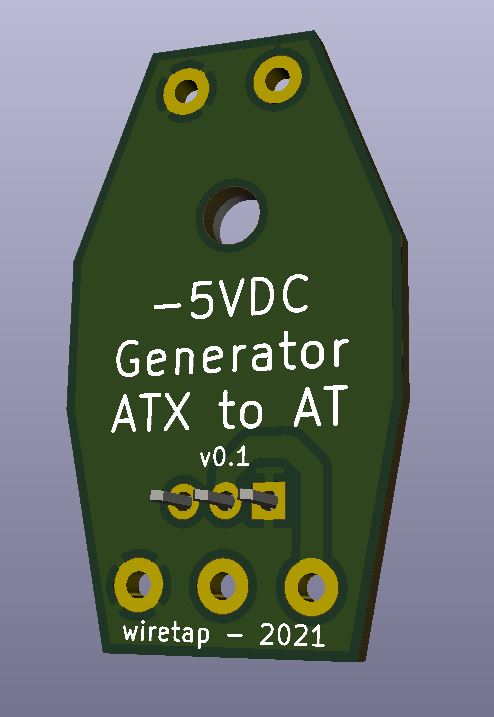 A bit off topic, but I think another kind of adapter should exist for PSUs (and that would probably require more work) : some way to adapt modern PSUs that are 12V oriented to something 5V oriented. By that I mean taking some part of the +12v rail and beefing up the +5v rail for socket A systems that need it

That's a lot more current than the conversion happening here.

But it may be something that needs to happen eventually. There's currently a movement to switch over to 12V only PSUs which moves the voltage conversion on the MB. In practice, 5V is really all that's needed to give you Molex and SATA power connectors for drives and other peripherals. SATA does have a 3.3V pin but that's really mostly used in enterprise drives for drive parking and hot-swapping. People who shelled external WD "white" label drives ran into issues if their PSU provided 3.3V on the SATA cable as the drive wouldn't spin up.

So you could have it take the unused 12V CPU PSU cable and have it output just 5V and ground. Then have that run to a passthrough 24 pin ATX connector which doesn't pass the 5V pins, the 5V would come completely off the converter with the normal PSU's 5V going only to the peripheral plugs.

You could supply an additional 5V/10A from the 12V output with a circuit like this (just erase the transformer/rectifier section:

Would 10A cut it if you were to completely replace the 5V of the ATX MB connector? A problem with modern PSUs is having 16A or so 5V rails, while 30A+ is recommended.

You would run it in parallel. If you needed more current, you could add another TIP2955. 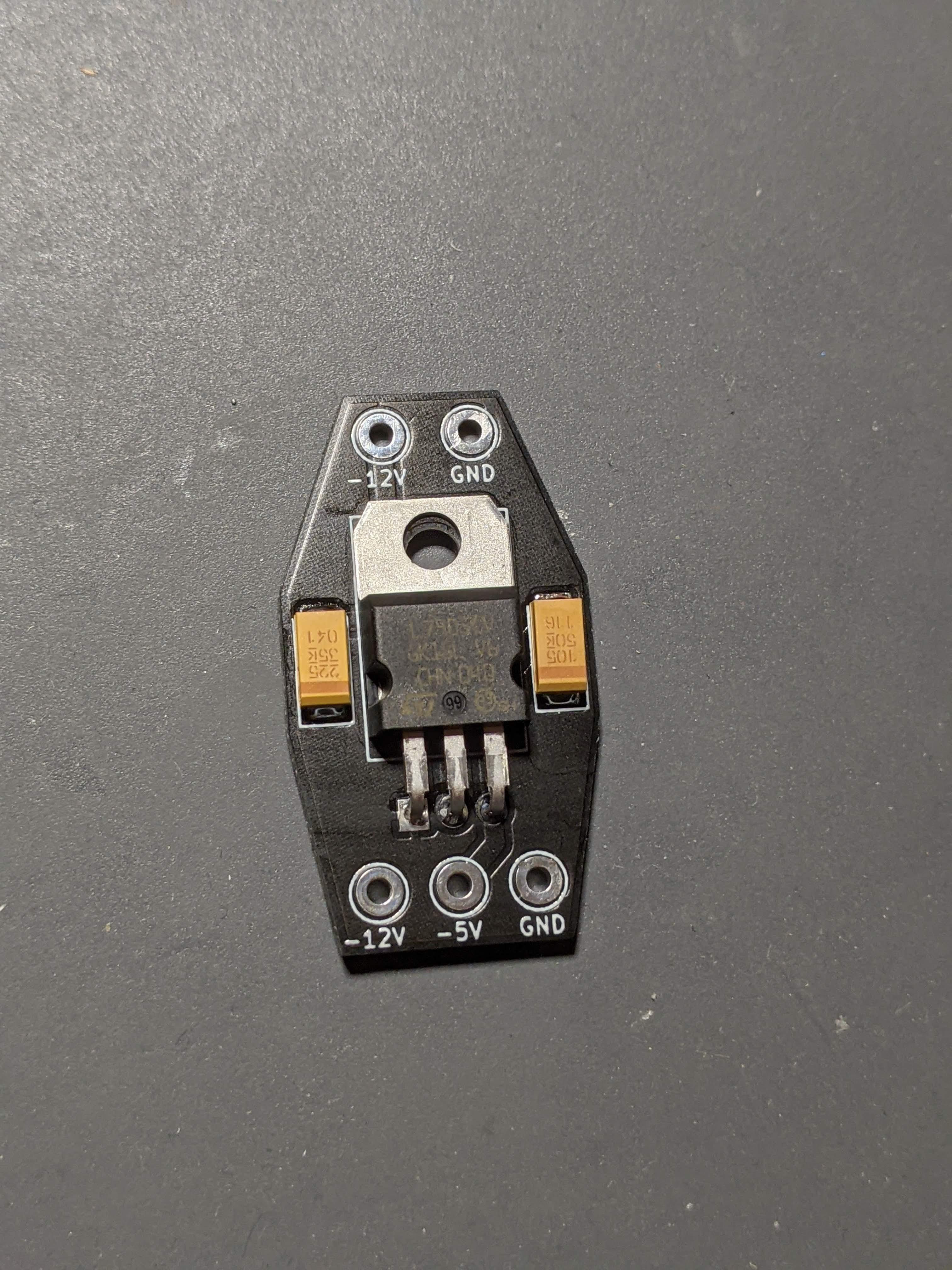 Installed in the ATX to AT adapter (wire colors of the chinesium cable aren't right): 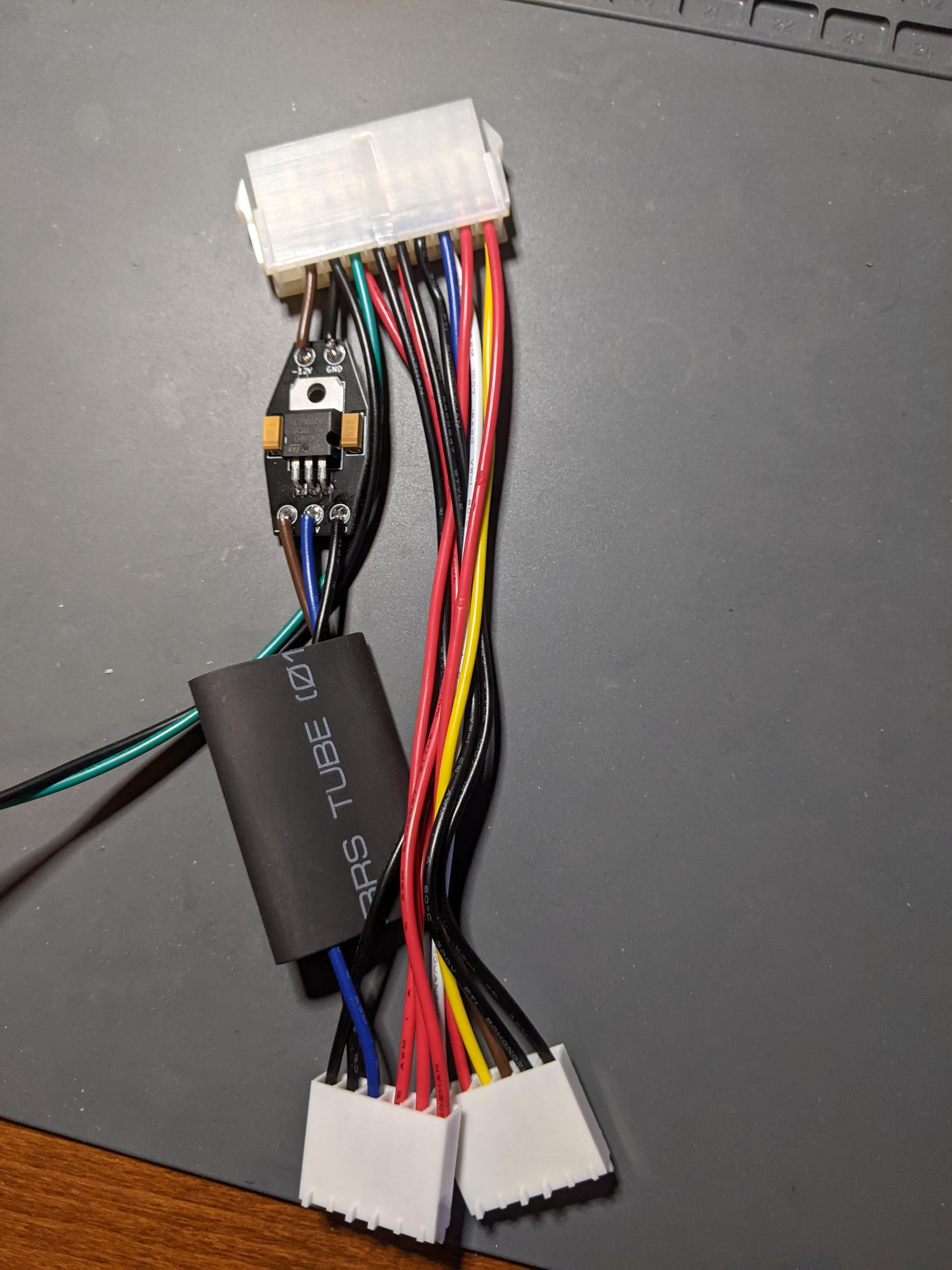 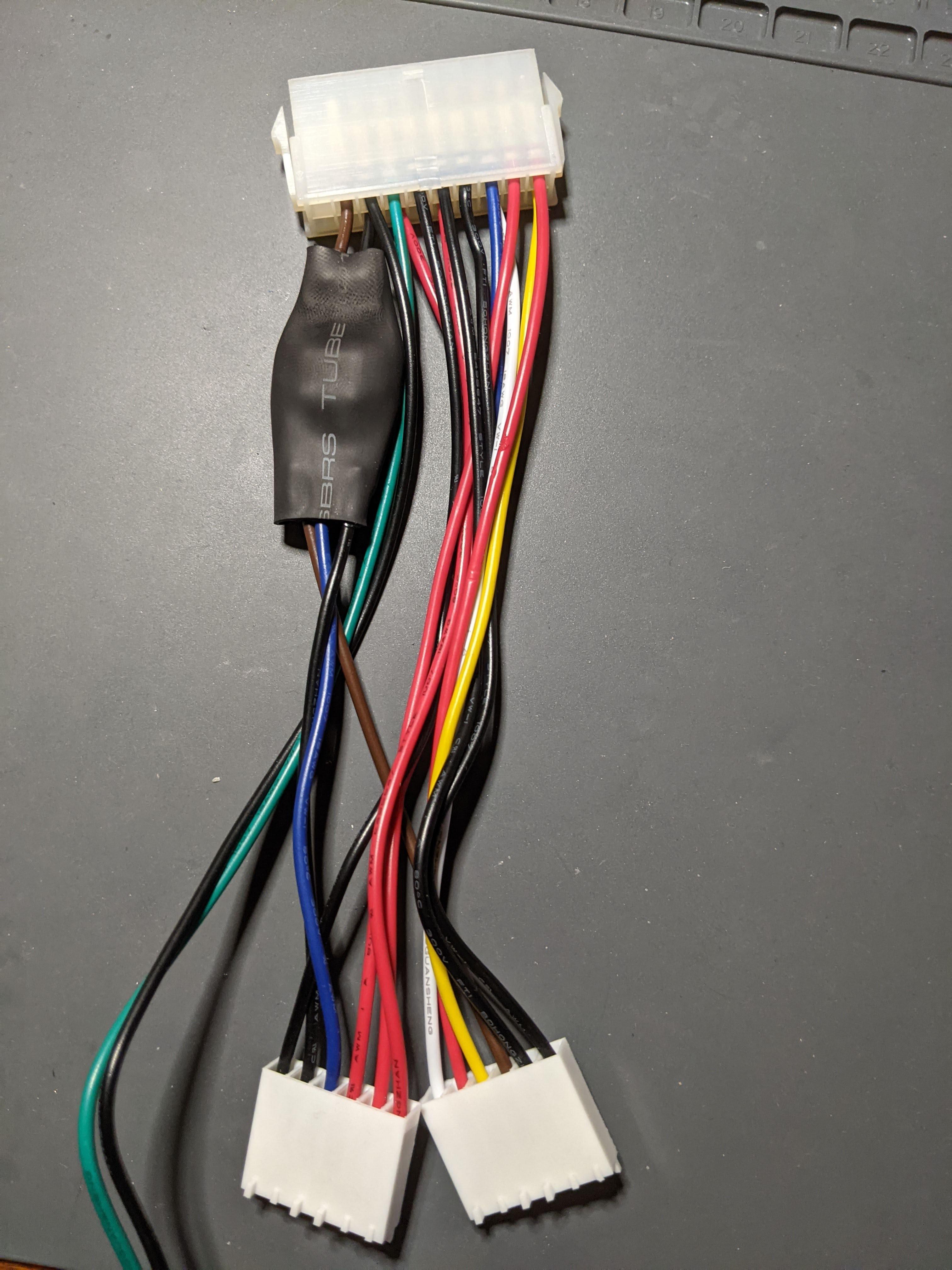