Between 1992-1995 IBMs were a serious ripoff. They still pretended their machines were relevant and charged twice as the competition for basically the same thing.

Goodness only 50%. From previous posts by other members here you would've thought 486s were dropped as soon as the P60s were released 1993.

No kidding. Nobody really bought Pentiums until 1995. Only organisations and uninformed rich jerks bought Socket4 before the P54C came out. I remember 1995 as the year that normies started buying DX2-66 in volume. The 486 was definitely still a thing 1995. Windows 95 effectively killed off the 486. It was one of the first must have software that made the 486 feel like a slow piece of shit. I switched back to 3.x and tried to ignore it, but that became hard when the industry focused on software for 95 and eventually gave up on 3.x. Windows 95 was only really okay on a DX4 or 5x86 if you had 16MB of RAM. I know some people claim that a DX-33 with 8MB is good enough, but those people are masochists.

What I really like about these IBM PS/1’s are the install of DOS and Win3x and the IBM menus, apps, and recovery tools.
They provide allot of tools and batch files for restoring the PS/1 back to default.
Allot of easy configuration tools too.
Kind of like a Mac in how easy it is to configure and learn with the programs and tools IBM provided in the default setup.

All PC’s running DOS / Win3x should have had a menu system like this.
It makes learning and running DOS/Win3x really easy.

Quite few of the bigger OEMs system set ups were similar, having 3rd party tools as well as tutorials included in the default installation.. Maybe that could be another thread on it's own. Amstrad for example shipped systems in 1990 with Counterpoint.

It had a tutorial built in and dos utility assistace

Compaq shipped TabWorks with their systems. HP had a very nice nice Dos menu with tutorial included. Windows really didn't be come relevant in the market place until 3.0 was shipped. Then 3.1 bundled with systems. Though Zenith supported MS with the project from the early days.

And of course prior to 1990 IBM/MS were pushing MCA and OS/2 as a replacement for Dos. Most of the industry ignored them apart from implementing vga. MS didn't want to continue the 286 OS/2 support which IBM wouldn't agree to and the the famous lovers break up. IBM saw their error and released the PS/1 and PS/ValuePoint lines to grab back some of the market share.

What is the best way to shut down this computer becasue it just goes in a loop.
The IBM menu system makes this computer just go in a loop.
When in Win3.1 I can exit to IBM DOS menu and then exit to command line DOS.
But the power button will NOT work then. It just exits DOS back to Win3x.

So what is the best way to shut down this computer?
Did IBM provide a solution for this ?

I have an original IBM installation of DOS 6.21 and Win3.1

Push the POWER button. Front lower right colored WHITE. You know that BIG switch. Press IN for start and you will see some pretty lights. Press IN again for stop the pretty lights will go out.

I thought I should post a link to my other posts listing the different models of the IBM PS/1.

Actually, I have a IBM PS/1 Multimedia edition. It must have been one of the first generation but it does not have VLB it is all ISA.
And it came with a Intel 486dx2-50mhz CPU and Sound Blaster 1740 sound card and 2x Panasonic CDROM drive.
8kb cache and 8mb ram.

So most of the IBM PS/1 computers from 1993 and 1994 are basically the same. Being with the onboard Intel 486sx-25 CPU
You can upgrade the CPU, RAM, Cache, and add a Sound Blaster card.

The 1994 Multimedia edition may have 32bit bus IDE controller. I am not sure.

But I think they where very under powered to have been a good performance multimedia computer.

CPU and Cache jumper settings. Video ram and onboard video.

So I will be testing this computer to see which works bests.
It is getting harder to find these 169 pin Intel over drive CPUs.

I just picked up a 33mhz bus Intel over drive CPU that I will test out.
These 169-pin CPU are getting hard to find.

CPU upgrade info:
Check the hardware manual for your motherboard type because there were many IBM PS/1 versions produced and
It all depended on where you purchased the PS/1 they all had a different version of motherboard.
This was a marketing scheme by IBM.

hey, i have the same motherboard as you have made in the UK here are pictures of mine, but on the manual and on the motherboard, there is no sign of a 33mhz jumper.
are you sure there is one? can you show me where it is? 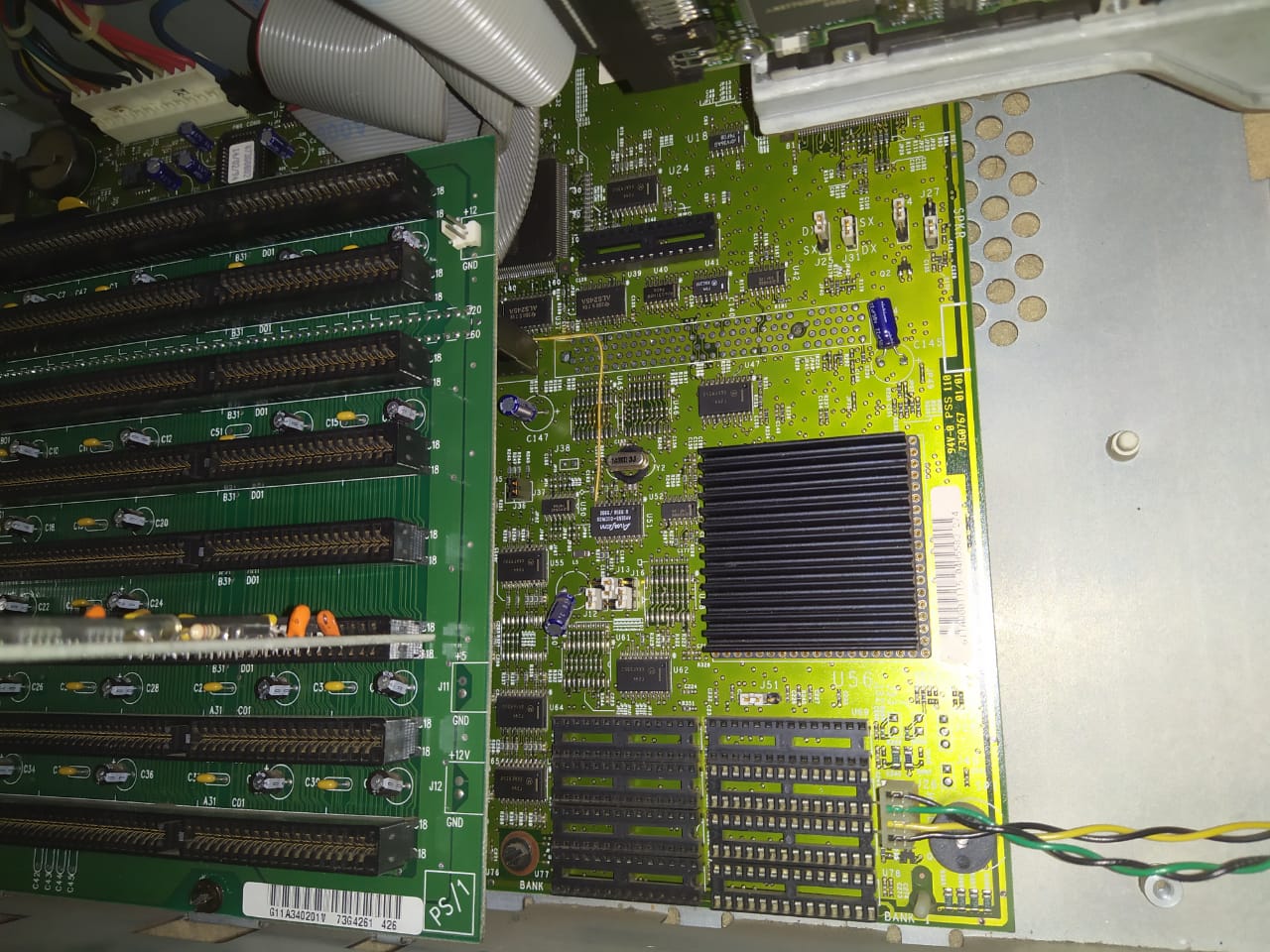 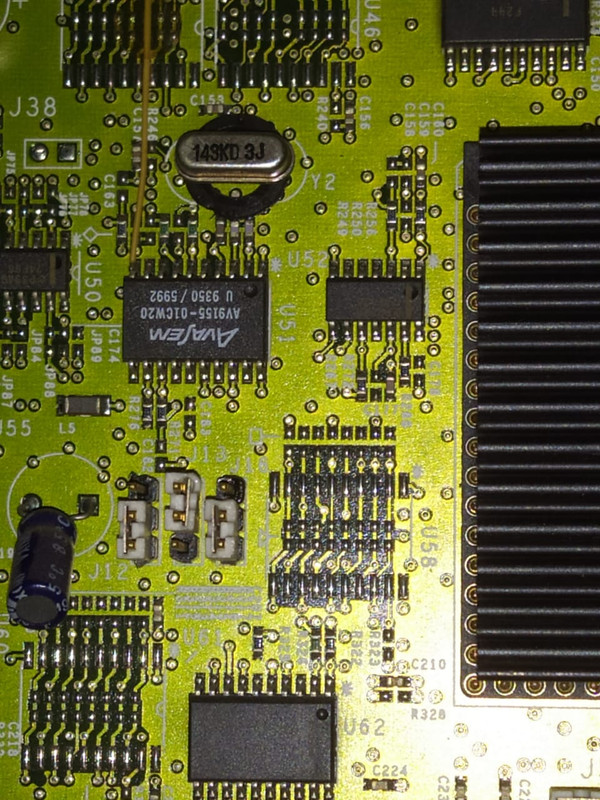 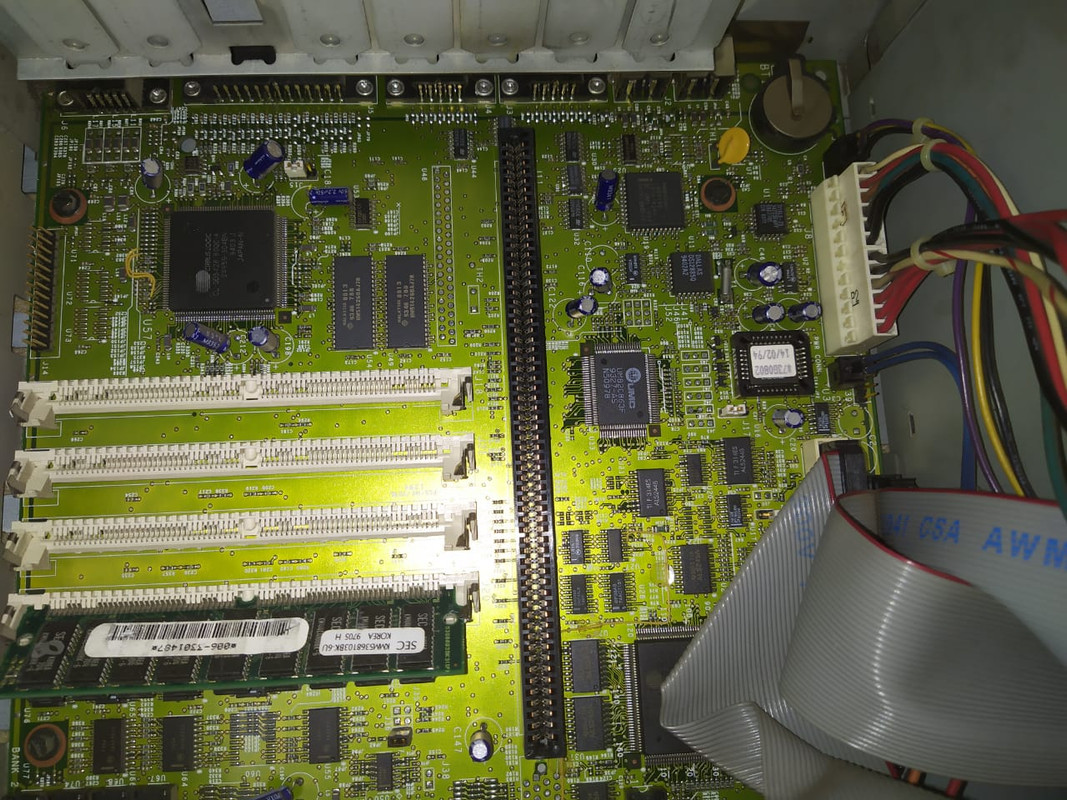 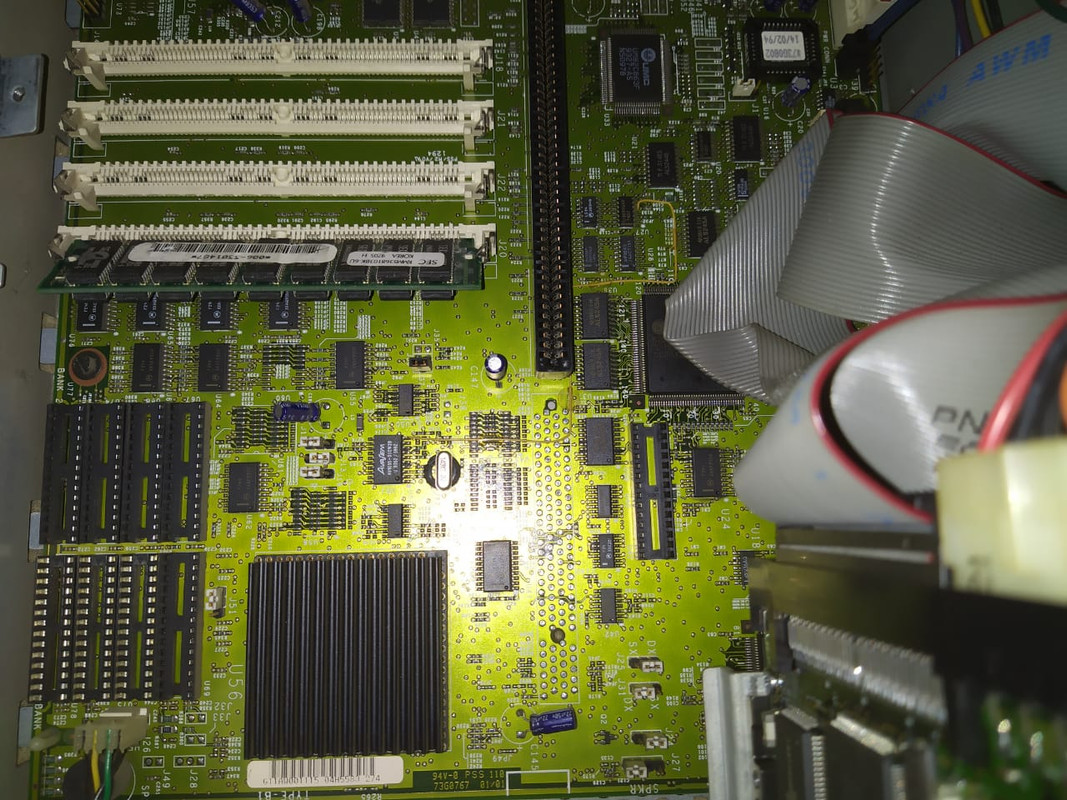 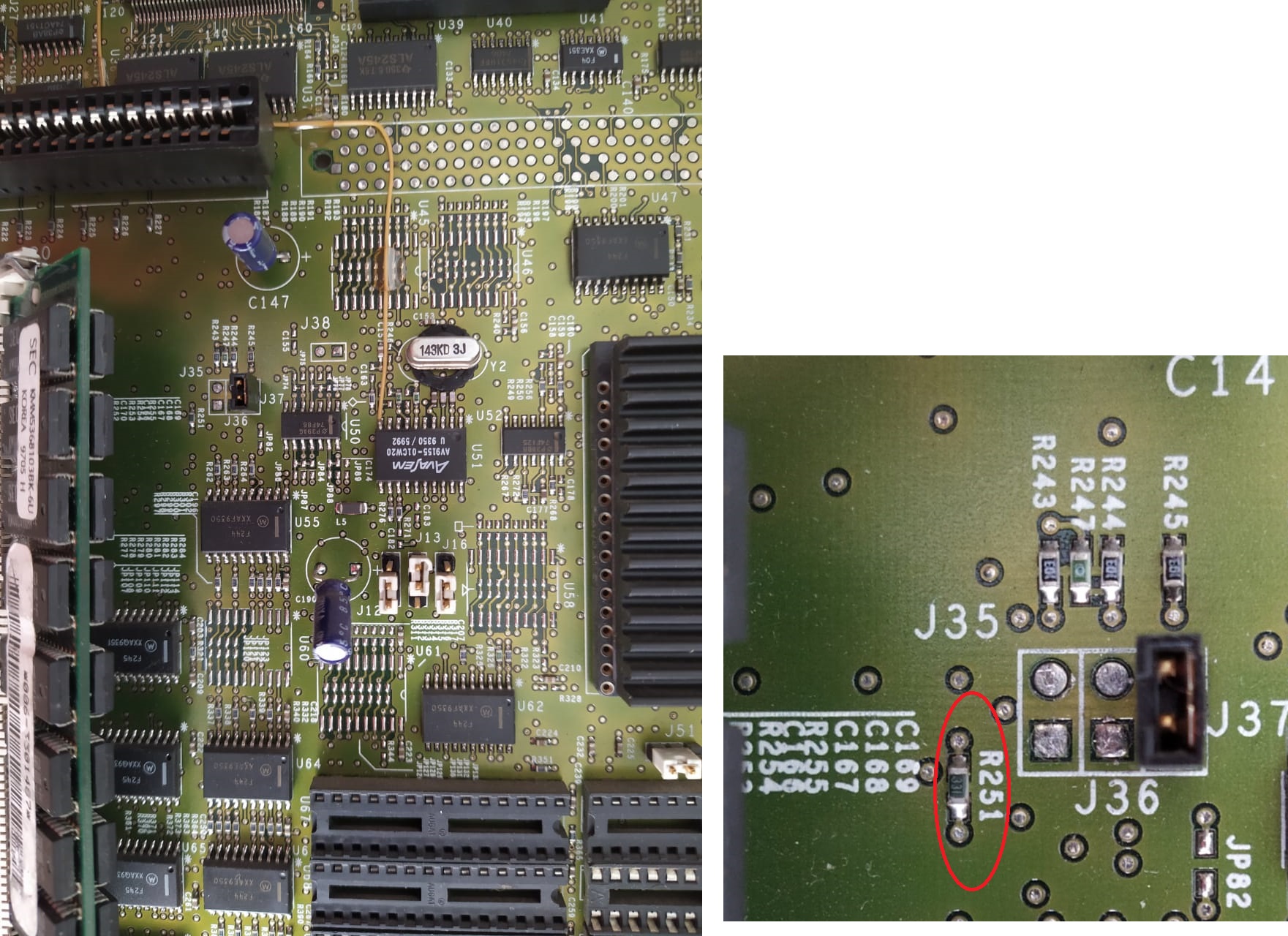 See my posts above with the manual white pages.
It shows the jumper settings for 486dx2.
Use that jumper setting for 33mhz. CPU
Or maybe it was the Pentium overdrive CPU setting.

You need to switch the jumpers for 286kb of cache too when used.

Then search the internet for that model type manual.

interesting , in the manual you posted today that motherboard model from our pictures is not included in the manual designs.
but if you say that setting the board jumpers to overdrive...will also work with a dx2 66mhz and a transposer i might give it a try.

strange, it kind of looks the same as the picture you posted some time ago, did you take this photo? 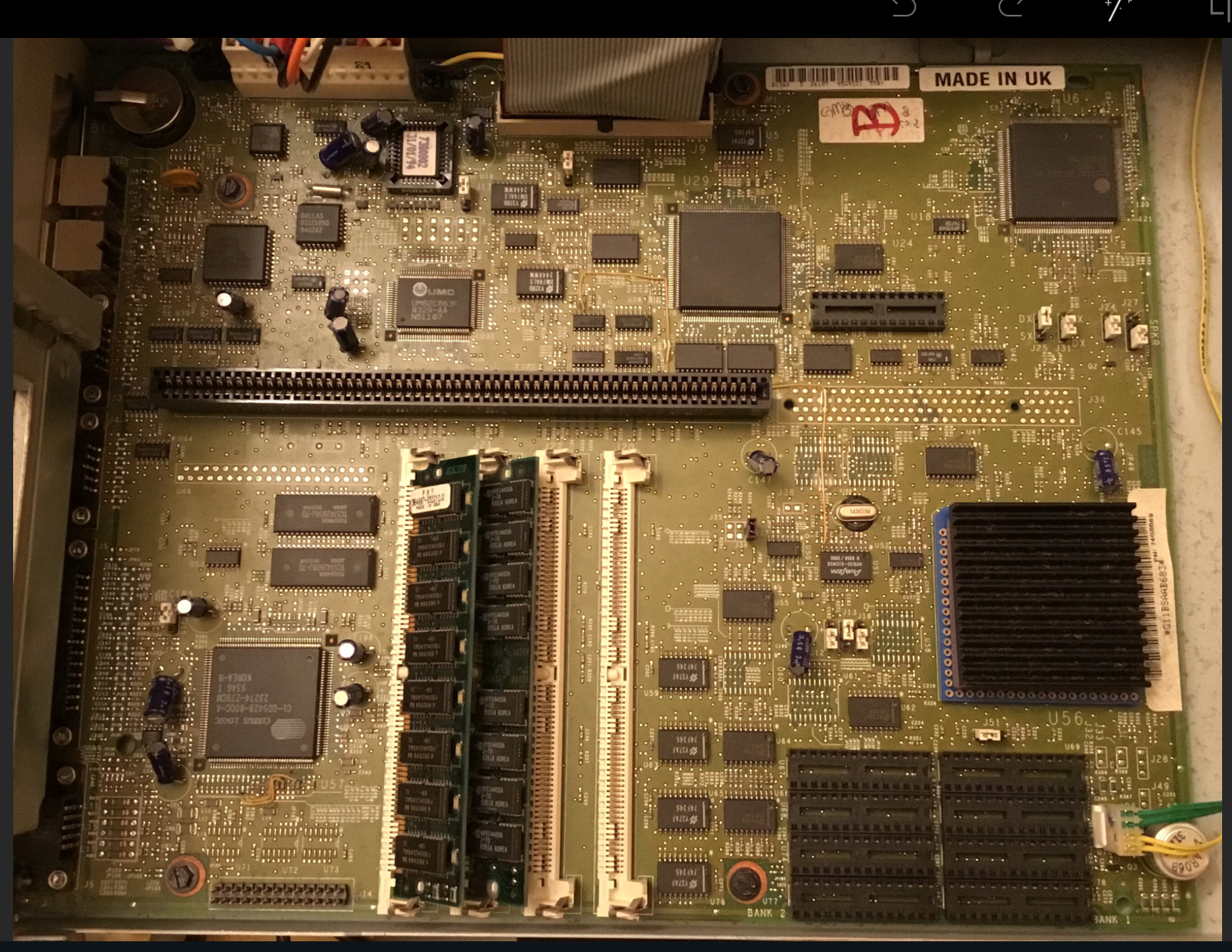 Yes, it looks the same.
Then it should work.
For a 33mhz BUS CPU try the “Pentium OPD” jumper setting
I have the computer stored away in my garage or I would check.

In the photo above that is a standard intel 486dx-50 CPU
The jumper are set for that and NO Cache.

interesting , in the manual you posted today that motherboard model from our pictures is not included in the manual designs.
but if you say that setting the board jumpers to overdrive...will also work with a dx2 66mhz and a transposer i might give it a try.