-Start Edit- You can download the 2 versions of superpi I used in my 3rd post!!-End Edit-

Some time ago I had this 'contest' with a friend of mine about who has the most computational power in the house.

The challenge: Could I build enough old singlecore systems to beat my friends new Intel Quadcore?

During the course of several months I build computers from parts I had laying around and ran superpi on every one of them.
Many of these systems didn't even have a case and were put together with parts I wouldn't think of everyday use.

In the end this challenge also did provide me with a small but interesting database of how fast a certain processor could do calculations.
I chose superpi as it's benchmarking and results are pretty straightforward.

I didn't use any optimised versions of superpi as these would taint the results. I wanted to have an untainted database.
Also superpi is able to run on anything that has windows 95 and newer. The only problem was finding a superpi that calculated in factions of seconds and could run on any windows. As this proved to be impossible I used a modded version of superpi for any windows prior to 2k and XP which did calculate fractions of a second.

I did try googling up results for older and newer systems but most of these used many different hardware and software, many of them overclocked and thus useless to me.

On all the systems I build I used the 1M calculation
Calc/s is calculations per second (1M is 1 million calculations)
Score is the calculation time inversed, then multiplied by a million
(Calculating a score makes so you can add up scores to see how fast all computers are compared to a single modern system)
Because I have so many results (and I'm dead tired as I'm writing this) I formatted the results in this way:

Intel Tetrium ($$$mhz), motherboard and OS used (along with additional info if applicable)
$$$$$s [=Superpi 1M calculation in seconds] (calculations per mhz), score:"the score" calculated by inverting $$$$$s and then multiplying by a million (=1000000 😁 )

I know it looks messy, I'll inprove the formatting tomorrow when I'm not as tired and I know some results are missing, mostly different cpu's used on my GA-5AX

If anyone else can be arsed to run superpi on their retro computer(s), please post your serults in this thread so we can start comparing some data!

Some interesting notes about these results:

The Palomino 2000+ scores lower then the Palomino 1800+ even though they both use the same ASUS A7V133.
This might be because the 2000+ uses normal PC133 whilst the 1800+ uses PC133 cl2.
Seems higher bandwidth will improve performance of these processors
This seems to be confirmed by the Thunderbird 1000 C having a slightly better score then the Thunderbird 1000 B

The P6 celerons seem to have about 70% the computational strength of their respective bigger P3 brothers.

I did the same (testing cl3 and cl2) with the Katmai 550 (later replaced with a coppermine), I tested first some PC100 cl3 and then the exact same configuration at cl2. Didn't make a significant difference.

To my surprise the K6-3 400 scored a little better then the Celeron 400 even though the K6-3 is supposed to have a crappy FPU.

Overall the 64 bit Athlons score about 25% higher then their equally fast XP's.

And my badly configured 486 seemed to score WAY lower then I had anticipated. It would be interesting to get more results of this generation of processors.
As I was testing without a mouse (for some reason it wouldn't work anymore after having moved) and having to do all the windows functions with the keybaord I just couldn't be bothered to try other configurations

I'd love to join, but where does one obtain the same version of Super PI you used?

I could either upload them somewhere. I remember for XP I used the superpi mod 1.5 version.
The 9x version I used is the only version I found that gives results in fractions of a second.

And the more benchmark results the better 😁

Edit:Uploaded them to here, these are the ones I use.

There is a small bug in the 9x version though. After having run for the 1st time, it will crash the system after it has written the result to the result-file.
After reboot it will have written the data to the file and superpi will work perfectly fine afterwards.
It will NOT crash if theres already a superpi benchmark result written to the result-file.

What I do is this: I run superpi 32k on some random system, save the result (yes it will crash the 1st time) and after reboot, I distribute the calculated result with superpi to any other computer and just ignore the 32k result from the other computer. NO CRASHES 😀

A friend of mine has the exact same cpu and I benchmarked it. His time was 21,86 seconds so yours is a little bit speedier 😁

I got my GA-5AX results coming up, will edit this post

Edit: I tested a couple different cpu's on my GA-5AX super 7 board. OS is Windows ME

The Cyrix at the same frequency is about 19% slower then a K6-3 and about 13% slower then a P1mmx.
You can clearly see it's FPU is somewhat lacking. I tend to just ignore their PR rating but I'm pretty much expecting their integer performance to be relatively better.

Increasing the fsb for the P1mmx from 66 to 100 and lowering the multi to x2.5 will result in a slight overclock of 7% while superpi performance jumps up by 21%.
Strangely letting the K6-3 go from 233mhz to 250mhz yielded a performance increase of 26%! Quite strange imo, the 256kb cache should normally compensate somewhat for the lower fsb

Problem is, I don't have Win9x installed on this machine. Perhaps I'll have time to do it tomorrow. I have to fix this machine anyways, just found out that the L2 cache is unstable at 40 MHz and high temperatures...

Forgive me for this worthless remark, but I'd love to contribute to this interesting thread, and also to post much more on Vogons, but I don't have access to my retro hardware at the moment as I'm "out of town", and probably won't for some time. 🙁
So, to Tetrium and all other Vogons retro enthusiasts - keep up the excellent work and valuable comments. 😀

I think the Mod Version requires a Pentium for the MSR Timer.

And Retro PCs may not have the required memory for the dataset, so you would bench more or less HDD performance. 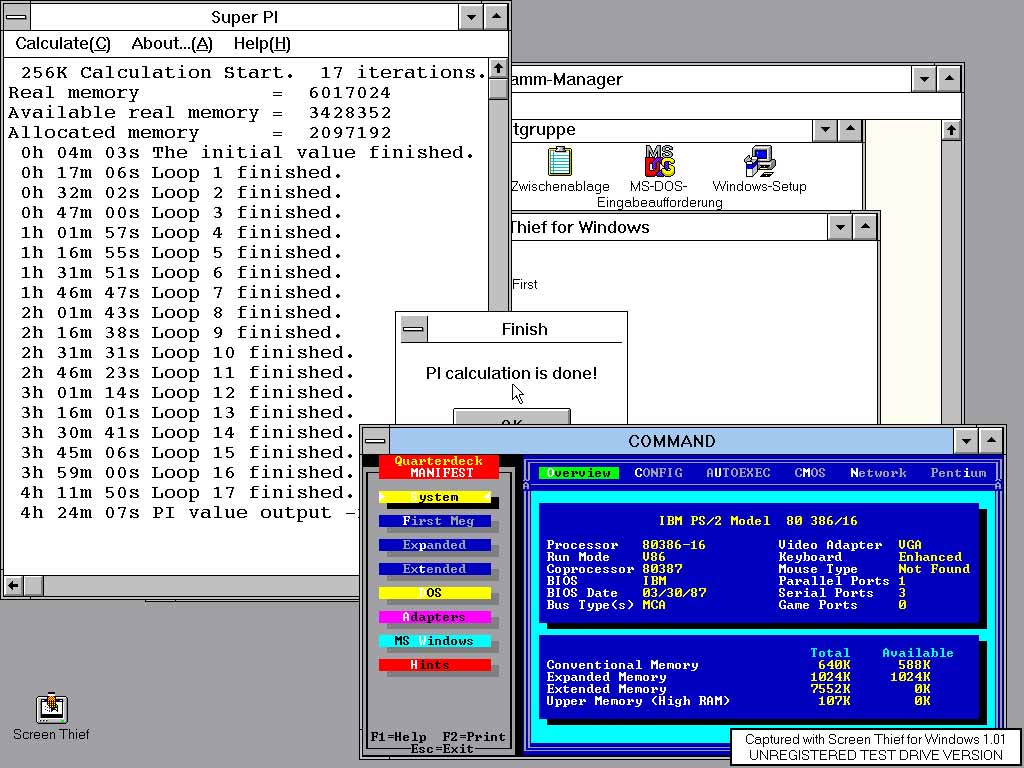 You ran superpi on windows 3?? Didn't know that was possible.

harddrive may influence results on systems with little ram. One more reason for me to test all 4 16k, 64k, 256k and 1M.

Original SuperPi runs on Windows 3. The screenshot shows Windows 3.11 for Workgroups.
The usual modded version were changed that they do not run anymore on Win 3.x. This is a real drawback for benching older systems.

Though optimal would be a DOS version utilizing Unrealmode for larger sets, that can be run from the commandline.

Though back to the known version. SuperPi has no check if its dataset is completely in memory and not swapped out. As you see on the screenshot, if I would double it to 512K set, it would be beyond the free Real memory, resulting in swapping. So 512K and 1M would give results with no FPU performance representation on this machine.

So back to the old systems:
You probably know that Win98 requires a 486DX (FPU included). Win95 runs on a 386 without FPU already, Win 3.x also.
So for programs that utilize the 80x87 and have no own x87-Emulation included these systems trap the x87 Code and redirect the execution to a emulation dll. This was a really common way. This means, that SuperPi, while benching mainly FPU performance runs also without a real FPU.
Though be aware that this takes much longer, maybe ~25 times longer as with f.e. a real 387.

I just wanted to add that the FPU used in the calculation was a 387, no 387DX.
If I apply the same recipe you used for the 1M calc, to this 256K calc I get a score of 63.1
It would be nice to have some systems with 1M and 256K calcs, as the 486DX4 to get some overlap. 1M calculations on slower systems would exceed any senseful timeframe.

One source has it that an Apple II takes 40 hours to calculate to 1000 decimal places. My current workstation takes 41 seconds to do 2 million places; or 3.3 seconds to do the 256,000 places it took elianda's 386 4.5 hours to complete. (And that's only using one of eight cores, as SuperPi is single-threaded.)

Could you please upload your version of superpi for us so we all are using the same versions?
Btw, would it be possible to make a win 3.1 bootdisk and run superpi from there? That could MASSIVELY ease benchmarking, we wouldn't need to install, or swap from another working system, windows everytime we might want to try something new.

For old slower systems I reckon running 256k or maybe just 64k or 16k would suffice. Using superpi to benchmark harddisk write performance is indeed a bad way to calculate FPU performance. I wouldn't have any problems with that.
asmof, I used 16k, 64k, 256k and 1M with all benchmarks that I've run. I only posted the 1M results here 😉

Edit: Here it is

Edit2:I just remembered another visual bug. In this pic you can see it, It counts the hours correctly but it forgets to detract 60 minutes for every hour it counts.
What I do it, I simply ignore the hours 😉

Nice formatting!
My 486 in seconds now:

The official superpi version can be grabbed here: ftp://pi.super-computing.org/pub/exec_windows/super_pi.zip
I think SuperPi requires Win32s in Win3.x.

Since numbers are hard to read for comparison, could you do some nice graphs?
You might have to scale the time axis logarithmically. Add the CPU/MHz shortcuts to the data points.
MATLAB, Octave or some similar program will do fine.

Frankly, I have no idea how to make nice little graphs, but it could help make it easier to compare results.
If you know how to make nice graphs, feel free to present us with a nice demonstration of what you have in mind 😀

I still haven't edited my OP yet, will do later tonight as right now I don't have the time.

Edit: I can't reach the superpi website for some reason, I'll look into that when I get back in a couple hours