So, a while ago, I was curious: Was there a better 2D card that I could pair with my Voodoo1 in my Pentium MMX 233 system? At the time, I had a Matrox Millennium alongside my Voodoo1, and knowing that Matrox made some of the best 2D cards of the day, I'd thought I'd try some other, later Matrox cards out and place them side-by-side in a benchmark comparison under DOS, using Philscomputerlab's DOS Becnhmark Pack to conduct the testing with.

For this experiment, the following testbench was used: 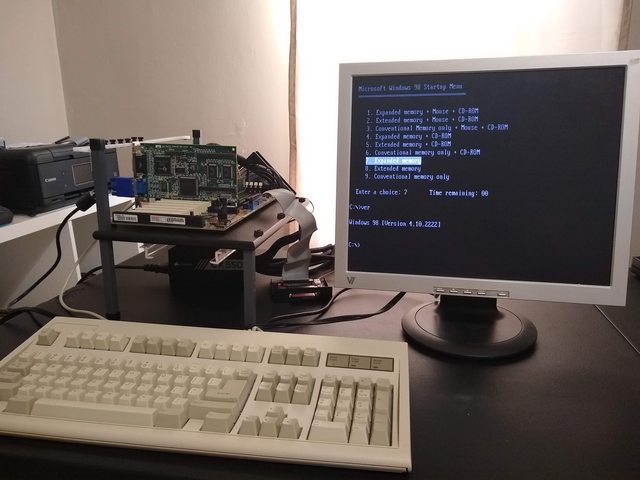 I tested a total of about 5 cards in various configurations: a Matrox Millennium 2MB (MGA-MIL/2N) & 4MB (MGA-MIL/4/DELL3) (w/ and w/o the SGRAM expansion board), a Mystique 4MB (MY220P/48I/20, a Millennium II 4MB(MIL2P/4C) (w/ and w/o the WRAM expansion board), and as a bonus a Diamond Multimedia 3dfx "Fusion" (?) Voodoo Banshee 16MB PCI (I have heard a lot about the Banshee's 2D capabilities, and if they were better than the Matrox cards tested, I would be willing to use it by itself in lieu of the previous Matrox + Voodoo1/2 solution).

Before I get into the results, if you would like to see photos of each card and some other photos, check out my Imgur gallery for this thread.

So, now without further ado, here are the results (you can find my Google Spreadsheet here):

One thing that struck me weird had to deal with the Millennium II. According to the VOGONS Wiki page for Matrox:

This chip is mysteriously similar to Mystique but it uses WRAM instead of SGRAM and this gives it higher high-resolution GUI performance. The 3D acceleration appears to be identical with even the same bugs.

However, on both of my Millennium IIs (I'd have to guess my second one is a bit older (MIL2P/4BC/20) because both the Texas Instruments "video" and MGA chip has lesser numbers on it; I know, 100% sound thinking), they both failed almost identically when it came to Chris's 3D Benchmark @ 640x480 (here's the card that I have shown the results for failing, and here's the other one failing). I doubt that my cards are defective - I instead believe it's a flaw with the design of the card's themselves. I have no definitive proof for this conclusion, but what I can say is that the Mystique provides similar performance to the Millennium II, and if the issue I had with my Millennium IIs is indicative with all MIIs, and the implications of this issue extend into other DOS graphical programs (e.g. video games), then I'd think the Mystique is a safer bet.

Maybe to no one's surprise, the Banshee, an outsider to this comparison, beat all of the Matrox cards, with noticeable margins in older 2D benchmarks. This confirms what others, Wikipedia, and VOGONS Wiki said regarding the 2D performance of the card.

In summary, it can be said that the memory expansion boards do nothing in terms of bolstering the performance of the Matrox cards, and that, in order of increasing 2D performance, Millennium < Mystique == Millennium II < Voodoo Banshee. Based on these results, I have actually went ahead and replaced the Millennium and Voodoo1 in my Pentium 1 system with my Banshee, due to its superior 2D performance and its better video quality (which is in part to its all-in-one nature). While I lose some early Glide compatibility, if need be I could always throw my Voodoo1 back in for the few DOS games I would encounter that would only run on a Voodoo1, but right now that's not a big concern. I'm just happy I can replace two cards with a more powerful one. 😁

On a final note, I'm actually willing to add more 2D cards to this set of test results if anyone shows great interest in doing so. It would be kind of cool to see a mega-comparison of various PCI 2D cards, wouldn't it?