Hello everyone, I'm experiencing a couple of issues (again) with the first computer I've ever had. Thing is that I started messing around with it, testing stuff like some spare hardware I had around my house and things like that; I'm kinda proud about my final build. However, the point is that from the very first tries the computer has had issues to cope up with the keyboard controller (i.e.: it would just shut it down or disconnect at random), after disassembling the whole case and reaching the motherboard, I ended up noticing it had corrosion around the area of the battery which didn't seem to have affected the solder joints around but did affect the internals of the keyboard connector (whose pins were messy and corroded). Today, I decided to go ahead and clean it up thoroughly using an old toothbrush which I embed into isopropyl alcohol, as I kept going, I remembered that my CMOS settings weren't being saved, and then also noticed corrosion around some diodes that protect the BIOS from putting the battery backwards, they weren't making any contact at all. As I kept looking around that area, I also found out corrosion around the fuses for the keyboard connector, which I ended up re-soldering as well.

I don't think any of these can cause the issue I'm currently experiencing, but what I had to do to be able to solder everything properly and clean it up, was to remove the RAM sticks; and I'm not entirely sure if they're supposed to have some kind of order or "priority" which I might be getting wrong, but the computer will now just boot up and do 3 (three) short beeps.

Here's a short video so that you can make up an idea:

Lastly, I'd like to provide some background about what kind of system are we talking about:

3 short beeps on an AMI BIOS says RAM problem.
They don't always make good contact when you install them.
Sometimes all you need to do is take them out and put them back in.
.
https://stason.org/TULARC/pc/motherboards/I/I … -386-M-321.html
https://www.lifewire.com/amibios-beep-codes-2624543
.

I can't see the motherboard itself and how you have your RAM installed so the video is rather useless.

A photo of the board would be a million times better.

Regardless, if you have the RAM installed on the upper memory bank, install them on the other one (i.e. lower 4 slots). As counterintuitive as it may sound, the lower 4 banks (closer to the chipset) are Bank 0 on these old 386 boards most of the time. It won't POST without RAM in Bank 0.

Also, you need to populate at least 4 memory slots for it to boot.

Thank you for replying. And yes, I kinda expected that it'd be a requirement to populate at least 4 slots, so I did. I'll share a couple of pictures below: 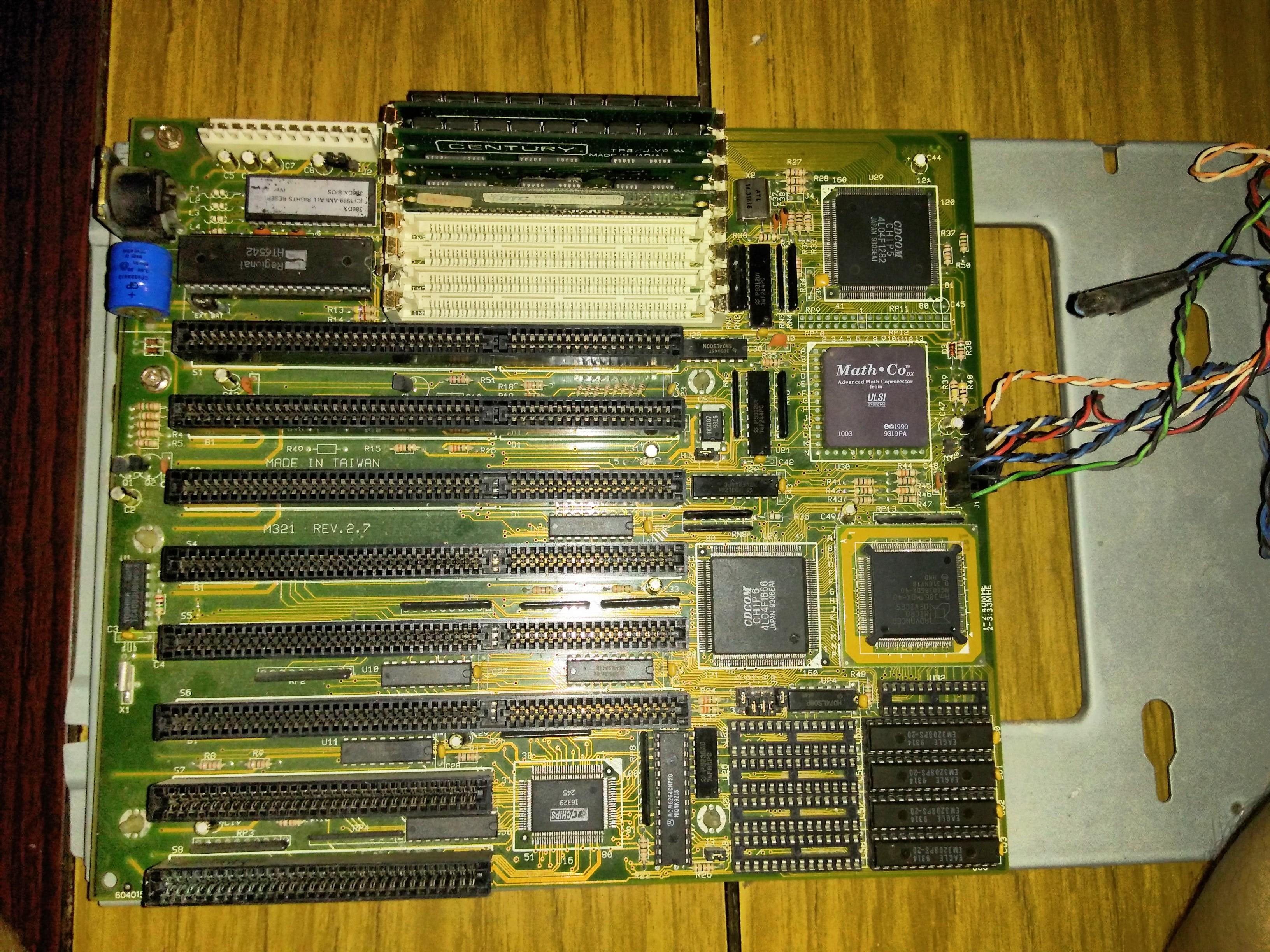 The motherboard, as I was testing it after re-populating the slots by myself. 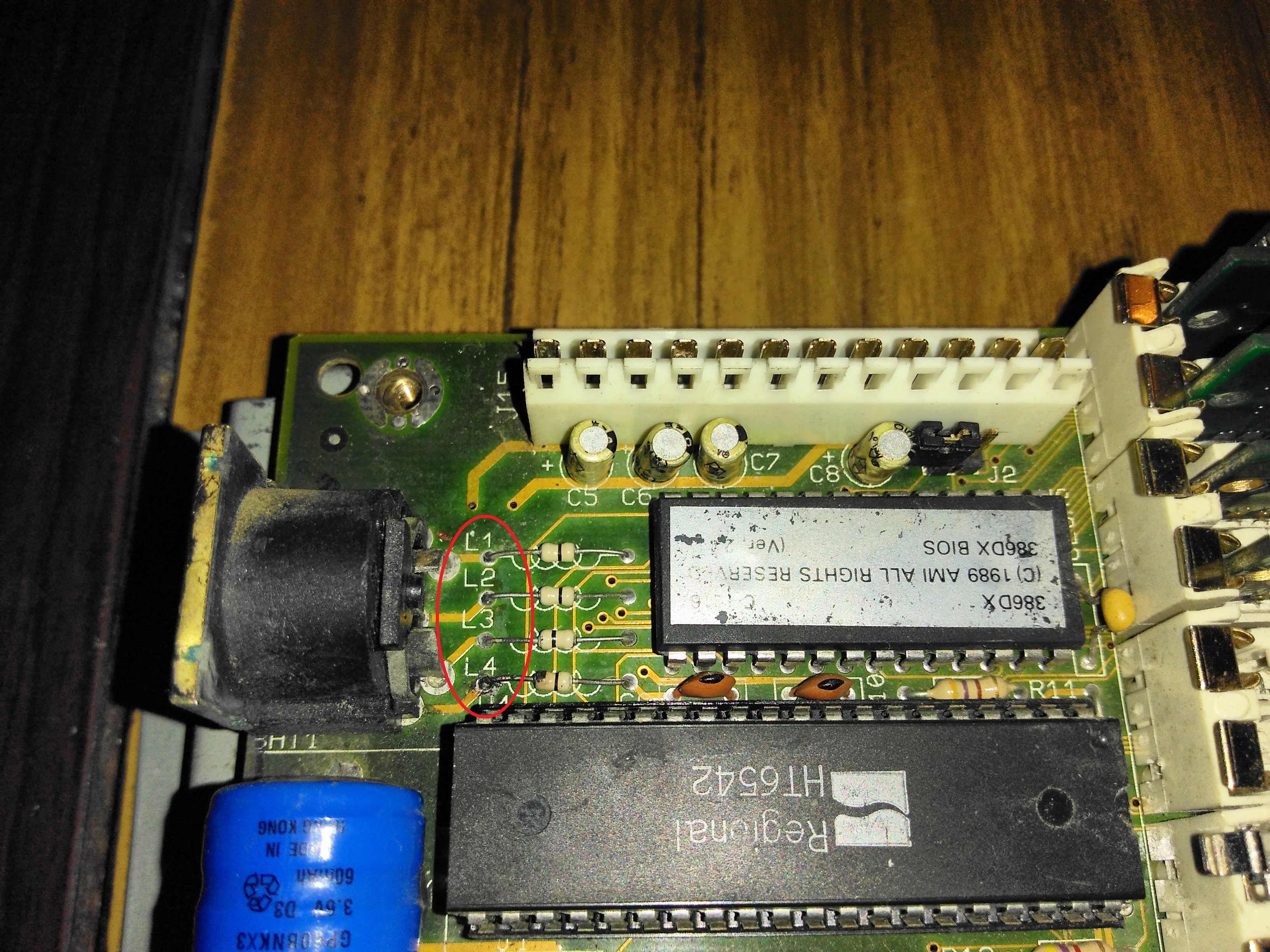 The spot that I re-soldered, only one of these resistors lost contact, but the others had more resistance than they should, so I re-soldered them anyways. 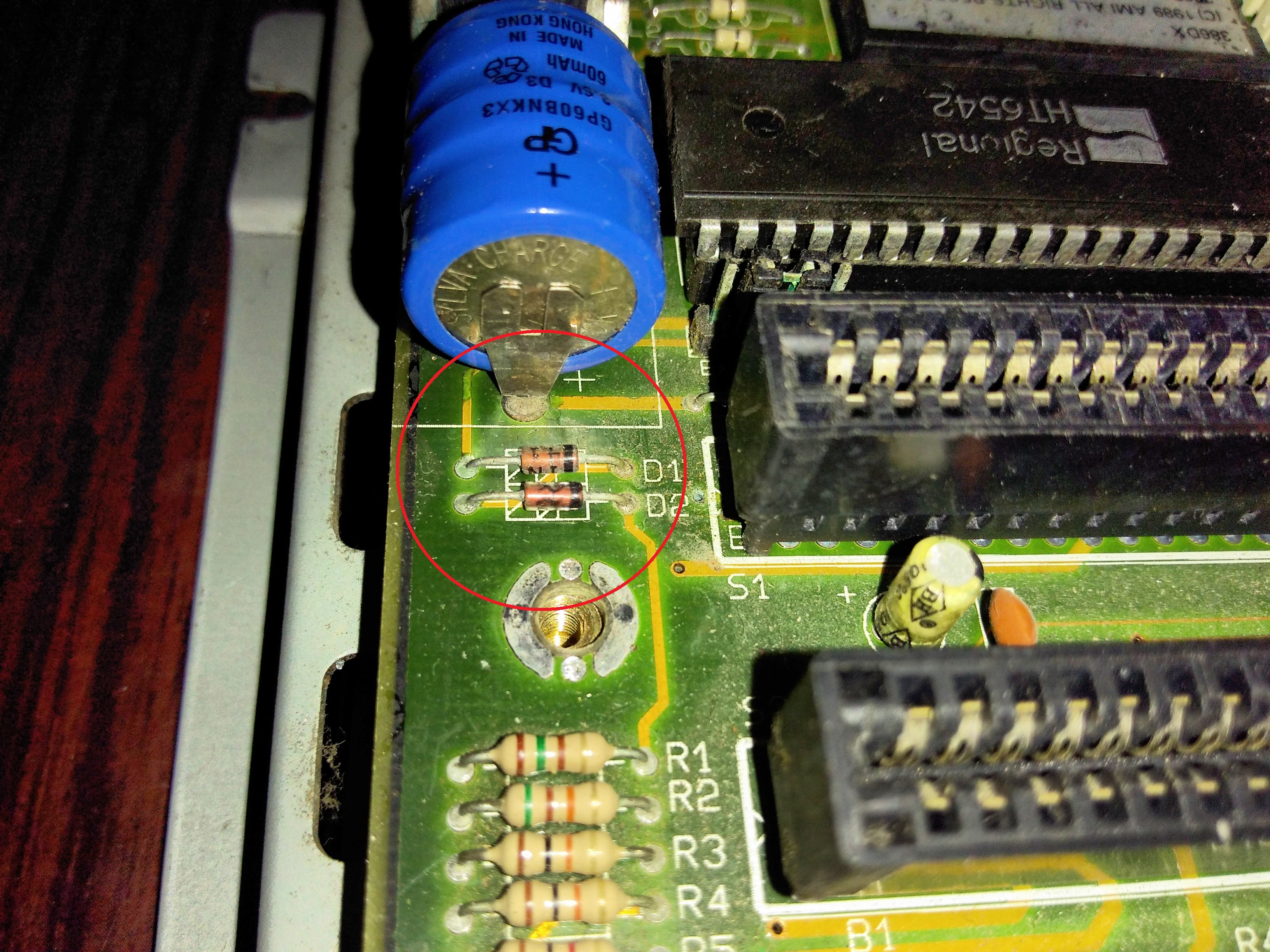 One of those diodes didn't even have a connection, so I re-soldered both. 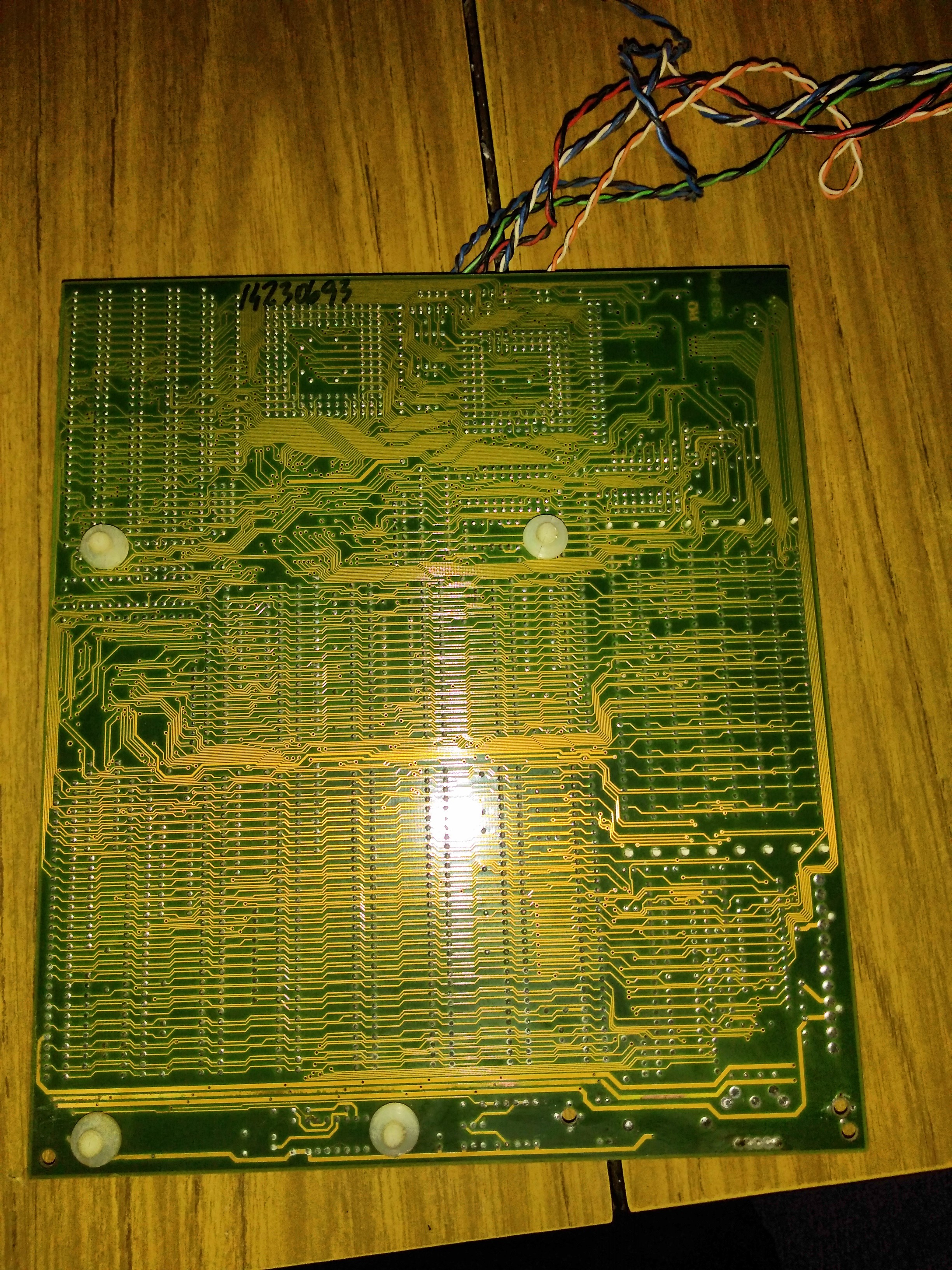 A look from the other side. 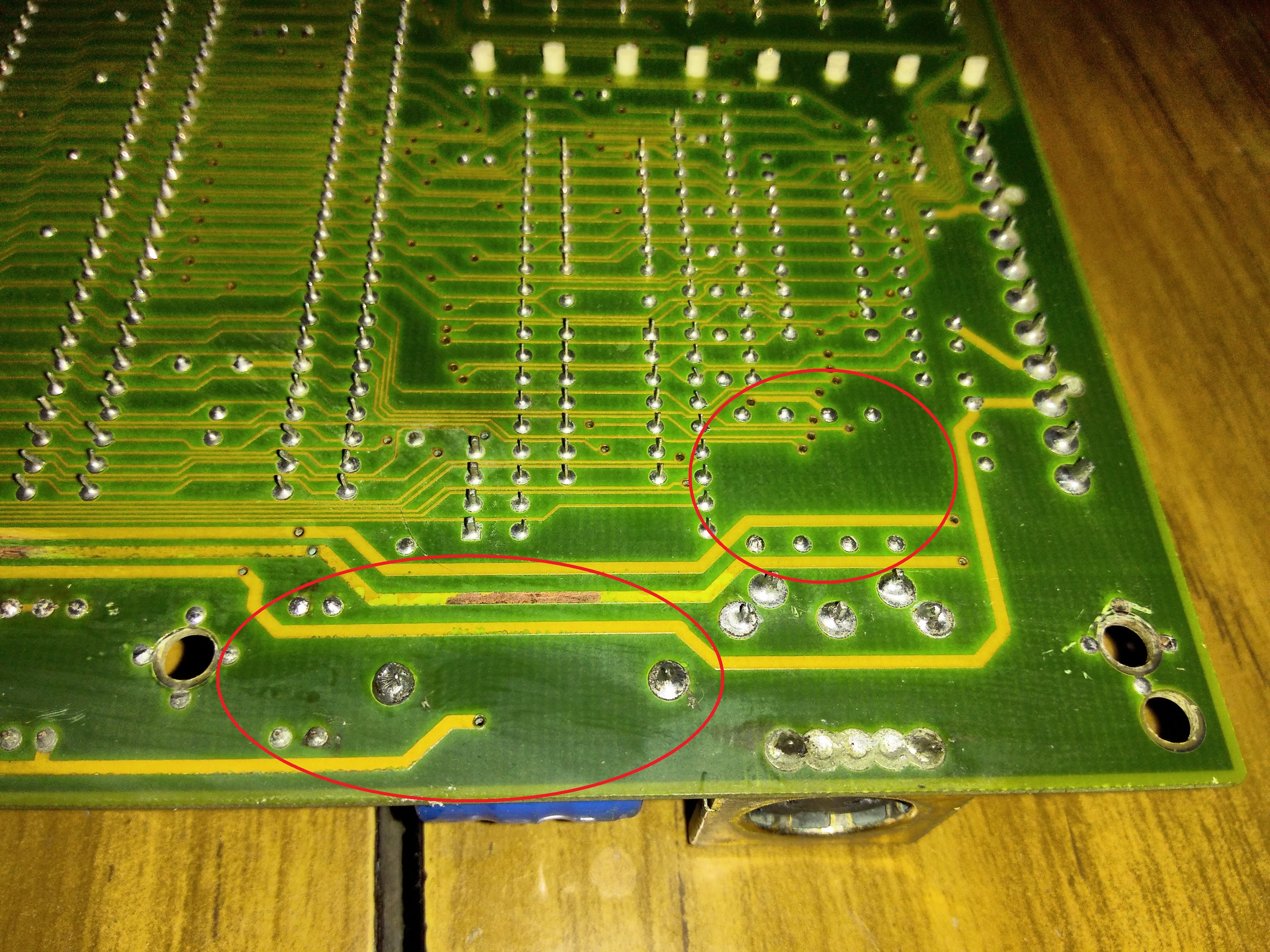 Spots I also re-soldered from the back (which have to do with the same resistors and diodes from the front, and the CMOS battery). 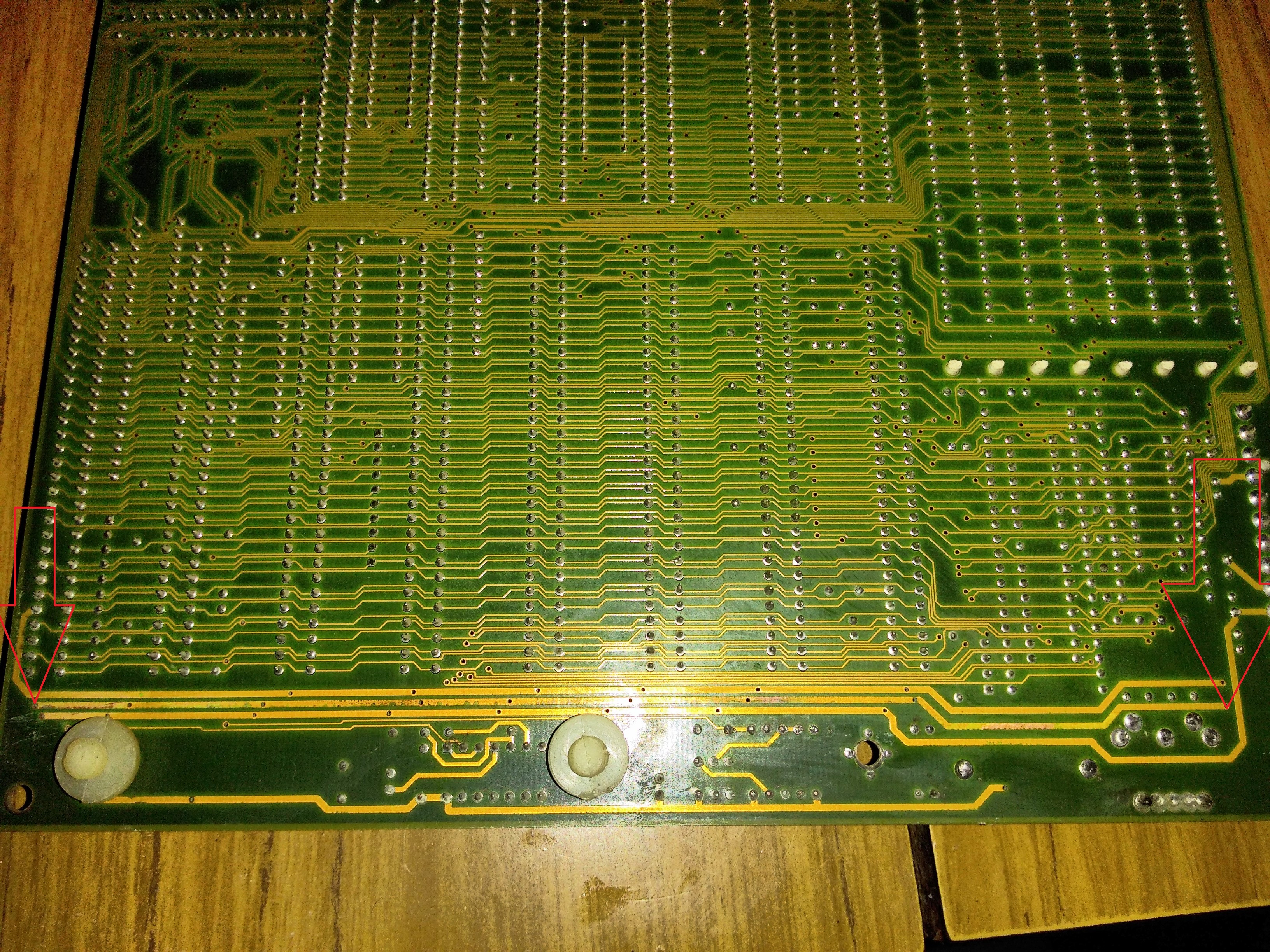 A messy corroded trace I examined which ended up having contact across the whole board, so I didn't do anything else to it. 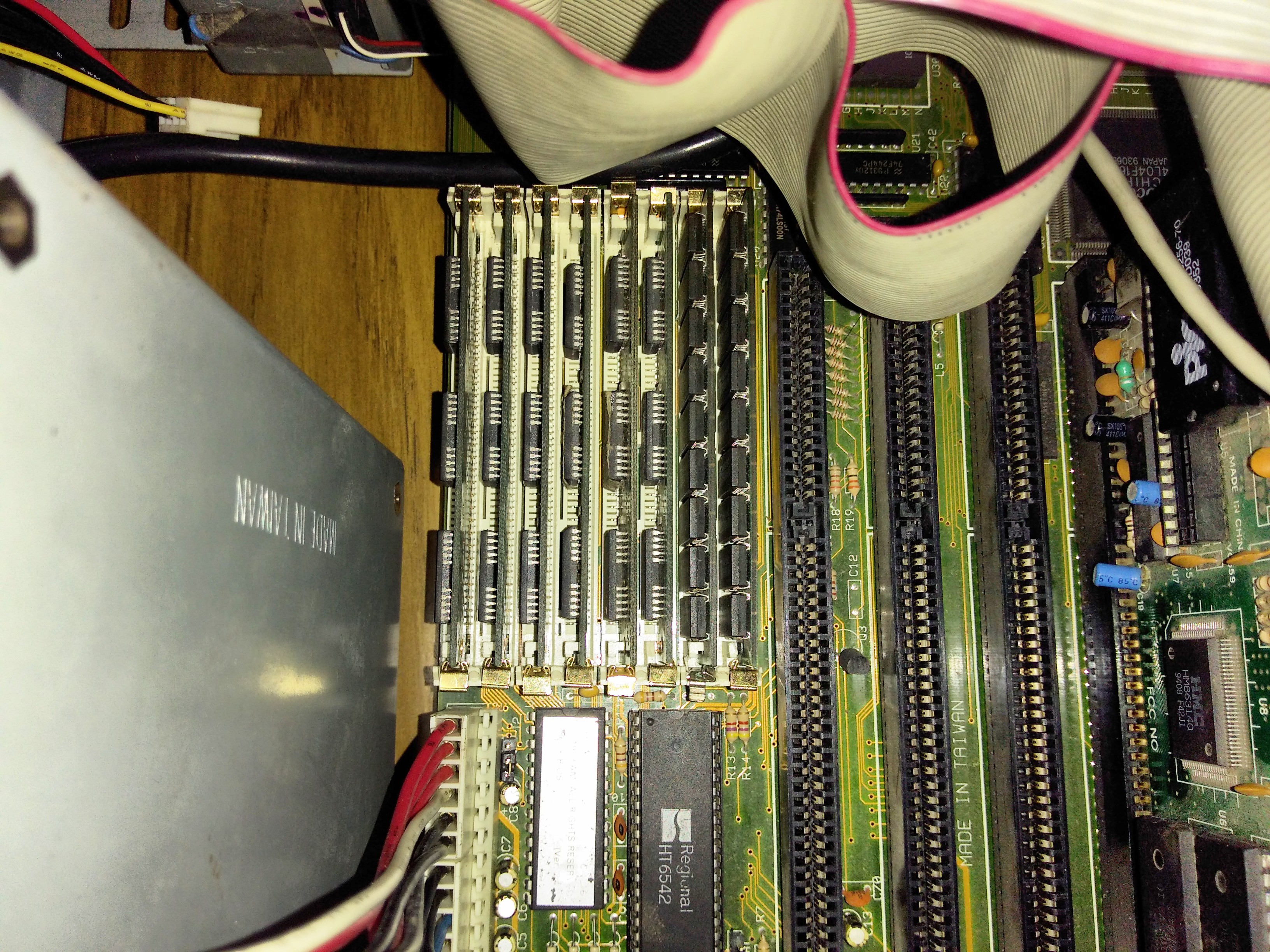 Populated slots for the final test, still no luck. 😒

And that's it, hope y'all can give me hand on this thing!

To me the RAM looks like it isn't properly seated in the slots.
Removing and replacing the sticks should have caught that.
.

I agree ! the first, third, fifth and seventh slots (starting from left) all look like RAM is not seated or inserted properly 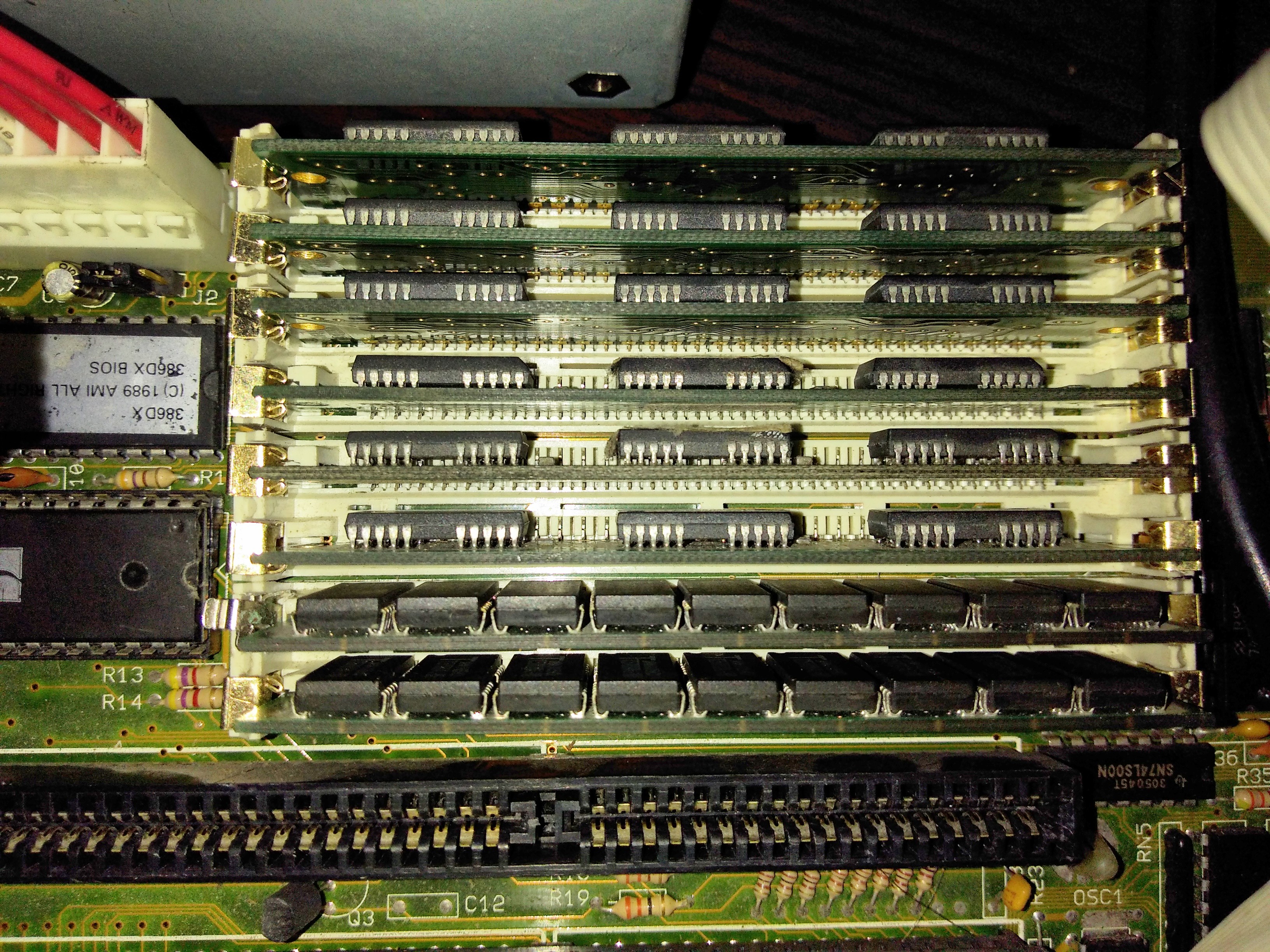 and clean the simm modules edge contacts with ISO Alcohol 99% and a paper towel.

Knew I forgot to point something out. I'm going to do that with my Slot 1 build and buy new caps, then do a recap in case my board still doesn't POST with RAM installed.

Alright guys, thanks for helping me with this issue. It turns out that I had killed one of the RAM banks (probably the whole bank, as they were still plugged in series while I was removing them) by touching them through ESD. I found a full bank of replacements (4 sticks) and also noticed that my mobo isn't such a common board, because bank 0 is actually the upper bank, as it won't boot only with the lower one installed (bank 1). Off that RAM I found, only two were in working condition, so I might actually have to swap them between the ones I had before, as two of them were giving me parity errors and causing the whole system to halt itself. However, as a side note, I'm glad that two of the working RAM sticks I found, have been made entirely on the US, so build quality is extremely higher, it also seems like the RAMs I had before were already experiencing issues so it's very likely that the silicon in them was highly deteriorated (had random crashes, lags and other kind of weird stuff like VRAM corruption and cache misses).

Here are some pictures of the machine actually working: 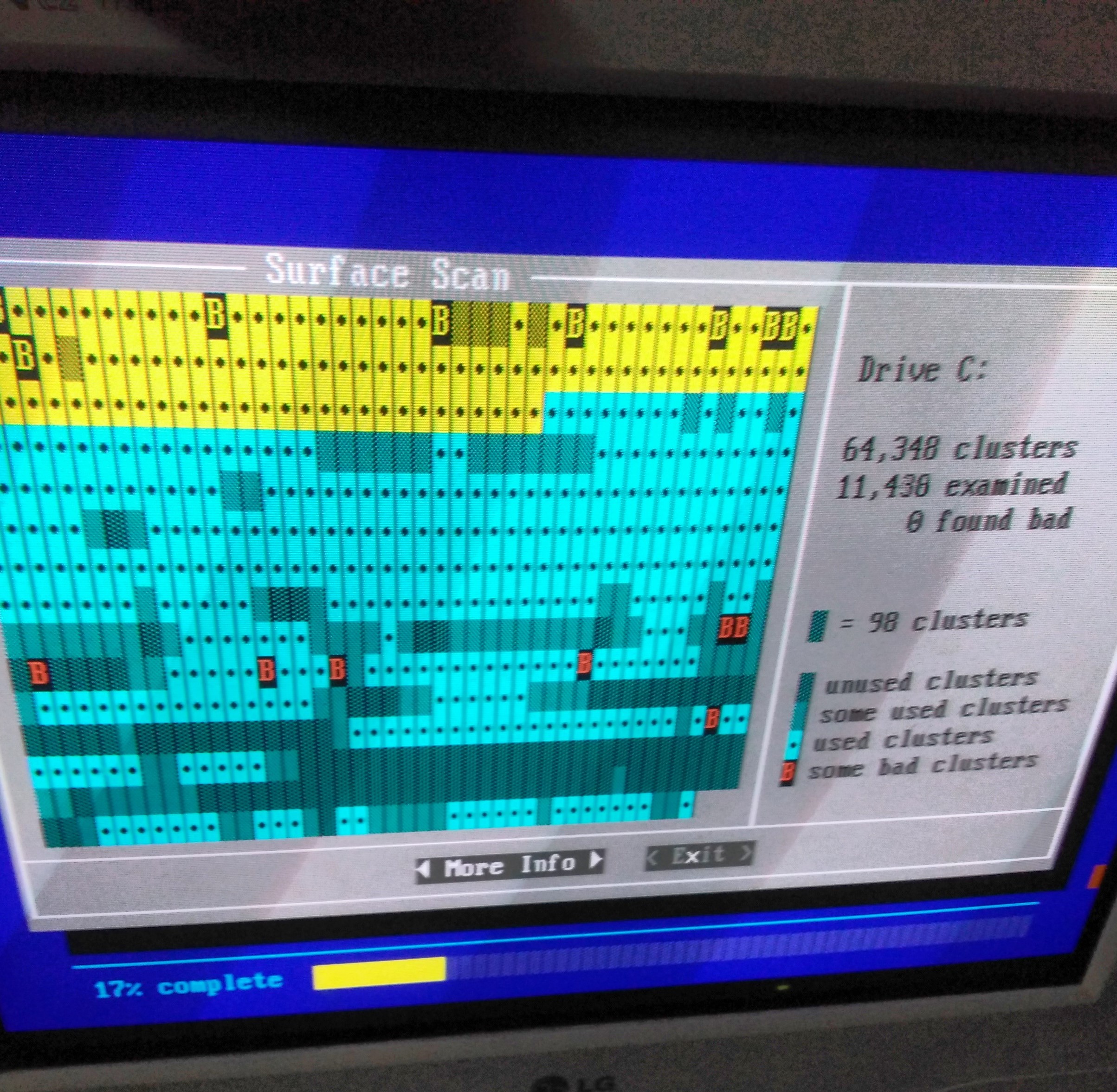 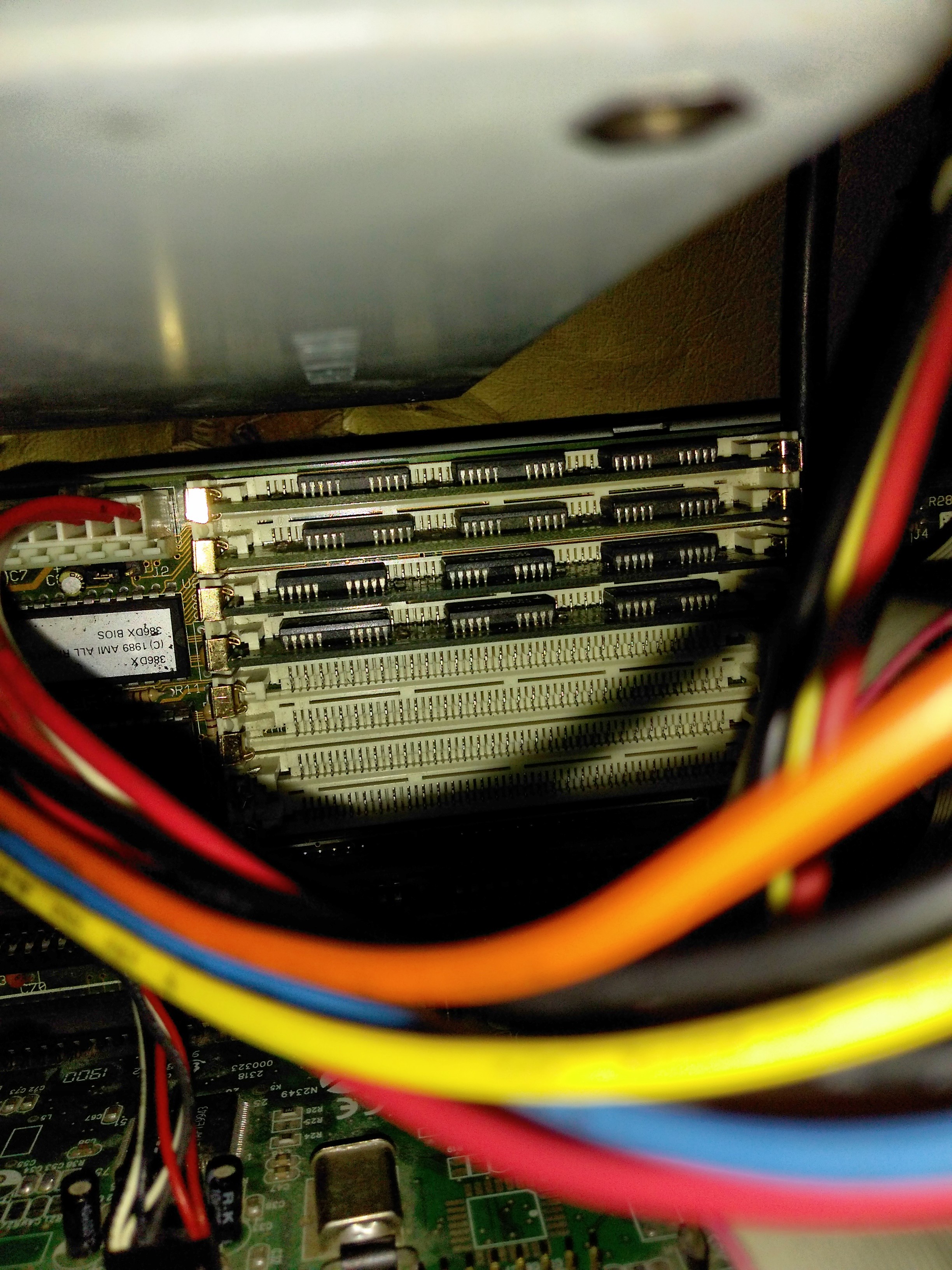 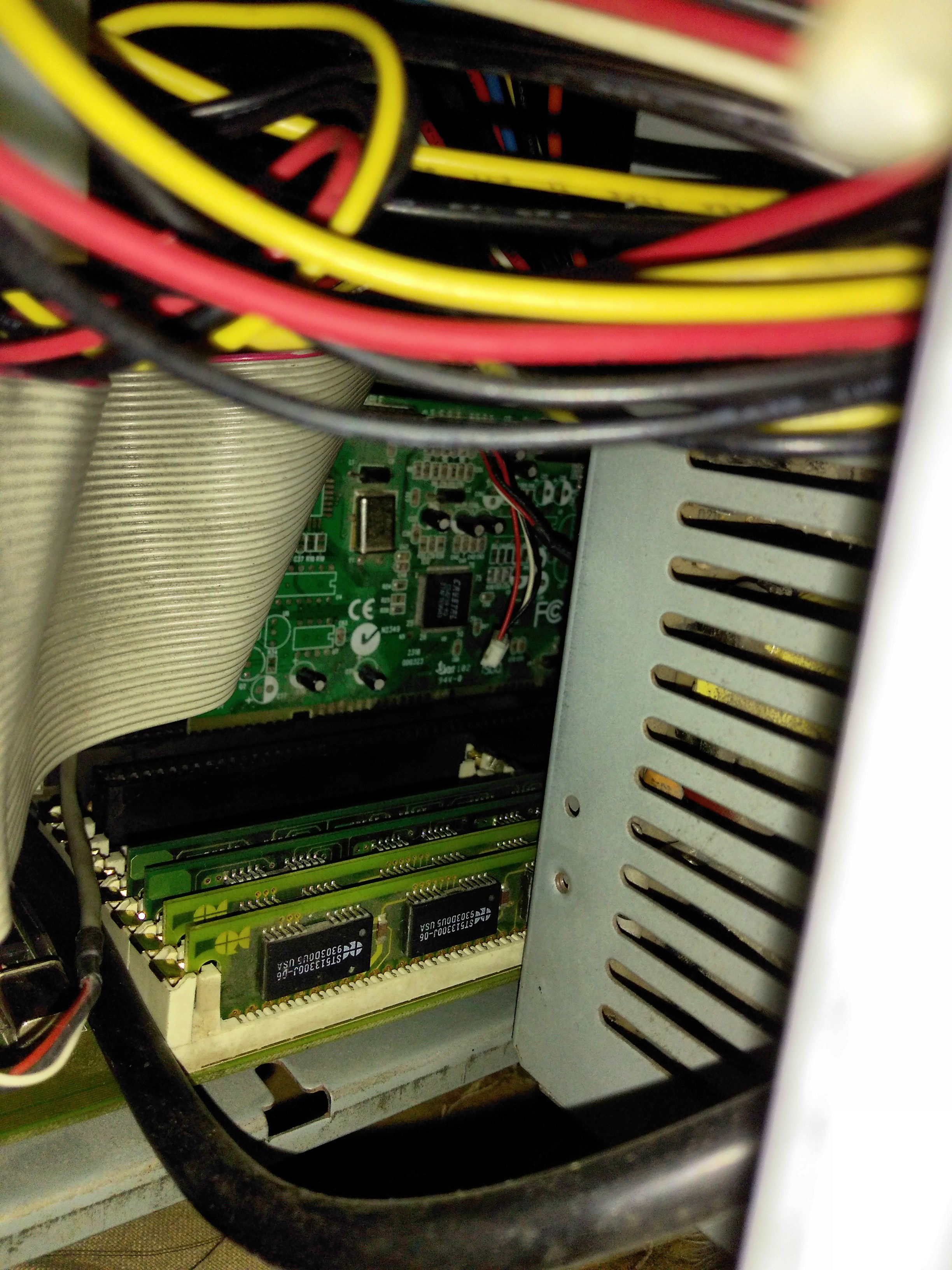 And yes, my repairs worked! CMOS settings aren't being lost anymore, the keyboard doesn't get disconnected at random, and the computer doesn't crash during heavy workloads.

Good Job ! That is a good looking little 386 board.