Hi,
It's my first message here, but I've been reading this forum for years.
I'm the author of two retro games for the zx spectrum: Misifu Remeow and MS Nampac.
I had a PC very late. It was a Packard Bell Multimedia Pentium 120 MHz. It was because my previous computer was a Mac 128k from 1984 (yes, it lasted too much as my home computer).

I find sometimes the fun not playing with games, but playing with the hardware itself. And my last challenge is to play these old dos games in my AMD.
My motherboard is an ASUS M4A77TO PRO, which as you could confirm it has a parallel port, serial port, IDE... so at first glance looks nice for DOS.

I first started by buying the OPL3LPT, which works GREAT. I played lot nice of games like commander keen, wolfstein, Duke Nukem II, ... The sound from this device is amazing!
Then I watched the PhilsComputerLab video about the ATI Rage PCI + ESS Solo1 sound card, which suposedly has a very nice support in DOS.

After disabling the LPT and ports, IRQ 5 is freed (confirmed using HWINFO utility), so I saw the Solo1 drivers took A220 I5 D1, in TDMA mode. 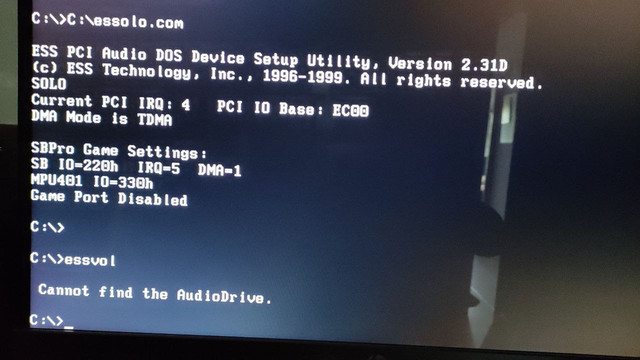 But, no way! There is no game that detects this driver, neither the card drivers itself (see image).

I also tried using PCISET utility, which I found it here in vogons with some parameters for this sound card to be properly initialized.

The sound card works perfectly over native Windows games. So if I play Doom for Windows, it has nice FX and Music. Old Duke3d windows ports also have FX and Music.
Windows does show a DOS compatibility driver with the parameters from the screenshot.
I tried a lot of different drivers and .ini files, but none of them worked. I even tried installing Windows 3.11 drivers, which allow us to configure these parameters manually, but again DOS fails, Windows works.

I guess it has something to do with my mainboard, but,
is there any hack (even to the bios) that might enable this sound card and work under DOS?

...
I guess it has something to do with my mainboard, but,
is there any hack (even to the bios) that might enable this sound card and work under DOS?

doh, lot of thanks!
At least I could use it for OPL3LPT (adlib games), and Windows games.