Chadti99, did you try using MODBIN to unhide any L1 settings? Could you provide a screenshot of the BIOS settings regarding cache? Could you remind me which BIOS and version you are using for the MS-4144? I recall there is an AMI and an AWARD option.

So you've tied the Quake 1 performance using MS-4144 against the LSD board? I guess I'll have to, at some point, test these out. pshipkov was kind enough to send me an Am5x86 that works at 180/200 MHz.

For whatever reason my 200Mhz capable 5x86 is limited to 50Mhz FSB for stability. I’d have to double check the numbers but from memory the MSI board is a bit quicker in some tests over the LSD, specifically Quake when using a 50MHz bus and 1024k cache.

For the bios, I’m using the Award bios that you modded for ps2 support with 2015 in the name. Here are some shots of the bios chipset setup and modbin settings of your bios. It looks like the “CPU Internal Cache” option is missing from the menu but if I’m looking at modbin correctly it’s not disabled.

Well that's weird. Modbin shows it should be visible at LT20, but it isn't show up in the BIOS. What if you change the visible location of "CPU Internal Cache" to the location that corresponds to under "Onboard Parallel Mode"? Might be RT17, not sure.

Put in one place the MS-4144 (4x50) and LuckyStar rev.D (3x66) numbers for 200MHz.
The LSD board can climb much higher, but at compromised stability in some Win95 tasks/tests, used the results for fully stable system.

Put in one place the MS-4144 (4x50) and LuckyStar rev.D (3x66) numbers for 200MHz.
The LSD board can climb much higher, but at compromised stability in some Win95 tasks/tests, used the results for fully stable system.

Have you replaced cache chips on your LS-486E Rev.D? Those 15ns ones don't do any good at 66MHz even with poor 3-2-2-2 timings. Especially the tag because it isn't interleaved and SiS 496 has a hard time accessing it. 66MHz clocking is a challenge to 600nm 5V silicon. I have replaced the tag with 8ns giving SiS 496 more time, though 10ns is enough probably. Still cannot do L2 write back, but that's SiS 496 hitting the limits. Later replaced all 8 data cache chips which allowed 2-1-1-1 timings and even two F244 for memory addressing with zero delay buffers just in case. Onboard IDE still doesn't work very well at 66MHz, but it sucks by design and I don't use it anyway. Other than that and FDD working up to 60MHz, no stability isssues.

+1 to the onboard IDE sucking. I use a promise UATA133 card in mine, makes a massive difference.

L2 cache chips are 8ns for 200MHz (3x66) and 2-1-2 timings.
10ns chips cannot go reliably past 3-1-2 at 3x66.
I can run L2 cache in WB mode but it is same or slower than WT mode, depending on which test/app/game we are looking at, so running the rig with L2 WT.
At this point limitation is the host memory - haven't find a module that can handle DRAM SPEED = FASTEST and keep the system fully stable.
On-board IDE is ok at best - mediocre performance. Don't know why the same chipset does 2x better IDE on Asus PVI-486SP3 motherboard, for example.
My retro activities don't require more IDE speed than what LSD offers out of the box in combo with CF card for ~0 seek time - for example Win95 takes a second or few to load.
Here is a link to a fat post describing the LSD based assembly. 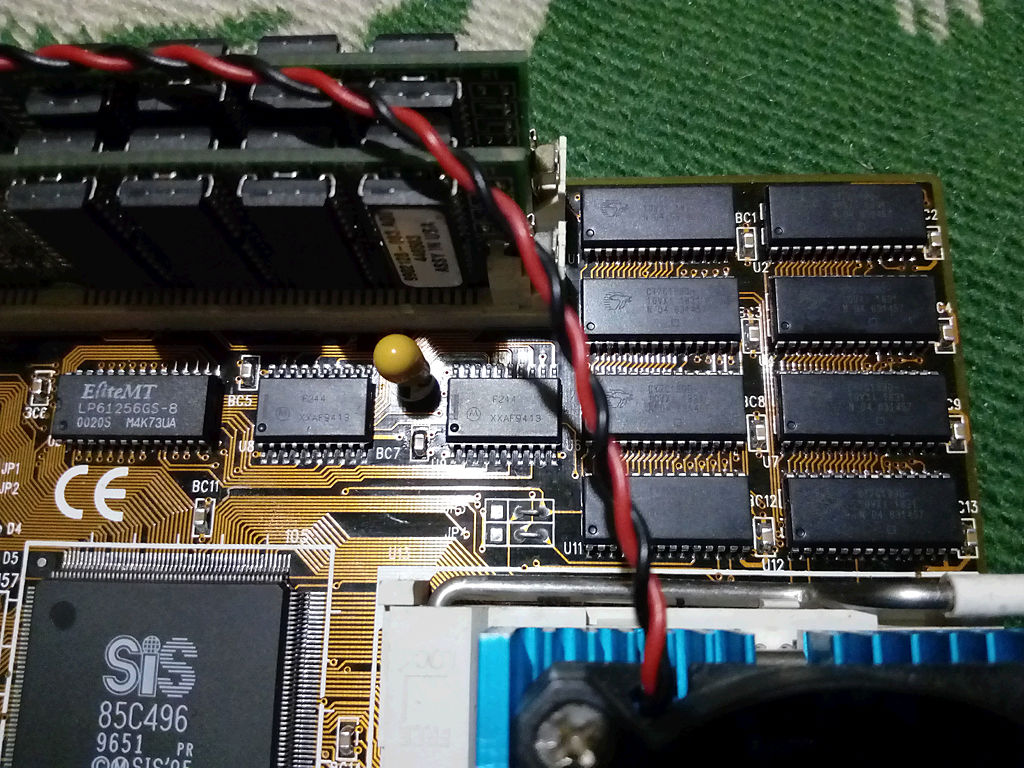 From my and Chadti99's tests and observations:

To climb higher than that you will need 8ns L2 cache buffer.
At that point you can get 3x66 with tightest timings, except DRAM SPEED.

pshipkov, at 3x66 and 8ns tag + 8 ns main cache, with 2-1-2 timings and DRAM on FAST, was the system stable with 64 MB memory? If it is stable, was it hard to find a single 64 MB module, or two 32 MB modules which were stable under these conditions?

it was relatively easy to find a single 64Mb EDO RAM module. 3 out of 8 worked fine.
there is a picture of the 64mb Micron ones that work well with DRAM SPEED = FASTER, also posted pic of the 16Mb modules that handle well DRAM SPEED = FASTEST.
Chadti99 seems to have a 32Mb module that does FASTEST at 4x50 on his MSI-4144.

Didnt borher testing more than 64mb because it is out of the LSD's 256Kb L2 cache range.

I have also replaced all 0805 ceramic capacitors with 10uF ones. They were 100nF originally. Made a difference. You can see them in the photo above, they are taller.

I'm also inclined to think those Cypress 10ns async SRAMs are rated rather conservatively and can do somewhat better. Although they may be a difference between batches.

I have also replaced all 0805 ceramic capacitors with 10uF ones. They were 100nF originally. Made a difference. You can see them in the photo above, they are taller.

ph4ntom, what part number are you using for the capacitors, which for the zero delay F244's, and which locations? Thank you.

ph4ntom, what part number are you using for the capacitors, which for the zero delay F244's, and which locations? Thank you.

You can see two Motorola F244 chips in the photo above just between tag and data cache chips. I have put TI SN74CBT3244DW instead.

I think the capacitors have been salvaged off a dead video card. Probably a 7900GTX or something. X7R type most likely, though X5R will do just fine. I see these are available up to 100uF currently, but no need to go that high.

I looked in my bin, I have ten 0805 ceramic caps at 10 uF. Do you recall how many you swapped? And did you swap every single ceramic cap, regardless of what value was previously soldered? Did you do a before and after w.r.t overclocking to see if there was any stability improvement?

I replaced all 0805 +5V bypass caps near the chipset, cache, memory and CPU. They were of the same value. It helped with stability, but there were several mods in queue, so not measured the effect except my Cyrix 5x86-120 S1R3 could do 2x66 after at 3.45V instead of 3.6V.

I may swap the on-board buffers with the 0-wait ones you pointed to.
Wonder if that will enable a stable 3x66 with no bus divider - performance is epic in that configuration - worth exploring.
Was thinking to try climb that last peak later this year, so your notes are really welcome.
Thanks.

I was thinking that MC74F244 was specified with a propagation delay of 4ns typical / 6ns max, so zero delay may help with a 66MHz bus. Won't hurt anyway and these don't cost much.

What are you guys using for storage on the m919 boards? Recently acquired a 3.4 B/F version and it refuses to boot with my IDE to SD adapter. Although it’s able to detect the drive size in the bios.

@ph4nt0m
Got the buffers. Will swap them in one of the next days on one of the LSD mobos here and see if that improve anything.

@chadti99
The two M919 3.4B/F boards i tried took all of the CF and HDD storage devices i threw at them with ease.
Can confirm that standard Transcend 2Gb and SanDisk 16Gb CF cards worked fine.
Make sure LBA, or was it 32-bit access is turned off - tends to be a problem for CF cards.

PCB is in great condition and of great quality with two exceptions:
1. There was corrosion from leaked battery.
Acid went under the coating and didn't look bad at all but had to scraped-off otherwise would damage the layers underneath.
The fix affected looks but better that over damaged board.
2. After installing a crystal oscillator socket i somehow shorted a 12V line (really silly oversight).
Dense smoke came from the very top rail when turned the power on.
Notice the darkened area next to the power connector. There is more darkening on the back.
Affects optics a little but no functional damage.

Despite the good looks this motherboard does not perform well at all.
The assembly is rated for 16MHz and does not overclock a Hertz further. Tried hard.
In addition to that its clock-to-clock performance is mediocre at best.
Lost interest quickly after started testing it and didn't capture any performance metrics to present here, so you will have to take my word on it.

BIOS has nice options for 286 class hardware.
Everything works well with 0 wait states. 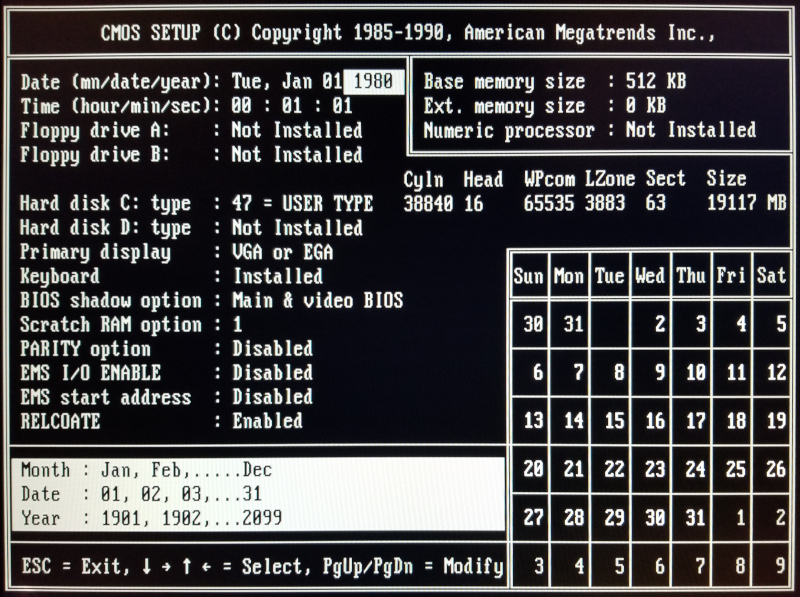