I don't see any suggestion of a 387 from Sphere, he only said math coprocessor. As it's for socket 3, I take that to mean he wants to be able to run the i487 on it's own, which seems perfectly reasonable.

Currently I am not attempting to do a math co processor. It might get added to the pcb later down the road though if it’s determined that it is practical to do so. It was mentioned that there is a particular variant that is super common that would be encouraging to look into this further. But for now, gotta focus on the pin mods and make sure they are understood and stable.

Gonna need the help of someone with soldering skills and a vast socket 1/2/3 processor collection who is willing to do some pin mod experiments. To verify that these mods will work once they are wired.

It may make sense to get the alpha all setup with traces and have a alpha tester order one as a quick way to test the mods themselves and debug the design. This is still nowhere near release stage. So no one should be ordering this yet obviously.

those willing to perform tests to qualify these mods please contact me.

Put in a decent amount of work on this today.

I think I found a way to put the instructions on the unit. they aren't as detailed as I'd like but this is what fits.

Note the holes are still 0.016" which is press fit size and as of yet untested. as it sits this may work with a motherboard LIF socket that has clearance and only the cpu as a shim. I would have to check interp0oser/interstitial socket dimensions and probably adjust.

Anyway, Retro and I are still trying to figure out the amd 133 detection thing. I have two theories currently which I am waiting for Retro to test. one is VOLDET and the other is SETMUL.

It goes without saying that this device is not idiot proof. And great care will have to be taken when setting it, as some pins on one cpu correspond to different functions on another.

Gotta add a note about wt/wb on one of the SETMUL pins speaking of..

By the way, you guys might be able to use this with a modern psu using its 3.3v as a source for the 3.3v no need really for fancy power circuits? just run the wire. (Something that will have to be prototyped by an adventurous soul.) some capacitors between vcc and vss may be a good idea. but here isn't much room..

this is kinda what I was thinking.

Also more adjustments for alpha 6 in the works.

I don't see any suggestion of a 387 from Sphere, he only said math coprocessor. As it's for socket 3, I take that to mean he wants to be able to run the i487 on it's own, which seems perfectly reasonable.

The i487SX is not a math coprocessor, even though it was marketed as one. Definitely not the first thing I think of when somebody mentions a math coprocessor. Not sure why anyone would want to run an i487SX on its own, isn't part of the fun having two CPUs installed simultaneously? Perhaps the people who own newer boards with only one socket feel left out.
A feature that *would* be useful is to let the module be jumpered for i487SX pinout. Sadly, there are some systems with soldered on CPUs and overdrive sockets that only accept this type of CPU (though they can be modded).
I think if you read further up in the post, you'll find the reason why "math coprocessor" made the list is because Sphere submitted a picture of the Cyrix 487S interposer and wondered if that could be integrated into the module. I'm pretty sure it's a 387.

Installing a 487SX disables the 486SX. You will not be running two cpus. Just the one and the other one will only take up space.

Installing a 487SX disables the 486SX. You will not be running two cpus. Just the one and the other one will only take up space.

Isn’t that just halarious. I wonder who first figured that out. Talk about marketing bait and switch 🤣.

Speaking of, I wonder if there is a mod to make it run without the 486sx even installed at all. (Or does it?)

And just like that, we now have a new mod to add to the tweaker!

It looks like if we ground the pin mentioned it will allow the use of normal cpus in 487 sockets. (Not sure if this means without the primary cpu installed at all or not, but seems to work with both installed)

Mod is now added. B14 was already a function pin implemented for setmul. So I just needed to add it to the instructions. Wouldn’t it be interesting if you could use non intel processors there now?

It looks like most processors use that pin for TMS test mode select. It usually has a internal pull up resistor. So it looks like pulling it low at worst case would put it in “test mode” whatever that is, but according to that thread all is well though when pulling it low. So Instructions for it have been added. They did note a memory issue though that was never fully resolved. I asked about it and got this response:

the mod worked but all I remember is that FPU access? IRQ? something had the potential to lock the system
If I recall more I will let you know!

Oh this is handy^

I reached out to you in PM, we should chat on discord.

I think at this point your wishes appear to be coming true, we just need to test them.

This device should be able to divorce the cpu voltage from the mainboard voltage with interposer sockets and allow it to be powered externally. Either at 3.3v or with a external converter of your choosing.

Later on, might give a onboard solution a whirl. But a external solution seems like it would be fine for now.

And the multiplier pins seem to be all wired up, just need to verify them.

looking at some measurements here for the lif sockets and determining which PCB thicknesses will work with them. 0.4mm should work, and 0.6mm should work which is great because 0.6mm is cheap.

The good news is that, unlike socket 7, the male and female portions of the pins are compatible so no need for a different part above and below.

I have a 0.016 socket 7 prototype coming soon that I should be able to use to test one of the 486 pins on. hopefully JLC actually makes it 0.016 and doesn't just use standard drill sizes.
on a previous prototype it looked like they use a small drill and spiral it around in there to get to the right size which works.

obviously you should solder these connections even if the press fit is good if you plan on doing anything with VCC.

the one annoying thing that I am expecting is to possibly have to clip the tails of the pin headers or raise them. pin headers on a 0.6mm pcb is kinda iffy but I think it can work. super gluing the plastic collar to the pcb may help.

It sure wouldn't be justified, but another possibility is adding a Weitek co-pro capability via an interposer 😁

Okay,
I solved the remaining DRCs and beefed up the current paths with this one.

might pull the vccdet function off the board. I added that in anticipation of it possibly being why Retro's cpu won't work.

Some of the setmul pull ups are probably redundant as many chips already have that internally but having it on the tweaker won't hurt anything, especially since they are only on when jumper is set to that function. I put them on the socket 5/7 tweakers because not all the cpus there had internal pull ups. and it's easy to add. with the plethora of socket 1,2,3 cpus there may be a instance of missing pull up.

At this point, aside from any errors in design as of yet unnoticed, or a redesign prompted by new information, I'm pretty much waiting for confirmation of these mods working on actual hardware.

-The POD mods are decently well covered in the video posted earlier, so those should be okay.

-The 487 mod was documented in that thread posted earlier.

-The VCC external power will have to be tested in prototype stage. first with a DVM checking for shorts, and then with actual power.

-It's mainly the setmul pins that I want confirmed (Perhaps you guys have stumbled upon threads showing this mod before? If so, link it.)

-Remaining things to be resolved also: The amd 133 issue RetroPcUser discovered, and the one board that only likes cyrix cpus that Anonymous Coward has.

It sure wouldn't be justified, but another possibility is adding a Weitek co-pro capability via an interposer 😁

On the next alpha I will probably adjust the untapped thru holes. as they won't need soldered I can pull the pads back so the user doesn't have to mess with all of them.

Got it. Sent you a PM. Haven't been online for a few days, I took the week off work so I can sort out my huge mess in my garage I made during moving from one city to another and after parting out two cars. My retro PC stuff is also in there so I've spent the week building a 3m by 2m shelf out of L shaped steel for various heavy car parts.

Got it. Sent you a PM. Haven't been online for a few days, I took the week off work so I can sort out my huge mess in my garage I made during moving from one city to another and after parting out two cars. My retro PC stuff is also in there so I've spent the week building a 3m by 2m shelf out of L shaped steel for various heavy car parts.

-Pulled unused pads back to the holes, and made the holes of those pads 0.019”

Forgot to update silk screen to alpha 8 in images but it's updated in pcb file.

Based on this the Tweaker has been updated. 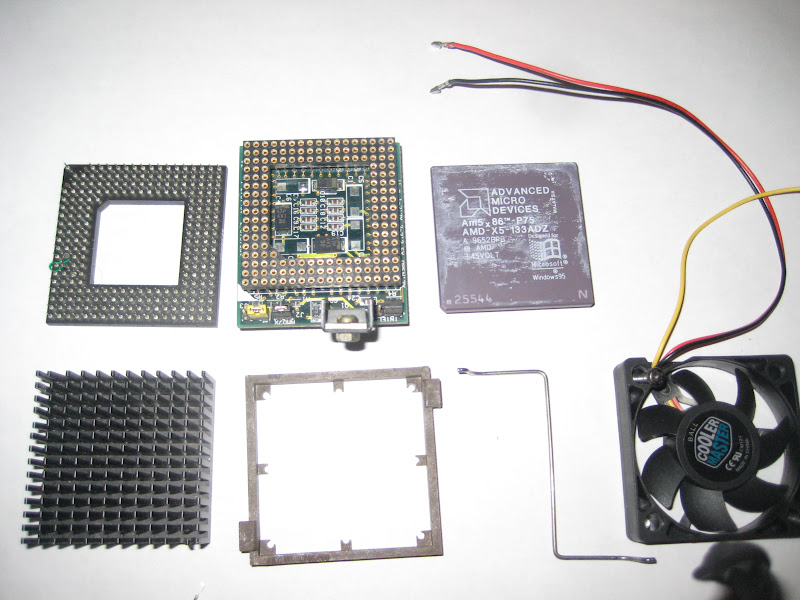 trying to understand how this interposer is accomplishing this, it looks like some pads must be smd and others thru hole and the socket just sits on top of the pcb? which would give a fair amount of headroom between the socket and cpu for extra parts.

I was looking at adding a three pin regulator (or two) to this design to add voltage interposer capability but it turns out that I think the externally powered method may actually be better. hear me out:

Many modern quality PSUs probably have very clean 3.3v rails, and a 486 isn't the pickiest CPU, So simply using that rail just makes a lot of sense. as for higher voltages, just regulate down from 5v with an adjustable quality buck. or if you wanna go all out you can use a lab PSU there really isn't much room for suuuuper fancy stuff stuff on this Tweaker anyway.

To that end I've updated the pico psu adapter for 3.3v output.

Re: ATX to AT pico Adapter!

Fixed some errors, made some adjustments

here is the pico psu adapter btw they each have a spot for the 3.3v wire

Also, these may work as a regulator for the interposer should it ever go that route.