Bought a 386sx motherboard which seemed in a fairly acceptable state given the pictures of the seller.
Unfortunately upon arrival it's not, e.g. some of the socketed chips were reversed in their sockets, and I think they even got switched.

Also no jumpers and a microswitch box all in a "zero" state.

I browsed through all of stason.org to see if I could find the board and know how it should be configured (jumpers, switches).
Unfortunately no luck there, also a reverse image search didn't give the result I needed.

Thanks for your help!

judging by the non-standard rear I/O and the alternative power connector this seems to be some brand specific motherboard, without knowing any more specifics it's gonna be hard to find though ^^
definitely a neat board though with the onboard I/O and VGA

on a unrelated note I'd recommend https://www.ultimateretro.net/en/ over sta*on as that site is riddled with ads and not as comfortable to use, unfortunately couldn't find it there either.

Thanks imi, I figured it would be some brand specific - hoped someone around here would be in for a challenge 😉

The print doesn't state a year anywhere, though I would expect it to be late 80's or early 90's at most.

The system does not boot, and I have no experience or tools to read such a chip.
I think the Intel P8942AH is the bios, as the other one is clearly the VGA bios.

Thanks for the Olivetti hint, I'll try to see what I can find adding that to my search queries.

that should be the keyboard controller, it seems to have both BIOS on one ROM, see how it lists VGA version and SYSTEM version seperately.

... some of the socketed chips were reversed in their sockets, and I think they even got switched.

@imi I think you're right. I'm sorry, never had such a system before. Started out with an Olivetti 8086 as a kid, then briefly jumped to 486 and pentium.
If it's all working or clear what's wrong, then i'll manage. Maybe this is too hard of a challenge, since I don't even know what's wrong with the system.

Do you think a POST test card would work in such an old system?

@weedeewee both the bios chips were reversed in their sockets, with even some pins bent so they were out of the socket.
Where I was hoping to have bought a 'not tinkered with' motherboard that needed some cleaning and perhaps some easy to fix parts, as for example the oxidated crystal oscillator near the back plate.
Also all jumpers are missing, some led's or beeper that could indicate status would help.

I know this maybe sounds like crap, but old hardware is in my experience fairly robust. So I keep my hopes up!

@weedeewee both the bios chips were reversed in their sockets, with even some pins bent so they were out of the socket.
...
Also all jumpers are missing, some led's or beeper that could indicate status would help.

As stated before, one is the bios & vga bios chip, the other is the keyboard controller.
And from personal experience I can say that if the chip was reversed in the socket and the board has been powered on, the chip is now dead. (while the bent out of socket pins might offer a glimmer of hope)
Ergo,
You will need to find some compatible bios to program in a new chip.

as for jumpers, since this is not a standard AT, or baby AT board, any similarity to normal led or button connectors seems unlikely.

Identifying the board without the bios has just gotten a little bit more complicated.
I can only wish you Good luck and hope the internet archive gods will show you some mercy in this slightly frustrating task.

both the bios chips were reversed in their sockets, with even some pins bent so they were out of the socket.

are there markings underneath them? also are you sure they were reversed? measured ground pins?

and as weedeewee said, if you (or someone else for that matter) powered the board with the chips reversed they're most likely dead.

The ones that were 'out-of-socket' would be the Vpp and Vcc connectors from the socket point of view / G and A0 from the IC point of view for the VGA/System bios TMS27C210A.
For the Keyboard bios Intel P8042AH it was only the P21, so perhaps less luck here.

A close look on the socketed chip in the top right corner (cache?) also has the notch not matching.

If anybody else has powered it, I don't know. The guy I purchased it from explained the board was in the same state as he recieved it, so also no luck there.
By now I'm afraid it's getting beyond my knowledge to repair, especially the fact that the chips are reversed.

Thanks for the good luck, sounds like I need it.

If you've got a nice magnifying glass, you can take off the sticker off of the bios eprom. It likely has the UV window to erase it, looking through that you might be able to see damage.
Like is visible in this image. 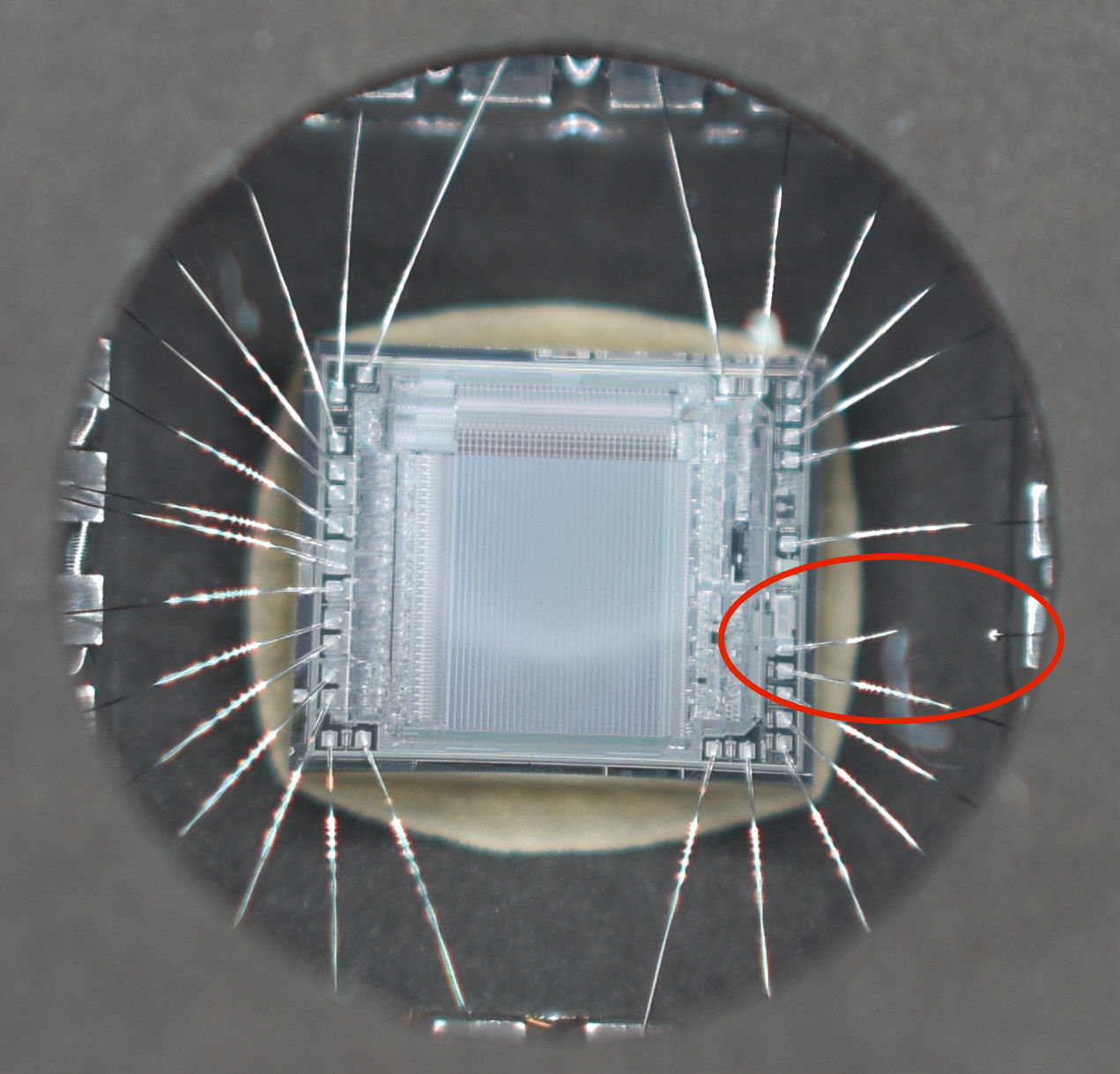 @weedeewee thank you for your help! Very clear on how to spot a defect.
I will definitely try that once I figure out how to restore the bios.
Still like to know the manufacturer and type of the mainboard, perhaps that would also help in restoring the bios if it's defective.

a notch on a socket isn't always conclusive, it should be, but I have been burned... or rather a whole set of cache chips because I relied on it, but it turned out that the sockets were installed the wrong way /o\ hence why measuring if it really is the correct way or not if you're unsure is helpful.

you know, that unpopulated 3x4 psu connector, and those unpopulated connectors right around the cpu seem so familiar... frustratingly familiar since I don't recall where I saw those before.

I have seen them on other computers before, but I also don't remember which ones.
edit: here's one for example: Re: Bought these (retro) hardware today

are there any markings on the backside of the board?
is the large DIN connector on the rear I/O actually a keyboard connector or does it have more pins?

a few more hires pictures of the board would be nice.

First of all a big thank you Imi and Weedewee for all of your help. In the meantime, I did the following:

Took off the sticker and had it under a microscope with LED illumination (as a precaution not to erase the contents) - all wires are intact. So far that's good luck right 😀

As I was now confident the BIOS'es were plugged in correctly, I put in some memory (70ns NEC 424800-70 / optional FastPage), keyboard, monitor and power and switched it on. Unfortunately, no luck.
No image is displayed, but also no 'smoke'.
The keyboard lights for num/caps/scroll go on and off - like normal. I don't know it that's an internal check of the keyboard or this is initiated by the keyboard BIOS?
For memory, I tested both banks with 4x

After ~ 15-20 seconds I switched it off again. None of the main chips felt unusual 'warm'.

Went the next step and took the memory (70ns Samsung KM44C1000AJ-7 / optional FastPage) and videocard (Trident 8900) from my only (working) 486 in put that in.
Unfortunately, again no screen appears. Put it back in the 486, and can confirm the tested parts are still working.

Clueless of my next step - given that I don't have the bios ROM nor the capabilities to load a new rom.
What would you guys do? I really like this system to be operational once more.

Will provide a picture of the backside and i/o panel later on.
The i/o panel has:
- 'keyboard' connector with 8 holes + gnd (on my 486 there are only 5 + gnd)
- VGA connector
- LPT connector
- ps/2 connector

I had a hunch about that din connector ^^, looking at the board closely again I think this might be a video output as well
that might give some more clues as to the origin of this board.

edit: oh look who else used that power connector ^^ http://ummr.altervista.org/ps270mb.htm

Thank you imi for your reply and effort in helping me.

I believe it is a 2 layer print (top and bottom). Though wiring is fairly difficult to follow, I'm sure only 3 connections are on the top side and one (ground) on the bottom side connected to the keyboard connector.
This still is according to an DIN AT style keyboard requirements as far as I can tell.

Since I really enjoy this retro hobby (given some challenges) I will look for a POST card since it may come in handy either way.
Despite the fact that I wouldn't call myself a technician. I think I'm fairly OK in searching information and documentation which usually helps me out.

I really do think the board is 'OK' - it just all looks in overall good shape.
Worst part is on the 'Chips peripherals controller and Bt VSP' image. Some of the connecting lanes have dark spots. Also the back of the LPT port and the crystal in the op of that image has some corrosion.
Do you think this would cause the board not to function? What is your opinion on replacing the crystal? That's something I could try.

With help of your Olivetti hint I found this pocket service guide:
http://minuszerodegrees.net/manuals/Olivetti/ … h%20Edition.pdf
Browsed all the layouts and checked the parts list. Some parts match, but I guess the 'Chips & Technologies' combo was fairly common in those days. So still not sure it's an Olivetti.
(Neat I found the pocket service guide which also has the M240 which was my first IBM compatible as a kid when my dad stepped up to a 486).

Thanks again for helping me out and my apologies if my English is not that correct as it is not my native language.

where are you from if I may ask? or rather where did you get that board... might also help to look for local brands