Picked up a 8086 from '87 today. Inside is in mint condition, no blown caps or battery leakage, but it has no picture. Unsure if it's the monitor or graphics driver, although the very high pitch sound that resonates in my skull tells me the monitor may not be working correctly. Going to test with an ISA card later that has VGA port, this one is a DB-9 one that i don't have other monitors for. I recon there's probably some VGA converters available too.

Back in the day around 1990, I was working during summer between high school fixing these junk. Junk.

They had high failure rate, and PSU is one you never can fix properly as Zenith designed PSU so strangely and use house part numbers on the semiconductors in that PSU. One more thing, DO NOT, I REPEAT, DO NOT KEEP TRYING* that computer until you have PSU completely unplugged from the computer and used a junk hard drive for power load and check for voltage output with multimeter!
The one I had was dead and I waited long time with a partially good 20MB MFM hard drive plugged in, then the hard drive's motor blew big cloud of smoke. 🙁
Best way is to empty the PSU shell and install small common PSU in it from another PC baby AT PSU.

Second, you really absolutely MUST keep the steel shield over the pair of drives otherwise computer will not boot from floppy due to monitor's atop the PC magnetic interfering with them. I found this out hard way.

Third, you are extremely lucky to have an ISA riser, really! And PSU is not rated for hard drive as part of power load. It was a optional part. Lot of them didn't have one even the ones I was working didn't.
The Z148 comes standard with pair of floppy drives.

If someone gave me a Zenith, I'm not interested. I had fill of it. I had a Eazy PC brand new (given to me) didn't like it not compatible due to Nec V40 processor, was lucky to have 128K pack with serial port that is not compatible with much of mouses at hand and we tried many till one that worked and had to solder in 40 pin IDE connector, use XT bus IDE miniscribe 20mb, and install correct burned EPROMs in it for hard drive support before I left for the high school year.
Second, I had to repair a friend's Zenith 8088 memory issue, it was not memory, one TTL IC pin was bent and contact in the socket bent so repaired that fixed it.

I rather have generic 286 at this time or a generic 386DX 25 which I saved up and purchased with the summer work money at same job in summer of 91.

I don't know how retro 939 is these days but I'm tickled to get a SUN branded version of the Tyan Tomcat K8E for $16 plus shipping from "auction site". It appears to come with CPU and RAM. I'm so excited to see my mystery Opteron!

If its chipset supports Windows 9x and DOS, it's retro!!!

If its chipset supports Windows 9x and DOS, it's retro!!!

Well, retro (computer, hardware) means brand new things made to look or work like old ones (ie Pi4 with Pimiga can be called a "retro computer", yet IBM 5170 certainly can not)... So your statement is semantically incorrect 😁

Here's a retro experience then 😄 :
Re: Windows 98SE on a PCI-E only AM4 motherboard

Bought this Expresscard CF adapter. It will finally link directly my daily driver Thinkpad X230 with all of retro notebooks with PCMCIA slot.

Everything that is compatible with DOS and has Windows 9x drivers for me it's retro.

Here's a retro experience then 😄 :
Re: Windows 98SE on a PCI-E only AM4 motherboard

Yeah. That's exactly what you would call a retro computer (especially when put in some vintage-looking case).

Everything that is compatible with DOS and has Windows 9x drivers for me it's retro.

So, the "old" is the appropriate word for vintage PC's or retro PC's for me.

For me all the old PC's that are DOS and Windows 3.x / 9.x compatible are vintage or retro.

There is a pretty strict distinction stemming from the definition of these words:

Vintage something -> something at least 20 years old (AFAIK from Catalan: vint - twenty, age - well, age) - this applies to all sort of old computer hardware and software too (ie vintage computers, vintage games, vintage computer parts and so on) hence the name of https://vcfed.org/ for example...

Retro something -> something made recently to look or work like something old (ie. VW New Beetle reminding old VW Beetle or A500 Mini which looks and works similar to old Amiga 500, retro clothes and so on) - so basically new items, new software and so on.

Retro activity -> using something like in the past (ie. retrogaming may refer to both playing old (vintage) games on new hardware which is topic of this forum, playing old games on old hardware or even playing new games which are intentionally made to look like old games, retrocomputing -> activity of using old (vintage) computers like in the past, but also using new modern hardware in conjunction with old hardware, retro fashion will be a wearing vintage clothes or new clothes made too look vintage and so on).

These words are not synonymous -> they have opposite meanings.

Please don't create confusion by applying your own definitions 😀

Speaking of throwing away, when i picked up the crt the guy told me he had thrown away 100kg of old 90s computers this week while cleaning, only stopping at the crt because it was still in its box. My heart sank a little, but he gave me a goody bag of Pentium 2,3, Celeron and some AMD CPUs as a freebie as well as some ram sticks that he had missed.

Sort of happened to me too. A friend of mine, or more like a good acquaintance told me a couple of months ago he used to fix PCs as a side gig and his basement was full of 90s hardware. Key word is was. The previous year he threw away everything. I almost cried.

Speaking of throwing away, when i picked up the crt the guy told me he had thrown away 100kg of old 90s computers this week while cleaning, only stopping at the crt because it was still in its box. My heart sank a little, but he gave me a goody bag of Pentium 2,3, Celeron and some AMD CPUs as a freebie as well as some ram sticks that he had missed.

Yes the usual tragic shit.. Back in 2018 a guy that did sell me good stuff, and did know i am collector, did give me the phone of a it appear former PC repair shop guy. I did call him ofc, just to find that, a month early the guy did have 2 FUCKING full rooms of old PC HW that he did collect since 1995, (needless to say he mentioned many good stuff like 3Dfx cards even x2 Voodoo 5 5500 cards, old IBM systems such as PC XT, PS1, PS2, 8088 XT no name systems, dual socket boards, Pentium Pros, long ISA audio cards, he mentioned an golden ISA audio card, mechanical keyboards) but as the business was not as profitable as it was before he did close doors... And guess what he did trow EVERYTHING to the scrap, i was so mad and sad, he was as well, for the fact that we did not find eatch other a month early, or even before that real tragedy... If i could at least save the 3Dfx cards, and all the pure rare exotics, i was going to be fine but....

I heard many of these stories from other PC repair shop owners over the years, but the thing with them is that, they did trow stuff like 3Dfx cards, Pentium Pros and other good stuff back in the early 2000s, since they did not have the storage space to hold everything and many things did go. Good at least in some schoold old teachers dont trow away computers and hardware, so i am able to collect everything old they have, keep the good and quality/ high end stuff, sell/ trade the rest...

Which includes many modern computers as with a little work they can Run DOS, win 3.x and even win 9x.

Exactly how far the XP era stretches is probably very personal. For me it's single core, 32bit and AGP anything newer and it's out.

Not really. That's just another misconception like "retro" meaning something old. The word only means "of a certain age or period", there is no number attached to it.

I still can't get over the ~100 pieces of PCs I got thrashed 16-18 years ago. Everything from 386, 486, Pentium and Pentium II era. Some really high quality pieces. Not to mention CRTs... But well... I think we have another thread for this kind of confessions 😉

Not really. That's just another misconception like "retro" meaning something old. The word only means "of a certain age or period", there is no number attached to it.

Picked up my first 486 motherboard complete with DX/4 CPU and 4 sticks of EDO RAM. I have a ton of Pentium and later stuff because that's the era when I began getting into computers, but just recently decided I want a 486 for the real deal DOS experience. I may get a DX/2 CPU for it instead of what it came with. 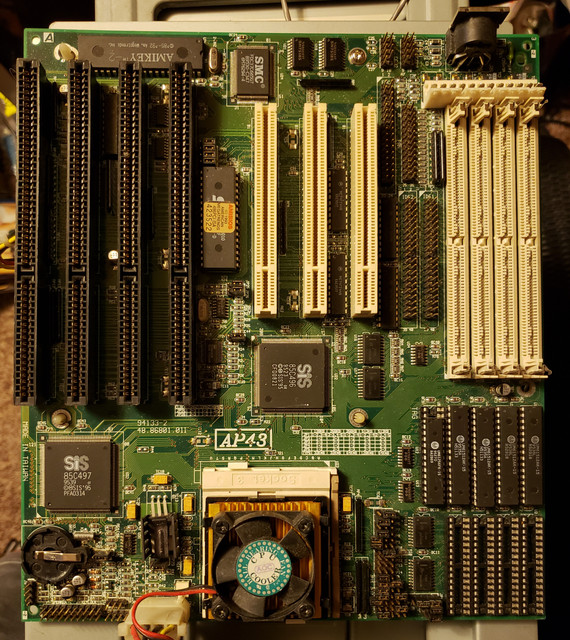 I am celebrating restraint today for not buying a P4 box I saw at a thrift... didn't seem very special, Radeon 9200 in it I think, only onboard sound... an EE badge might have changed my mind, just had normal late P4 sticker... but also I'm trying to get the 30 day coin at the next retroholics anonymous meeting 🤣