It all started a few years ago when I wanted to play DOS games on the go.

I got a Toshiba T1950CT to start off. But what I didn't realize is that it didn't have a built-in sound card. Shoot! So that was out of the picture even though it was a great laptop to tinker with otherwise.

Then I found a Toshiba Satellite T460cdt. This was much better. Fully DOS compatible, good graphics, sound, Pentium MMX, etc. But I found that the build quality was severely lacking.

So I kept looking. On eBay I found a Thinkpad 385XD. This looked perfect, plus it had both the CD and floppy drive internal to the same unit. Great! But then I discovered the Neomagic craphics chip had terrible DOS compatibility.

The search went on and on.

Eventually my requirements expanded. I wanted not only to play DOS games, but do Windows 9x productivity things as well. And have internet connectivity to connect to all the things. Etc, etc.

It's been a bear of a task finding the perfect retro laptop.

Here are the laptops I've gone through so far, in roughly chronological order:

So now I am back to square one again.

I think, however, that I have figured one thing out: there is no perfect retro laptop that will fulfill ALL my needs all at once.

So I have split it into two. Here they are:

The DOS/Win31/Win95 laptop
This will be capable of the following:

Accordingly I have purchased on eBay a Thinkpad 760XL, to assist me in fulfilling the first category.

I am thinking that the two laptops for these categories will be, respectively, the Thinkpad 760XL, and the Thinkpad 600E.

The 760XL has the following specs:

Hopefully I can finally converge on a good setup this way. It will be a lot of configuration and setting things up to get everything to work properly, but I expect it to be rewarding.

I'll document any further adventures in this thread.

I'd be interested to know how the graphics card deals with stretching 320x200 to 800x600. In theory it could just triple the pixels vertically and scale 2.5x horizontally. However since I imagine the panel is 60 Hz there could be some issues with games that expect 70 Hz. OTOH if the card converts 320x200 to 720x400 first and then to 800x600 the result might not look very good.

Depends. Toshiba for example does only integer scaling unless you force "stretch image" in the BIOS. Then you always get a full-screen image, doing non-integer scaling and ignoring the aspect ratio (=very, very ugly).

Probably the IBM Thinkpad 750/755CD.
They made so many of these and they are pretty easy to find in good condition.
Easy to fix, upgrade and repair.
32mb ram max.
Has great driver support in DOS/Win3x/95/OS2.
Support for external display.
IBM provides all the drivers on there website.
https://thinkpads.com/support/Thinkpad-Driver … t/ddfm/380.html

I always loved the Compaq LTE Elite 5000 series. They are pentium laptops, and have a removable floppy drive that can be replaced with a cd-rom drive or a second battery. The hard disk is also very easily swapped.
They had built in sound, a large high-resolution screen, and pcmcia support for ethernet cards or wifi modems. I used to run windows 98 on mine with no performance issues.

320x200 to 800x600 nearest-neighbour scaling for 2D DOS games kind of ruins it for me honestly. And I quite dislike playing them at the non-scaled line-doubled 640x400 resolution, leaving large black borders (this is completely a personal preference, many other people may not mind this at all). For me the perfect DOS laptop would absolutely have to have a 640x480 display.

I know a lot of people strongly dislike the 320x200 --> 800x600 scaling. For me, it is not a big issue. Sometimes the scaler can mess things up scrolling-wise, though, which happens a lot with Neomagic cards. But not the Thinkpad 760XL, if various YouTube videos showing DOS gameplay are any measure.

I don't really any complaints about the Neomagic cards honestly. There are some problem games for sure, but probably 95%+ of the DOS games I like to play look and play just fine on my 600X. The only complaint I have with that laptop is that pretty much any kind of dithering pattern looks like crap with it's scaling.

The 760XL is not bad, I think you'll be quite happy with it if you're fine with nearest-neighbour 800x600 scaling. I downgraded my 760ED from it's original 1024x768 display to a 800x600 one because the scaling on the higher-res display was absolutely atrocious. The 800x600 display panel and graphics card I ended up with (had to change them both) is basically the same as the one in a 760XL. It's probably my favourite 800x600 laptop display (still bothers me, but it bothers me the least 😜 ).

I like to candidate my Acer Travelmate 517TE. It has all the ports you can imagine and has enough power for practically every 1990-1999 game, excluding those that require specific 3D acceleration given by external cards. The only flaw in my opinion is that the build quality is not comparable to that of IBM, but if you find a unit in excellent condition and treat it very well, I am sure that it will last a long time. You can install everithing between DOS to WinXP, i browse slowly but close to perfectly on the web today with it.

This is the spec:

If scaling to 800x600 is acceptable, then my candidate for an ideal laptop is my Hitachi Visionbook. P233, ESS1879 sound chip, up to 128 Mb RAM, C&T65555 video, and all sorts of ports from that time. Very reliable and expandable. It can take second HDD or any stanard laptop IDE optical drive. It even has game port, but it's connector is on port replicator.
Scaling looks fine in most games. It runs all games (mostly late DOS games) I tried. It also runs Win98 fine and I played HL1 on it in 320x200 mode. It works fine with Margi PCMCIA DVD decoder, so I can even watch DVDs on it.
Downside is that these are quite rare and finding parts is tricky. 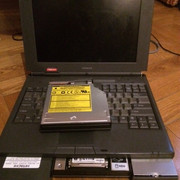 Among laptops that have 640x480 display my favourite is IBM Thinkpad 760LD.

Has SB16 Sound, Gameport and CD-ROM or Floppy but you need to swap as needed.

It has very crisp 640x480 TFT panel
Integrated ESS688 audio chipset
486DX2 50MHz
Everything about it is perfectly serviceable,
has decent keyboard and has Industrial grade build quality ( I have dropped mine on concrete, just blew away the dust of top cover nothing happened to it) 😊

It has very crisp 640x480 TFT panel
Integrated ESS688 audio chipset
486DX2 50MHz - Pentium-S 75
Everything about it is perfectly serviceable,
has decent keyboard and has Industrial grade build quality ( I have dropped mine on concrete, just blew away the dust of top cover nothing happened to it) 😊

Thanks for the input, guys!

Yesterday, just for fun, I finished setting up the Thinkpad 560X to dual boot MS-DOS/WFW311 and Windows NT 4.0. This is not my ideal setup, and this laptop has the Neomagic video and a sound chip on the fritz, but it's cool and fun to play around with NT4. I think the most use this laptop will get is in word processing, retro internet stuff, and terminal things, as I was able to get it connected to my home WiFi network through an Orinoco card.

Tomorrow the Thinkpad 760XL arrives. We will see how it fares.

I was able to get it connected to my home WiFi network through an Orinoco card.

You have to have a network that is either open (no security) or uses WEP instead of WPA/WPA2. There are no WiFi cards that support WPA/WPA2 in DOS, and only one or two of them support it in Windows 98.

I have a separate access point that is broadcasting a second, open network throughout my house. I am not too worried about security in this case because it is a residential neighborhood with nobody in the vicinity who might try to connect to it, and besides that it's too weak to get past my house anyway.

Could also be the difference between WPA and WPA2, or AES vs TKIP.

WPA2 requires hardware support. WPA can work on WEP-only cards with the right software/driver updates, although these were not available for Windows 98 usually.