Ye it’s so small and thin like from the future. I couldn’t resist. Now I wonder about dos sound 😀 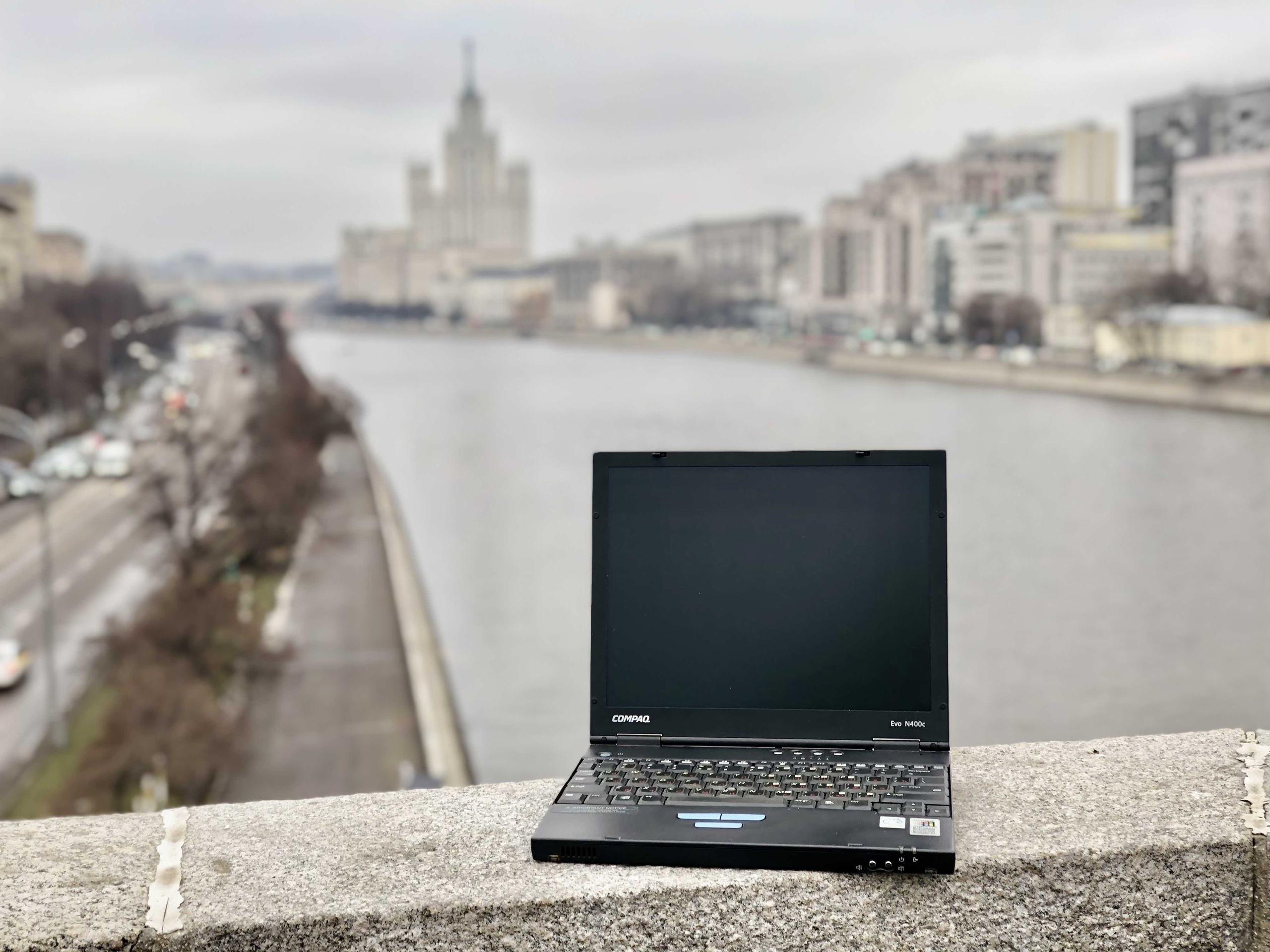 Oh, that's not even the most important issue on the T2x (x being 0, 1 or 2) - there are several more pressing issues on the series:

B) They are known for clicks-of-death, which is a power controller drift/mis-calibration issue that prevents them from powering on. Looks like this was not fixed until the T23 series.

Honestly, there is no tangible differences between the T20 to the T22, the T22 being the fastest of the 3 (they are all Coppermine P3s but the T22 maxes out at 1Ghz). You can in fact mix-match parts between the 3 models.

Yes, the right side frame is fragile and can crack over time, but the old baking soda cyanoacrylate glue trick works well here.

The T2x uses the Crystal Sound fusion CS4264, which is decent on the built-in speakers for most games (the ESS Maestro 3e on my Dell C600 were "meh")

As for the GPU - The Mobility P/M1/Rage Pro LT is about the same or slightly slower than an nVidia Riva128 while packing the same abilities, while the s3 SavageMX/IX performs between a Savage3D and a Rage128 - The S3 tends to have less issues in DOS (one of the few post-'95 chipsets to be able to run Rowan's Airpower in native SVGA mode) and is a decent/competent DX5/6 performer (runs Quake 2 well, Half-Life decently and somewhat okay in Q3A). The real payoff is S3 MeTaL API support in something Iike Unreal Tournament '99, which makes a slight quality and performance difference.

I guess it's not the problem of Thinkpad itself rather than a whole old laptop issue. Right?

Anyway, as I mentioned already, I bought Compaq Evo N400C instead of Thinkpad T22. Compaq looked more interesting in terms of form factor. If you know anything about it, or about its internals I would be happy to hear. First of all about video card (ATI Mobility M1 with 8-MB SDRAM).

My screen is dark and yellow like hell. I wonder if it's hard to find a new CCFL lamp and replace it...

ESS Allegro is my sound chip. No chance for native dos sound?

ESS Allegro is my sound chip. No chance for native dos sound?

If this is a PCI card I believe ESS had DOS drivers for their PCI sound cards. If it's ISA then you are good to go with no drivers.

It's an issue for that particular model range - that panel/CCFL combo is only used on the SXGA version of the T20-22 and some Compaq machines. AFAIK the XGA versions of the machine does not show the same issue.

Based on some precursory looks, It's like a newer version of the Compaq Armada M300s that I used to administer in my career many years ago - 12 inch machines, very thin and has the large docking bay/slice on the bottom, like the X Series Thinkpads or the Dell C400. It has that weird silver Compaq multiport option under the hatch on the top lid, right?

The specs on the M300/n400c looks generally similar - the Rage Pro LT/Mobility M1/P are all based on the ATi Rage Pro series..not great 3D performers, but they all have DVD acceleration circuitry (IDCT/Motion Compensation), good LCD expansion quality and are considered good laptop chips for 1998 (they don't have much of a competition - Neomagic crapped out, Intel bought C&T, S3 is trying to get Savage3D up and running while flogging Virge, WD and CIrrus both got out of the video chip business, and Trident was late to the party and had crap drivers). For a general idea of its performance in Direct3D 5-6, check the Rage Pro writeup on Vintage3D. As for DOS compatibility? Late DOS should be fine (UniVBE 6.5/6.7 supports Rage Pro/Mach64 based stuff) but some DOS games like the Commander Keen series generally do not work well on ATi - I would not focus too much on that. However, I would prefer the N600c myself...it's Radeon M6 based (just like my Thinkpad X31), so the video is almost 2 generations ahead). It's not nearly as slim and svelte, though.

As for sound, the n400c looks almost the same as the M300 or the Dell Latitude C600 (like the one I have) - ESS Allegro/Maestro2 based. Hunt down the ESS Maestro2 VxD audio drivers (it should be available on Vogons) - they include the TSRs and DOS realmode drivers for the card and "should" work. I didn't like the audio out of my C600 very much (the built-in speakers are kinda mediocre, and don't sound as nice as the ones on my T21) but I heard good things about the Evo n400c/n600c - that kind of thing tends to be rather subjective anyways.

Although I haven't played with it in a few years, my Toshiba Tecra 550CDT is a great DOS/Win95 laptop. Genuine Yamaha OPL3 and good DOS video compatibility with S3 VirgeMX. Perfect 1024x768 resolution. Specs in this post:

Ragefury32 thank you very much! I did it! Now i've got sound on my Compaq Evo N400C in pure dos!

Downloaded archive from here http://vogonsdrivers.com/getfile.php?fileid=60&menustate=0
Unpacked content from ES198X.zip\ES198X to C:\
Did WIN+R, typed Sysedit and then followed instruction ES198X

Into config.sys I added :

Into autoexec.bat I added:

Then i rebooted my PC, F8, command prompt only, tried Duke Nukem 3d and GTA 1. Both with Sound Blaster 16, both had sound under dos!

Although I haven't played with it in a few years, my Toshiba Tecra 550CDT is a great DOS/Win95 laptop. Genuine Yamaha OPL3 and good DOS video compatibility with S3 VirgeMX. Perfect 1024x768 resolution. Specs in this post:

Very nice ! Have an earlier version Tosh not 1/2 the machine you have. Am sorta jealous 😁

Anyone remember Omega drivers for ATI? Can i make them work with Ati Rage Mobility? Cause default driver is not perfect.

A small update: I have found a guy who can rebuild my Thinkpad 755C battery. After I get that done, I'll make it my primary DOS/Win31 productivity/networking laptop, or try to at least. I'm getting there.

Anyone remember Omega drivers for ATI? Can i make them work with Ati Rage Mobility? Cause default driver is not perfect.

Check Phil's Computer Labs on youtube - he has a few archived, and Phil used to be active on Vogons. That being said, the Omegas are meant for newer GPUs (M3 all the way to the X1600).
Check the forums on rage3d.com if you want some insight on which driver set to use - I followed the recommendations back when I had a Dell Latitude CPxJ.

Extremely helpful community. Thank you very much! I'll take a look at this guy, and page.

Now I wanna get back to the roots. Since 2010 I have an ultimate retro gaming machine for 1997+ videogames - Dell Latitude D800 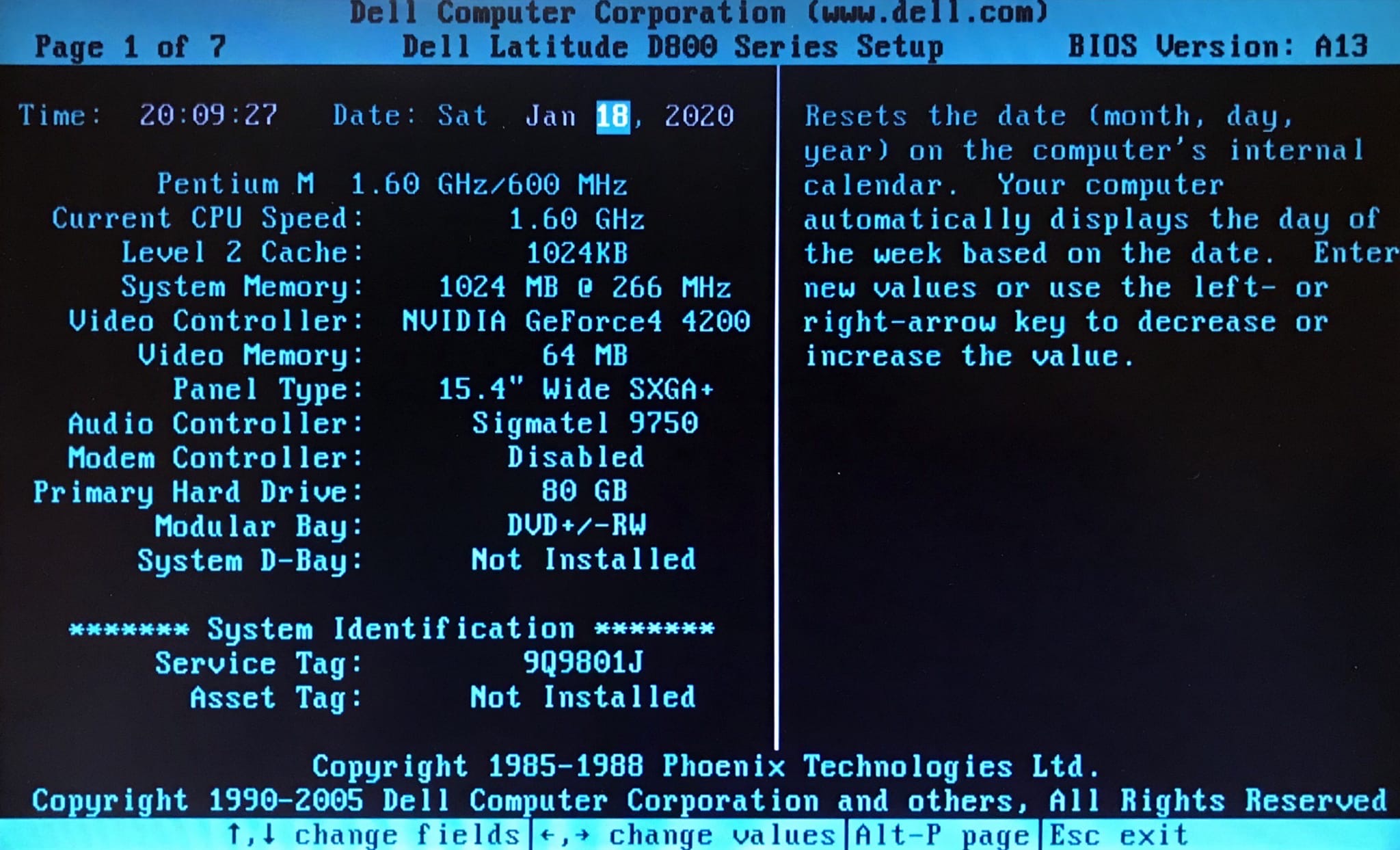 Two things prevented me from playing under DOS (so I ended up buying 4:3 Toshiba Tecra S3, but that's another story)

1. DOS can't keep aspect ratio, so everything is stretched to this wonderful 16:10 screen.
2. I couldn't get sound working under pure DOS.

Maybe you can advise me smth on Sigmatel 9750 AC97 sound? Or it's impossible to get it working under pure dos? Win 98 is okay btw.
And for the screen, maybe there is some custom driver from the old games community to keep aspect ratio?

There is generally no AC97 support for pure DOS (well, there is and there isn't. There were AC97 drivers in development for DOS, but it turned into payware...and development ceased), and as for Win98, there are probably generic WDM drivers for the Realtek/Sigmatel 9750, but whether it works well will depend on many factors.
As for aspect ratios...I don't think HV expansion in laptops have the option to compensate for different aspect ratios. If you want to play games at the correct aspect ratio...well, use an external 4:3 monitor and output there.

There's no such thing as a "fully DOS compatible soundcard" as certain things don't really work correctly in certain cases.

Take this Compaq Evo n600c sitting on my sofa, for example. 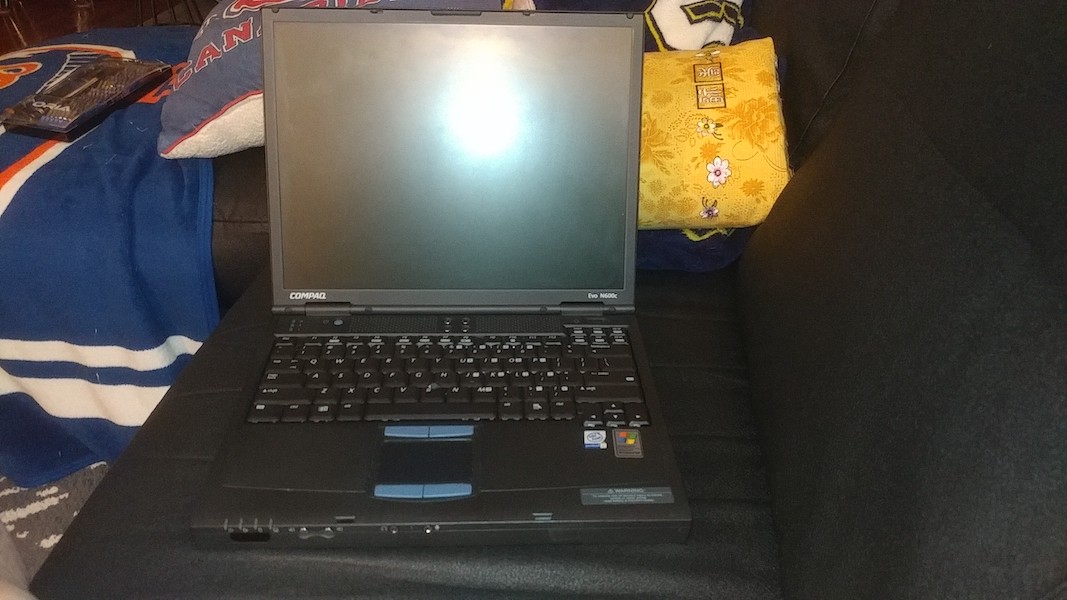 However, the Maestro drivers do not map the volume button bindings to the audio device so you can't control the audio volume in DOS on both the Dells and the Compaqs, while on the IBM Thinkpad T20-22, the Crystal CS4264/4297A dual chip audio setup and its well designed drivers will allow you to control volume rather easily in DOS (it also have some fairly nice internal speakers at the time). The keyboard is somewhere between the Dell and the Thinkpad T2s (so less mushy but still not perfect). The ESS Maestro doesn't have FM synthesis so some of the games sounds rather odd. It'll work, but if you compare it side-by-side with a OPL2/3 equipped machine, you'll notice differences.

As for the video...eeeeeeeh, for ATi Mach64+ chipsets in general regarding DOS - there are compatibility issues with some older titles, especially if it's designed for older VESA SVGA cards (Microsoft Flight Simulator 5 comes to mind, as does Rowan titles) or relys upon non-standard VGA programming tricks to make it function...like Commander Keen. As for 3D performance, it's okay for top shelf Win98 titles like Jedi Knights 2, X-Wing Alliance, UT99 and Quake 2/3, Shogo, Omikron: Nomad soul, or even UT2004 (I plan to do a shootout between a Tulatin P3m and a Pentium-M later, as they are rather similar). That being said, every 3D chipset from that era (even the Geforce 4Tis) will be soundly trounced by an Intel integrated graphics MHD4500 GPU in the Core2 era. Unless you want a WinXP only laptop for DX8/9 specific games (and is willing to pay dearly for it, as the silicon on those old machines tend to die as they age thanks to some poor backfills and solder materials), you are probably better off skipping that entire era and gunning for a Core2 Duo machine (like an old Alienware M11x). The CULVs were great little gems.