Inspired by this and this account (which is more hardware/art than software) I thought about making a list of software that would be matching aesthetically.

It's a little broad and hard to define being a brief "it's the future!!!" period at the turn of the millenium, but you'll know it when:

- Thick round plasticy edges, (transparent plastic if you're lucky), an attempt to look like a pre-G4 iDevice
- Use of light gray with another color, like burgundy, aqua, lime, etc.
- Scanlines, mainly with hues of turquoise, blue or purple (rather than green or amber because that'd imply vintage)
- Softer/chill DnB being more likely (where background music is applicable)
- Striking shapes, half-tones, other patterns
- Certain 'future' typefaces, such as Aero
- No busy gritiness at all, a uniform look
- Probably other things i've forgot about, like gratuitous hexagons

Games:
Battlezone II - for the very blue hud, the very cool hued environments and the color schemes and how the models generally look.
Clusterball - It looks metallic and sportsy and you fly around to pick up colored "BALL!"s. Shiny environment maps on yourself give off plastic impressions
Cosmic Smash - Stylish Dreamcast/Arcade breakout game where you play transparent plastic man in flat looking future train station with chill music.
Deus Ex - should go without saying for the menu/hud and some Michiel Van Den Bos pieces.
Locus - Crap, but ahead of its time in the aesthetic department (1995)
Phantasy Star Online - of course i'm putting this on the list. Look around Pioneer 2 architecture. Go to the mines. Stare at the notWhoWantsToBeAMillionaire UI. The original DC/PC releases in particular, as Blue Burst changes alot of it for a more generic cyan round stuff from the Gamecube version.
Quake III Team Arena - Note I said TEAM arena! The menu system is pretty much this. It's a striking contrast from the edgy red industrial look of the base game.
Ricochet - 😀
Red Alert 2 - Ingame UI looks like a TV's remote control, the colors, the sets and the voice acting are corny to match.
Anything The Design Republic has done (Wipeout, Wipeout 2097, Hardwar, but especially Wip Three Out)

Apps:
NeoPlanet - It's pretty much an IE5 shell that's skinned with some sponsor gimmicks. The default skin is very much designed with this aesthetic. (the skin site for it has long died)
Netscape 6 - Apologies if this sets off bad memories of their downfall but this crap applies here too 🙁
TV card software - like Haupaugge!'s WinTV2000 and 3dfx's 3dfx TV
WINAMP - not winamp itself by default, but some of the skins for it apply.
PlayCenter 2.0 - 1.0's more like WinAMP, 2.0 tries for a more devicey look. The accompanying LAVA! visualizer as well
Windows Media Player 7 - Some of the default skins definitely do apply. This was Microsoft's answer to get at Apple's Quicktime 4 after all.
Windows Whistler - Watercolor was more like this than Luna was.

Ooof, I have one: ATI's Catalyst themes.

Oh man, a while ago I ran across this ASUS "AI Booster" overclocking software that looked straight out of a Sonique skin designer's handbook. It's a little late for this kind of look - this screenshot shows it running on an AM2 board from 2006 - but it totally fits, IMHO. It even has a NOS ("Nawz") button.

this is an interesting software that I archived a year or two back called "Music Maker: eBlitz Edition" by Magix and it definitely fits the bill: 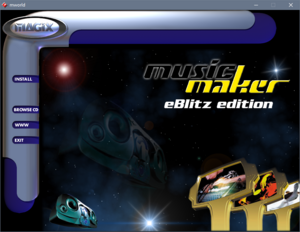 Oh man, a while ago I ran across this ASUS "AI Booster" overclocking software that looked straight out of a Sonique skin designer's handbook.

A lot of overclocking software had highly dubious-looking UIs back in the day, it seems. I saw a really nice gallery of them at one point but can no longer recall where. (Maybe on Twitter?)

All those OC UIs and such are more associated with the weird mid-00s "XP Metal" age though, a time when "gamer" cases started to look REALLY grilly with more lights and tackiness and the motherboard software tries to match.

extreme-g 2 on n64 fits many a late 90s "colored tat" trope, bonus points for that cheesy "3D" main menu UI as well, where they pointlessly displayed the attributes of each vehicle in a 3D circle. i guess hydro thunder is rather worth mentioning here as well, in terms of color scheme.

perfect dark came out at right the same time as deus ex and is cut from pretty similar cloth aesthetically, but with more flourish in terms of menu animation and the gimmick of the menu being a terminal that you can step away from and be ingame instantly. with timesplitters 2 i suppose they tried to go back to this UI style somewhat, after the awfully barebones first game.

on ps1 the syphon filter games come to mind for a cleaner take, the main and ingame menus have pretty distinct styles here. the animated borders in 2&3's ingame menus were somewhat memorable.

for that japanese futuristic style from the time as seen in PSO, digimon world 3's UI comes to mind. and actually from what i've seen, opoona really harks back to 1999-2000 despite being a 2007 wii release...

Most Windowblinds skins come to mind...

- Softer/chill DnB being more likely (where background music is applicable)