According to the Roland RA-50 manual, appendix 6, there is an internal battery.
I suggest everybody consider removing/replacing theirs before it leaks (hopefully the hardware still works without it).
http://cdn.roland.com/assets/media/pdf/RA-50_OM.pdf

So, this isn't gospel or anything, but:

I might try to install a true CM-32L ROM set in there to see if that enables the extra sound effects. I guess it wouldn't be harmfull.

Well, so having now seen the service notes for the RA-50, I can at least say that there is no mention of a MIDI passthrough behavior, or similar, that would preclude the need for either SoftMPU or the hardware modification. This is hardly surprising.

Also, the resistor that I thought was in-series is just a pull-up, so it really isn't necessary to grab the MIDI signal where I'd initially suggested. Instead, pin 6 of either opto-isolator (IC44, 42) can be used. From a convention/consistency standpoint, it probably makes more sense to grab it off of the MIDI (SEQ) input, rather than the MIDI (KBD) input, besides.

Finally, and anecdotally speaking, I'm impressed with the output quality of the RA-50. I haven't done any actual, objective comparison tests between it and a second-gen MT-32 or CM-32L/64, but it certainly strikes me as being rather nice (punchier?). I can only speculate as to what the difference(s) might be, but I do note that the RA-50 uses Rohm op-amps, rather than the commonly-used New Japan Radio or Mitsubishi variety, and has a suffixed reverb chip besides (15239863-01, vs. 15239863).

This is an awesome mod, thank you for documenting it. You can simplify it by using a SPDT switch and using CPU (IC28 / pin 1) as common:

I took MIDI from SEQ IN (IC44 / pin 6) as suggested by Cloudschatze:

I used a DPDT switch because that's what I had on hand. Using one row of a DPDT is the same as using a SPDT switch
CPU (purple) is common

Thanks to Keropi for the help with this

This is really cool. I am glad there is an interesting hardware option to allow people to get an alternate CM-32L.

An Analog Girl in a Digital World

I just converted a second one !

And also couldn't help myself to change out the display again to get rid of that dull standard one..... 😀

Thanks to this thread, Cloudschatzes documentation and SmokeMonsters draft I successfully modded my RA-50! I am very happy that I came to a very cheap MT-32 this way. If you like to see the result, in this video I show some footage and the unit playing Gabriel Knight music here:

I also like to change the display as well but I have to find out where to connect the wires at first so this will be done sometimes later.

Got mine yesterday but its not starting, lcd lights up with a faint top bar but does not react any further.
Anyone knows if there is a service manual for the RA50?

Got mine yesterday but its not starting, lcd lights up with a faint top bar but does not react any further.
Anyone knows is there is a service manual for the RA50?

If anybody has one, the people at Syntaur should have one:
https://syntaur.com/keyboard.php?keyboard=658

Trying to do a search online and the only thing that comes up is for the RA-50 combo amplifier. Why a company would use the same exact model number for two completely different products makes 0 sense.

OR rather.. the RA-50 Combo Amplifier is Yamaha.

Dont think Syntaur has the service manual for sale.
Dont think Roland support will help me get one.
Maybe repace the capacitors can do something but i like to get as much information as possible, maybe its an issue known to some users.

Got mine yesterday but its not starting, lcd lights up with a faint top bar but does not react any further.

It sounds like the unit isn't loading its program code. If the RA-50 Program EPROM (IC34) in your unit is socketed, pull the chip, splay the legs of one side slightly outward, and then re-seat it.

Thnx for the reply Cloudschatze, unfortunately it didn't resolve the problem.
Did also reseated the cm32l eprom.
Measured the Vss on most chips and most of them are 5V, IC36 and IC41 are 3V (probably because of the battery?), IC14 the PCM54HP chip was more then 8V (wondering now when typing if that is correct)(Need to recheck this chip, measured the wrong pins looking at the datasheet)
Replaced the PSU for another one did not make any difference.

Thnx for the reply Cloudschatze, unfortunately it didn't resolve the problem.

Just to clarify, it is exhibiting the following behavior, correct? 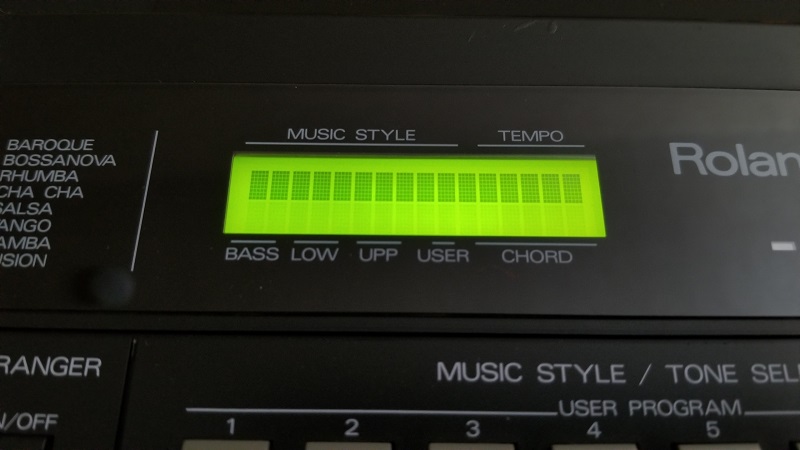 If so, do you have the ability to burn a new EPROM? Of the multitude of things that could yet be the culprit, there's a chance you might just be dealing with bit rot. I'll attach a known-good dump of a version 1.02 EPROM (rename with a .BIN extension), in case that helps.

Wow, yes thats what is see, when I connect the speakers or headphone it outputs a lot of noise.
(Edit: maybe some extra info but without the ra50 eprom it looks and sound the same)
Never knew that can happen with an eprom.
Dont have an eprom programmer yet but i'll try to get one.
Thanks for your help so far! I'll keep the progress updated here.

Update:
Found someone who could program another eprom with the firmware file, unfortunately it didn't resolve the problem 🙁
Maybe this unit needs version 1.00 or more likely it is another problem.
Continue my search for the service manual, hopefully it can provide some help.

Hi there, I recently acquired a copy of the RA-50 service notes and have scanned them: https://archive.org/details/ra-50-service-notes
Hope it helps resolve the issue you're having!

Alternate option: clean the contacts on the EPROM socket and check continuity on the various lines going to the socket? Going by the behaviour with or without EPROM it might not 'see' the EPROM at all.

Hi there, I recently acquired a copy of the RA-50 service notes and have scanned them: https://archive.org/details/ra-50-service-notes
Hope it helps resolve the issue you're having!

Thank you so much !! , hope I'll understand some of the circuit components that I'm not sure about

Alternate option: clean the contacts on the EPROM socket and check continuity on the various lines going to the socket? Going by the behaviour with or without EPROM it might not 'see' the EPROM at all.

Thank you for the tip! With the service notes it should be a bit easier to check contacts hopefully.

[Edit] Removed de RA50 and CM32L eproms, same behaviour. Placed them back and measured all eprom pins, seems getting signal. Measured all IC's operating voltages according to schematic, +5V/+6V and -6V seems all ok.
Maybe someone has some pictures of the solder side of the pcb? Mine seems to have some modifications.