My only CRT monitor, a Gateway vx700. A gift from my uncle after he heard I was looking for one. Using it on my never finished pentium II build right now( can't find the parts I want for sane prices). I plan to get a KVM so I can set up at a few systems in my limited space.

Sorry for the lousy photo, bad lighting in my basement were my retro pc desk is.

What a thing Matte20, as I pressed the button to go to the last page of this thread I wondered if there would be a Gateway VX monitor, and there it was!

This Gateway VX1120 and the Brother CT-1050 are the only monitors I currently possess.

If I could get a certain computer monitor, then it would be a Zenith one. 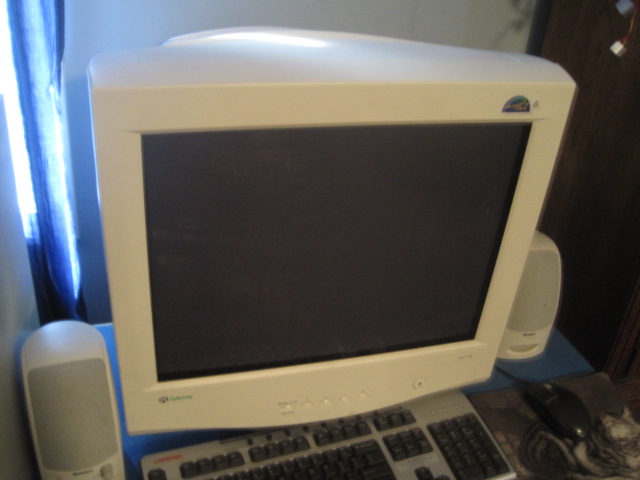 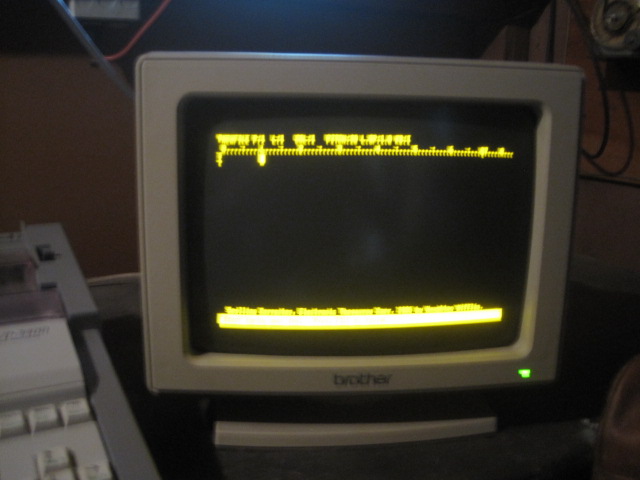 My philips 19" flatscreen was taken in for repairs last week. He called me up to let me know that he's having issues finding a flyback converter/transformer to replace the one that shorted. What are the odds that he won't find one? Are these things only built to fit one model or are generic ones available?

I finally got a table in the basement! 😁

I immediately took that opportunity to quickly set up one of my most prized posessions, my original CRT monitor from 1988 that I used on our first PC and up until at least 1996, so it has seen a lot of use :3
It's an EIZO Flexscan 8060S monitor.
...always been yellowed like that ever since it went into storage more than 20 years ago, it has since lived in the same closet through several moves as well, I now took it out to let it see the light again and just appreciate it, I thought I'd share ^^

I do not intend to clean it further than just removing dust, nor do I plan on retrobrighting it, this is my monitor and that's how it aged 😀
I also don't dare to plug it in yet, as it has sat unpowered for decades and I do not want to fry anything, I might try and take it apart some time to check the capacitors first.

but it being my original monitor is not the only reason why I treasure it so much, I may not have realized it back in the day, but it is also a really good and special monitor, it supports 15KHz-35KHz multiscan TTL and RGB, the original VGA plug converter is still attached to the cable, it was originally first used with an EGA card.

the keyboard I got on ebay a while ago, it is also the same keyboard model we had back then 😀

As a collector of multisync 15khz+ monitors, I like!

I feel these 15" good quality shadow mask CRTs are perfect for DOS gaming. I actually notice less phosphor retention/ghosting on them compared to a 'modern' Trinitron.

Ye already be disturbed; now leave me be. Yer company be toil enough as is.

it's actually only a 14" CRT, but if you like these I might have a few more, need to clean up and move more furniture before I can set them up though ^^

This is really great that you managed to hold on to it! I wish I still had my first CGA monitor from 1987...

I think you should just power it on and play games already, don't be a chicken 😆

PS: really cool that you have a picture from it back in the day. I also remember having a lamp like that on my desk - classic '80s!

Latest additions to my collection 🤣

Yummy! Are the tubes still in decent condition?

My VIGLEN ENVY 14PE I own that currently doesn't work as I'm repairing it's faulty power supply! 😀

I probably won't try to remove it. But it's a shame as all of my Sony monitors have at least some of it scratched 🙁

I forgot to photo another monitor... Samsung SyncMaster 757NF - will do it later. It also has a bit of coating scratched 🙁

From all the monitors I'll pick two or three for daily use with retro computers when I get my man-cave ready... I don't know what will I do with the rest 🤣

Gonna say that when I used to be TV/monitor repair technician in our shop they came across interestingly stuff.

Very well made inside and out, and they were made to be transported all the time.

Also came across one very high end 17" or 20" monitor (didn't remember the brand, that needed repair with 3W3 connector and 5 connections along with regular 15 pin. What a beauty, and very uniquely thing is a compass sensor that deguasses (deguassing coil) the CRT automatically after turning the CRT around. 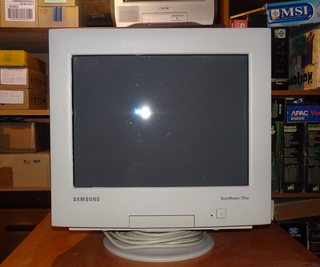 Lol who knew? I knew I was surprised because I could see myself looking surprised.

Just wondering, does your ViewSonic give out a loud 'bang' every time it is turned on ?
Mine does, and have done that since I bought it brand new in box... Not sure if I should worry etc...
Seems fine otherwise, so... (?)

And, what month/year is yours from ?

PS: and in what kind of marvellous shop did you find these monitors ?!
As I notice they even have SEVERAL Voodoo 5500 AGP for sale, on the shelves in the background there...?!! 😮

I'm going to take a wild guess as I had a CRT that did the same thing. It probably does a degauss on every power on.