none at all, I have removed the batteries in my units ages ago...

Searching for "sc-55 battery", google shows this post.
And guess?. Yes, i've brought a SC-55 some days ago, same situation.
CR2032 full of white "acid killer". Just cleaned up a little of the holder/board with Vinegar / isopropilic alcohol.

You're very lucky, man. Good thing I changed the battery on the old SC-55 before I sold it.

Thanks for the heads up. I checked mine out and the battery seemed fine, but I decided to replace it anyway.

Dredging up this old issue again.

I found an identical situation inside my SC-55. But I further speculate, based on the evidence of certain scorch marks inside my unit, that this glue has actually combusted at some point in the unit's history. How dramatic, I know!! The scorch marks ("soot", or carbon residue) are present on the casing ceiling above the nearby heatsink region, and crucially, that black carbon residue are also present fully up one side of all 4 capacitors which are next to the heatsink.

The point being, soot does not occur merely by "gently warming up" a thing - actual combustion has to have occurred. The crusty, brown, bubbly (bubbly = it has boiled) nature of the residue at the capacitor base further supports that speculation.

Therefore I believe this is what happened, in sequence :
1. The heatsink heated up - perhaps in conjunction with heightened power draw scenario, and/or living in a hot country or room
2. This factory 'glue' has melted off from the adjacent capacitors, which are only millimetres from the heatsink
3. Gravity caused the melted glue to form a puddle at base of capacitor
4. Combination of heat, combustible glue fumes, and possibly even electrical short has ignited that puddle - likely a quick, 'split-second' flare up, there-then-gone.
5. Causing black scorch mark above heatsink on case, and black scorch marks up the sides of the capacitors, and leaving hardened, bubbly brown crust of burned glue at base of the capacitor.

This does not seem to have affected the unit's long term operation, though the capacitors' effective lifetimes were perhaps marginally reduced by the treatment.

Something to keep an eye out for, inside your units. For curiosity's sake, at least.

Crazy. I've never seen a coin cell leak like this.

Seems I opened my SC-88 just in time.. some white stuff is emerging around the edges, already. Thanks for the heads-up! 😀 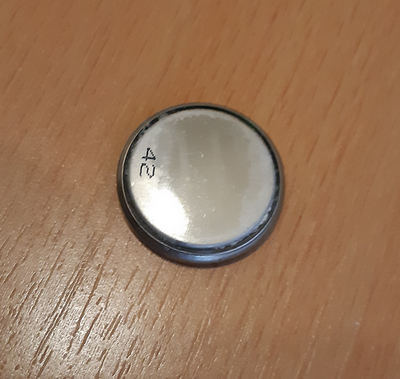 Just opened up my SC-155 and removed the leaky battery. I did not dare to take the top off completely, so I just lifted it enough to reach the battery. Worked out fine in the end.

After 24 years, I bought another Boss DS-330. And I lucked up and got the 2nd revision like the one I used to have (GM and GS instruments plus the GS logo on the screen next to the GM logo). The problem, the seller said the battery was shot and it won't power on. I was all but asleep when I hit the "buy it now" button on Ebay and didn't discover that I had bought it until a day or so later. So I'm going to crack it open later today to see what all has happened to this thing and hopefully I can bring it back to life and use it in ways I didn't know was possible when I had my old one.

So I got the DS-330 apart and they weren't kidding... The battery's gone. So are a lot of the screws. This thing's been opened a few times over the years.

Ordered a bunch of CR2032's from Amazon. It claims they'll be here tomorrow. I also ordered a replacement for the Boss BRA-120 PSU which will show up later in the week.

Is that apparent leakage hard/solidified ? Could it be some kind of epoxy resin instead of capacitor juice ?

That's what I'm hoping. I don't particularly mind replacing a cap if it's necessary but I'm hoping that it's not.

I'll find out for sure when the PSU arrives later in the week.

It is glue used in factory to hold the cap so it can be soldered, no need to worry about it

I just picked up one of these the other day for £30. Boxed with Manual, Midi cable and Boss PSU. Tested it working, and was getting the low battery warning. Whipped it open straight away and the battery was crusty. Cleaned the holder and put a new battery in. Works great. 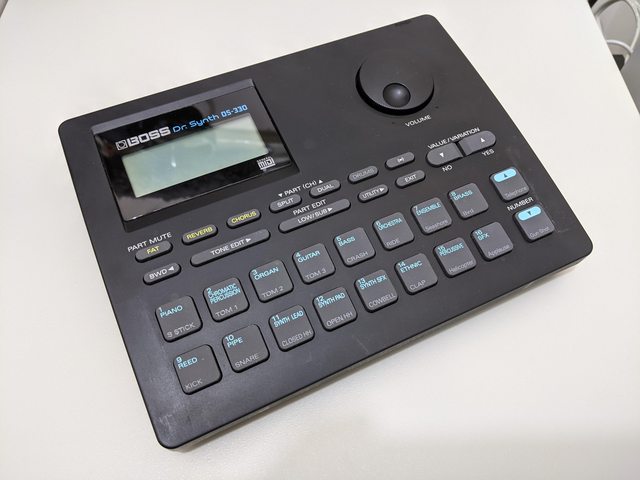 glue eating traces? never seen that... maybe the cap leaked and caused this...

No, there is indeed a glue that'll turn corrosive. I'm not sure exactly what sort of substance it is, but I've seen it a couple times myself in some '80s stereo equipment. And I know it wasn't a leaky cap, because it happened in some places that weren't near a cap.

There's also sort of glue that eventually carbonizes and goes conductive after prolonged exposure to heat. I've seen a fair number of PC PSUs that have failed because of that... and I imagine it made for quite a light show in cases where it shorted stuff on the primary side.

Oh yeah I remember seeing some PSU's with this crappy stuff, it woud turn dark brown over time and actually cause a short.