CalamityLime made this VRM module for these devices. It turned out really well. Huge thanks!!!

Anyone have anymore feedback or anything? I am considering prototyping this but if there is anything more to add…

Calamitylime made a new version of the power adapter.

Considering running the fan to the vcc5 pin.

Also, will update silk screen at some point on latest version to make markings more visible on real world pcb

Hey guys, I think this has marinated long enough, I’m thinking of ordering a prototype, but interested if anyone has any feedback? Any issues with the mods that you see?

I think I may add socket 7 clips to the edge cuts someone requested that, but past that there really isn’t much more that I have come up with to add to this.

In the prototype version I will ponder:

I think most of these can probably remain on the wish list, as they can also make problems while trying to solve them.

-For example, the clip edge cuts may interfere with board clearance

- a fan switch may be doable, if I can find room. (Maybe a solder link)

-The ground pad, I think that will be my priority. If I can get that to fit I will be happy. May have to switch to a terminal block instead of spade smd pads

I have a selection of socket 1/2/3 hardware now but only a handful of different processors. I should be able to test the voltage interposer part for sure with a 5v mobo and 3v cpu but not all the mods.

I also need to decide which pins need to be marked for removal on the interstitial socket.

Obviously the voltage pins, but with socket 1/2/3 being so Cavaliere with it’s pin assignments pins for one cpu do something different on another. It may come down to the user configuring the interposer for their specific situtation and hardware rather than a universal setup.

show of hands, how many are actually interested in a socket 7 heatsink retainer clip?

Decided against heatsink clips for clearance reasons. there are heatsinks that clip to the CPU, these are probably best.

-Cleaned up traces and routing 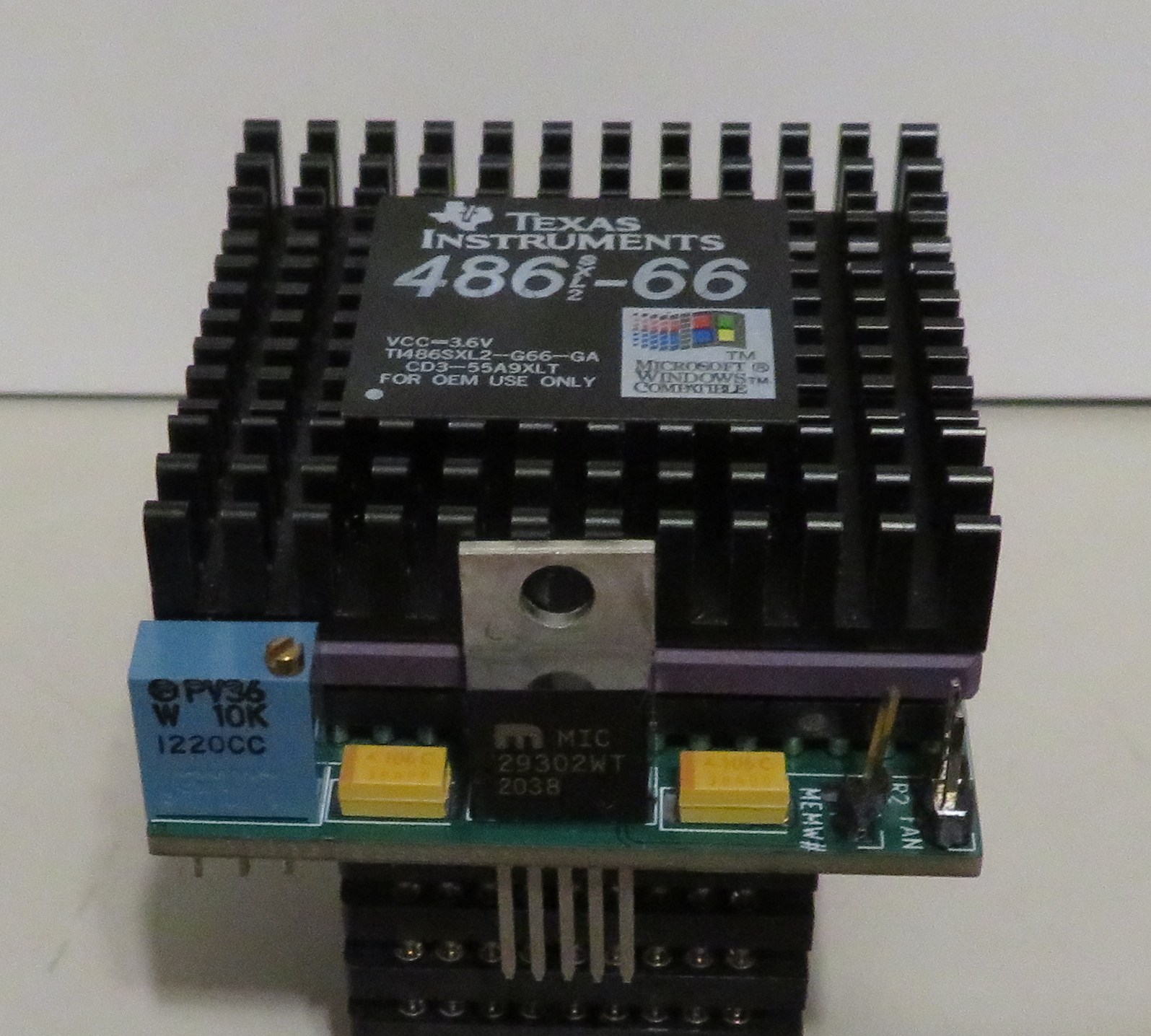 Show of hands, regulator like this, or external regulator?

I could redesign the tweaker to use this regulator. But do we think it will be good enough? Seems like external is the way to go…?

Room is very tight though. I might have to make it bigger, I’m kinda thinking maybe leave as is?

May have to move stuff inside the socket.

Upgrade to a atx psu and run a 3.3v wire and gnd over to the cpu. Easy peasy. And cheap!

I'd prefer everything to be on the interposer. Some people (myself included) do not want to have to do extra mods.

I'd prefer everything to be on the interposer. Some people (myself included) do not want to have to do extra mods.

Perhaps there is a way I can add it between the sockets while keeping the external terminals for those who wish to go that route.? 🤔

Gonna screw up the silk screen instructions though.

Maybe a dual footprint where the terminals are. That might work.

Can prob find a spot for two resistors, trim pot might be a challenge.

You don’t like the calamitylime power adapter with the terminals? It is better than anything I can fit on the tweaker.

I keep coming back to a external in line power adapter or psu sourced 3.3v being better.

With onboard The availability of these components comes and goes and the interposer may have to be redesigned many times over the years to work with the latest available regulator.

Calamitylime’s device is the perfect inline power source. It is buck converter based and is very efficient unlike a linear onboard regulator.

Also the pico atx to at psu adapter was specifically designed to add 3.3v taps to pair with this device and some of my other projects.

So either of those options is very good. Only one is required for power, or third option:
There are a plethora of cheap variable buck based converters available for sale these days that can be bought for 10-20$ The one I bought and tried was shown to be good enough for k6-3+ cpus. A 486 class cpu should in theory be even more tolerant. Though I recommend buying one that meets power quality requirements. It was more an experiment to see how one of these cheap units would work and it appeared to do so.

In any case, at this time onboard power variant is not planned. As I believe that external power is the best course for this project. Note that not all configurations require external power. Only 3.3v cpus require this. A pod might benefit from a 5v molex passive pigtail.

One thing I may add though are decoupling capacitors to this design. This is something I can talk about with the alpha tester, should one come forward.

I have quite a few projects currently. And currently no real need for this device on any of my builds. Which is why I haven’t ordered one myself yet. In time I may though. I could put together a system to test some but not all of its features. A full test would require a large selection of cpus. I have probably 20 486 class cpus now and a hand full of boards including some 5v only boards which would require the 3.3v mod for 3.3v cpus. but not all of the cpus applicable to all of the settings.

That looks like a damn nice design you got there

That looks like a damn nice design you got there