Ok so working from home has it's benefits. One of these is having my MP3 library playing in the background.
What I've since discovered is having an old PC's on for 9hrs pumps out a lot of heat, even if just playing music, who would have thought right?
I decided that I was putting unnecessary hours on my "do it all" S775 XP PC, the fact it's got 2 GF GTX 590's defiantly adding to the room's ambient temperature.

So I went about building a more basic PC out of spare parts, and got distracted. What I ended up deciding on is dusting off one of these 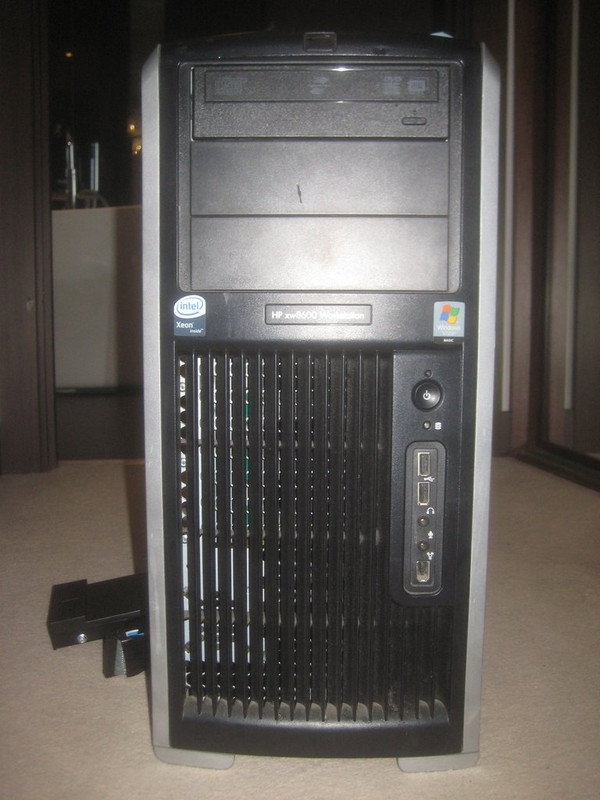 A HP XW8600 with build date of 2008, I've actually got 2 this been the faster with a X5450 3GHz CPU and the "high performance" heatsink.
They came from a Industrial Printer's and either used by CAD or ran a printing press. I suspect the later as both had crappy (and dead!) Quadro NVS 295 cards.
The things are filthy as is everything from that place. Industrial printers are NOT dust free environments not to mention forklifts whizzing around and massive printer's needing lubrication, inks and whatever else.
I know graphics will be a XFX Radeon HD 4890 the best PCIE card I have in my spares list which I got for free few years back. Thing is that 's pretty much period correct for this Vista era workstation. hmmmm
Other hardware is
RAM: 4GB RAM
HDD: 2x SAS 300GB
DVD: Dead SATA drive of some type

First things first was giving it a bath, I'm just letting it dry out now, not after spotless but don't want to need a shower myself every time I work on it.
I've some upgrades in mind. Either cannibalising the other workstation or from a ML350 G5 that I spent good money on last Christmas to fully upgrade only for the onboard VRM to fail.
Let's see how much I can NOT spend on this, the fun begins

I used to work for the IT department of a printing plant a few years ago. I have never seen computers collecting more dust and dirt than those near the printing presses... So yeah, I can relate.
Those HP machines are nice and sturdy and all, but why would you want to run one of them for several hours a day just to play MP3s? Any RasPi, Netbook, old Atom PC, etc. could do that, using a fraction of the power this beast needs...

Yes, a Raspberry Pi with a small host-powered USB HDD is ideal for this. Those 4TB Seagate Basic drives are nice. There's no need to have a full PC running 24/7.

I used to work for the IT department of a printing plant a few years ago. I have never seen computers collecting more dust and dirt than those near the printing presses... So yeah, I can relate.

Yeh most guys in my company hate working there coming home filthy.
I on the other hand I saw the pile of failed RIP Servers, Printer Servers, CAD workstations, etc we kept just for parts and thought I can see an upside here 😉

Here's hoping! I'm actually more familiar with the Dells of this era

and yes I agree this is massive overkill just as a mp3 player but as I said I got distracted 😉 this is much more fun to run up then an old laptop!
It'll also act as my "daily retro PC". Currently I do alot of trivial things like unzipping, sharing out iso's and other tasks on my main XP rig taking advantage of its speed and stability rather then doing it from say a slow P3 and crash happy Win9x. No need to fire up the GTX590's for that. and don't worry, its not 24/7 more like "just" 9hrs (still want shares in my Electricity provider)

Haha i use Z600 with 2x 6 Cores and 48Gb RAM as Daily Driver
Yes a Ryzen 1700 has less Power Draw and equal Performance but.. for just 50 Bucks its really a good machine 😉

I also had G5 with FB DIMMs but cooling FB-DIMM was hell it was running at 75 C° and more some times.. with all Banks fully equipped.

Yes, ex-corporate LGA1366 machines are very cheap 'thanks' to Spectre/Meltdown.

are very cheap 'thanks' to Spectre/Meltdown.

Not only that though. List of vulnerabilities was only piling up for Intel CPUs. But at least typical LGA1366 based on X58 chipset don't have pesky Intel Management Engine.

Who cares about Spectre/Meltdown 😀 i disabled the fixes.. i prefer speed.
I would care more about Windows 10 its the biggest Trojan ever existed.
I only use it to play Games. The Rest is done on Linux.

This is a very good time, one could get cheap Machines with a Lot of Power!
used Computers where never so useful as yet 😀

What is Server 2016 like? I'm considering moving to that when 8.1 is no longer supported.

I also had G5 with FB DIMMs but cooling FB-DIMM was hell it was running at 75 C° and more some times.. with all Banks fully equipped.

Yeh both this and the G5 have active cooling over the ram slots and heatsinks on the ram itself!? When I first saw that I thought it's a bit overkill from HP not like these are going to be overclocked or anything.
After a few minutes yeh ok I can see why they did that now!

Did anyone's work actively replace machines due to Spectre, Meltdown or anything else?
We applied firmware updates to a few clients servers, but even then not many and can't think of a singe client where PC's, workstations, laptops, etc were done.

I can only think of 1 of our larger clients deciding against upgrading some of the machines to Win10 due to this but mostly I think it would still be a case of is it fast enough been the deciding factor of a machine been replaced or upgraded.

Isnt there a Microcode Update for Westmere and Co ?

I had to apply both a CPU microcode update and a Windows update to protect my system. I used Cinebench R20 to test the CPU speed before and after, but the difference is very small, only about 1%.

Did you apply Microcode with BIOS update ?

Yes, a Raspberry Pi with a small host-powered USB HDD is ideal for this. Those 4TB Seagate Basic drives are nice. There's no need to have a full PC running 24/7.

I'm not going to lay out details but there are some people running Windows XP on Ryzen 5. I suspect we'll probably see WinXP on RPi within 2 years.

Did you apply Microcode with BIOS update ?

Clicking on "Update your BIOS" takes you to both downloads. The microcode update requires booting into FreeDOS. (It actually refuses to run in MS-DOS 6.22)

With these two things done, the InSpectre tool reported that my system was fully protected.

I guess microcode is CPU BIOS. (Apologies to the OP for hijacking his thread). Applying the microcode update changes the CPU revision number but doesn't affect the motherboard BIOS version.

Before microcode update, CPU revision is 15

After update, revision is 1F

(IDK why CPU-Z shows a completely different revision number, and why that number remains the same. I guess this is a bug? It also happens with the latest version 1.24.8.)

So CPU-Z is reading the hardware stepping. Minor changes will be made to the design or manufacturing of the chip to correct errata or improve process yields. Not uncommon for a particular model to have various different steppings. In your case B1 is the only stepping/version for the X5687

Intel's CPUID does not directly tell you the hardware stepping for the CPU, but you can infer it by looking at CPUID. In your case CPUID of 206C2 corresponds to B1 stepping Gulftown/Westmere-EP processors. The revision in this app is as you've noticed the microcode version.

With respect to the microcode updates, you are lucky in that supermicro's latest BIOS for your motherboard includes the latest microcode update i.e 1F. This is the same version that is included in KB4056895. So you do not need that windows update, although having it installed does not do any harm.

The performance hit of spectre/meltdown patches was mostly to I/O intensive tasks IIRC. So minimal in most home use cases. Obviously datacenters, cloud providers and the like are way more likely to see the 30% perf drop that was suggested. Easiest way to mitigate that is to buy 30% more servers I suppose.

Back on topic... A someone who has a completely unnecessary, loud, power hog of a dual xeon file server. I approve of this topic and PC.

I've no problem with the hijack, still makes for interesting reading 😀

We do have progress though 😀
I decided it was time to have a Win7 PC in my gaming line up and thought this could be it. Only reason I need it is for Ion fury and C&C Remastered, neither are particularly demanding by todays standards so with that in mind I went with the following hardware.

Upgrade the CPU from the X5450 to a pair X5460's. For such a small jump I'd normally just get a second X5450 but as I had purchased the X5460's for the server that died on me I was damn well going to use them somewhere! 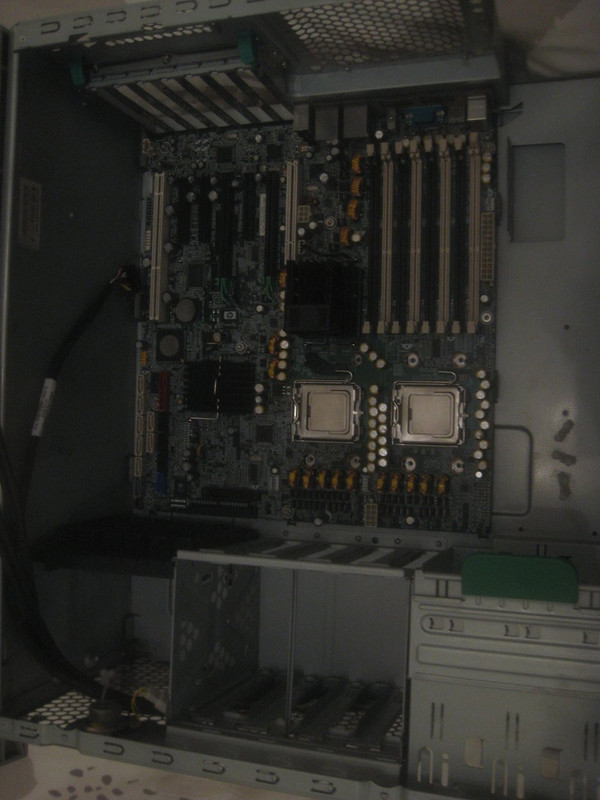 As I was running Win7 I went with the more memory the better mentality. I dug though my stash and managed to find 4 matching sticks of 4GB and 4 sticks of 2GB. 24GB should be fine 😉 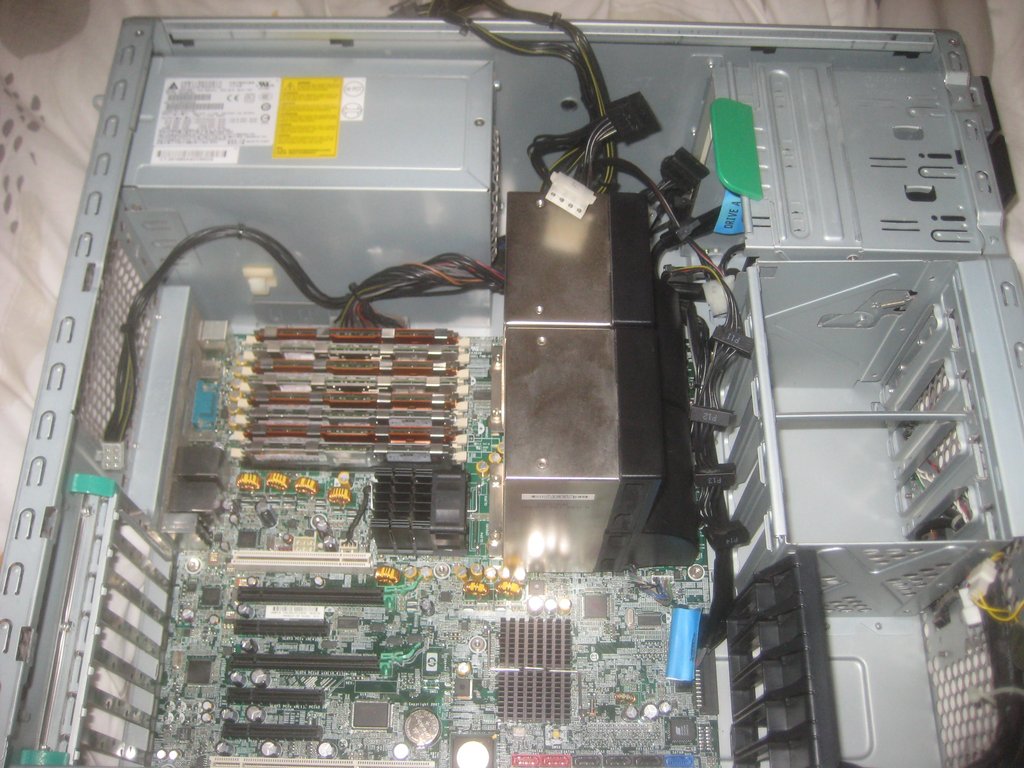 Audio is a Dell SB0770 X-Fi I salvaged years ago without knowing what it was.

HDD I went with 2 stipe arrays just for the fun of it
Array 1 is the 2 original SAS drives off the onboard LSI controller
Array 2 is a SATA array using 2 WD 500GB Black drives I've salvaged from an industrial PC from the same company off the Intel chipset controller.

DVD I replaced with one pulled from a HP PC from the same era, just out of pure chance. 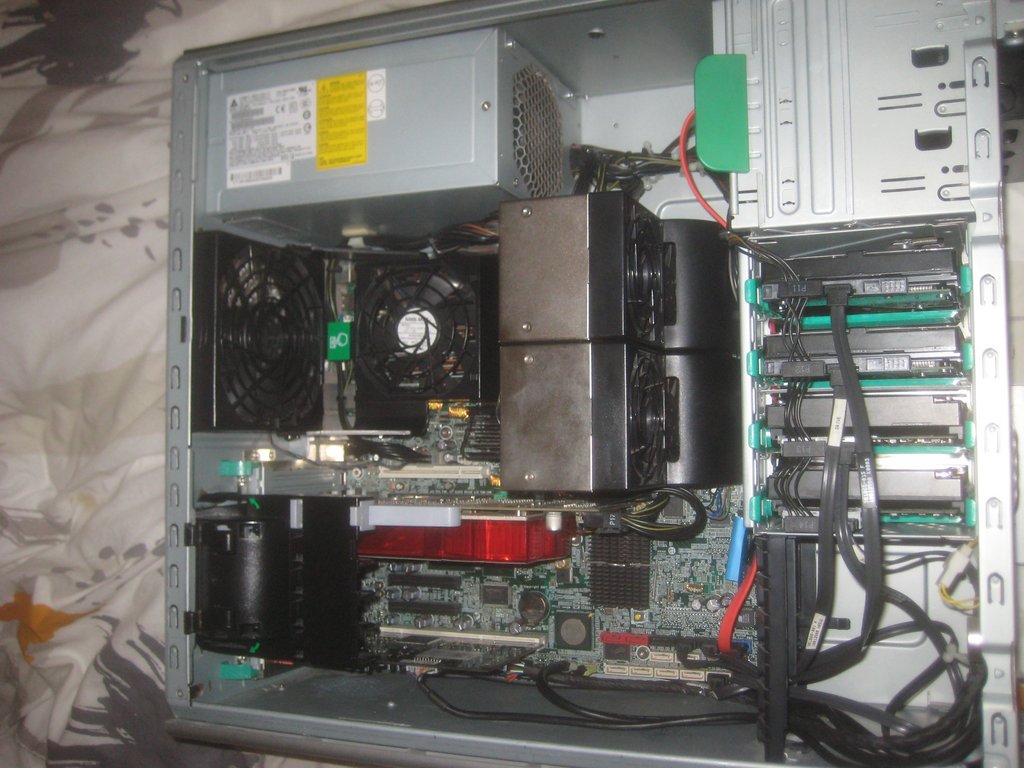 That's pretty good for me who tends to like to upgrade everything as far as it can go.
That said I am on the lookout for matching HD 4890 to crossfire, again just for fun not for performance so not prepared to spend more then around £30
And maybe more ram if I can get it cheap after I see how this goes as the graphics card does hold it back a little but not upgrading that unless it's free.

Just installing Windows now but so far I'm liking how this is going.